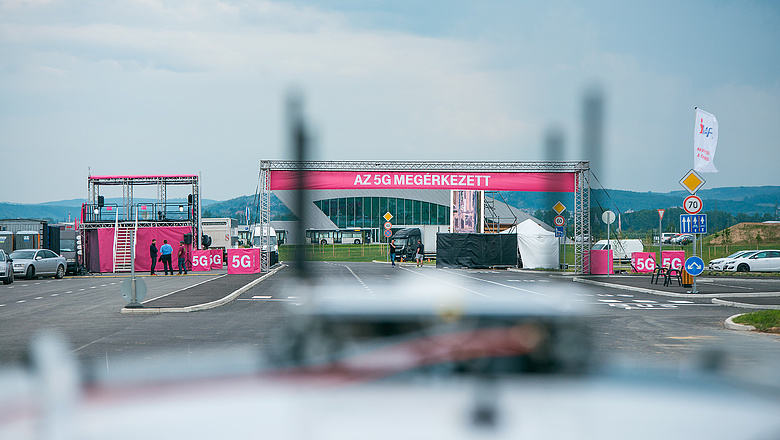 For the first time maneuvers were introduced in Hungary with self-driving vehicles that communicate in 5G networks in an environment simulating real conditions. These included Magyar Telekom, T-Systems Hungary, Ericsson Hungary, Budapest University of Technology, iMar Navigation and APZ Kft. 20 May at the official handover.

In January 2019, Magyar Telekom launched Hungary's first standard 5G test station in downtown Zalaegerszeg. In addition to the base station in the city center, the company has converted its existing tower in ZalaZONE to 5G in order to make the test track suitable for the development and testing of connected self-driving cars.

on the automotive test track on the transmission tower of Telekom on site, an optical broadband connection and the power supply. The test network was jointly implemented by the engineers of Ericsson, Telekom and T-Systems Hungary. At the site, the 5G network is currently operating in the 3.5 GHz frequency band, which has been approved for temporary use by the National Media and Information Communications Authority (NMHH). With the delay of the 5G network in 1

0 ms, self-driving cars can safely communicate with each other via the central infrastructure and an optional control center and respond reliably to traffic situations, as announced by Magyar Telekom

On the developed infrastructure, the Technical University of Budapest presented a special self-propelled test procedure developed jointly with ZalaZONE. The so-called Scenario-in-the-Loop (SciL), a scenario-based test method developed within the framework of the joint research program, aims to blur the boundaries between virtuality and reality, the functionality of autonomous vehicles in a complex traffic situation similar to the real environment under safe conditions. As part of the SciL test framework, the individually designed SMART car responded to the demo environment in virtual space and in real space with sensors – sensors – all of which use the 5G network.

iMAR navigation test vehicles then demonstrated real-time traffic situations according to the recently presented PEGASUS session: the Traffic Simulation Vehicle. Simulation Vehicle) introduced a fully automated mode in front of the ZalaZONE Smart City section, which also uses a 5G infrastructure-based communication system. It will deliver a much better customer experience than it does now. Thanks to the currently significantly higher capacity, tens of millions of devices can be connected to the network at the same time. The potential lies not only in speed, but also in integrated network intelligence and the ability to work with other technologies. With all of this, 5G brings many new solutions to industry, energy, agriculture, transportation, health, education, and almost every aspect of life. The new technology is expected to be available in Europe within a few years – see announcement.

Zoltán Kaszás, CEO of T-Systems Hungary, chairman of Zala's self-managing vehicle cluster, said that Hungary, the domestic vehicle industry, the information communications sector and all relevant local actors were an important event Handover of the automobile test track in Zalaegerszeg. The developments so far – self-propelled vehicles, 5G network, infrastructure and network communication – can be continued on the test track, giving local players a significant competitive advantage at regional and European level, he added. In a rapidly changing world, government, market, research and development actors must shift to traditional roles and create new forms of cooperation. That's why the ZalaZONE test track is exemplary, "he commented.

A prime example of successful innovation collaboration between industry, government and science is the ZalaZONE test track, which, in addition to special tests for conventional and automated vehicles, provides an ideal environment for testing, testing and demonstrating the applicability of the latest telecommunications solutions. Zsolt Szalay, Department Head of the Technical University, Head of Innovation and Research of the ZalaZONE Test Course

At the same time, T-Systems Hungary is introducing the intelligent parking system based on the Sparkon solution the market. The controllers now receive information about the parking area monitored by the sensors.

The goal of a continuous joint development is that self-driving cars can interpret the data of the parking system uncontrolled to optimize the parking time for a greater distance from the parking lot. desired parking space

Index – Inland – Lóránt Budai: We did not expect to cooperate with Fidesz

Homeland: Fidesz officials and cabinet leaders alike responded to the failure of Szekszárd

Jászberény reveals that Fidesz learned nothing from the October 13 defeat