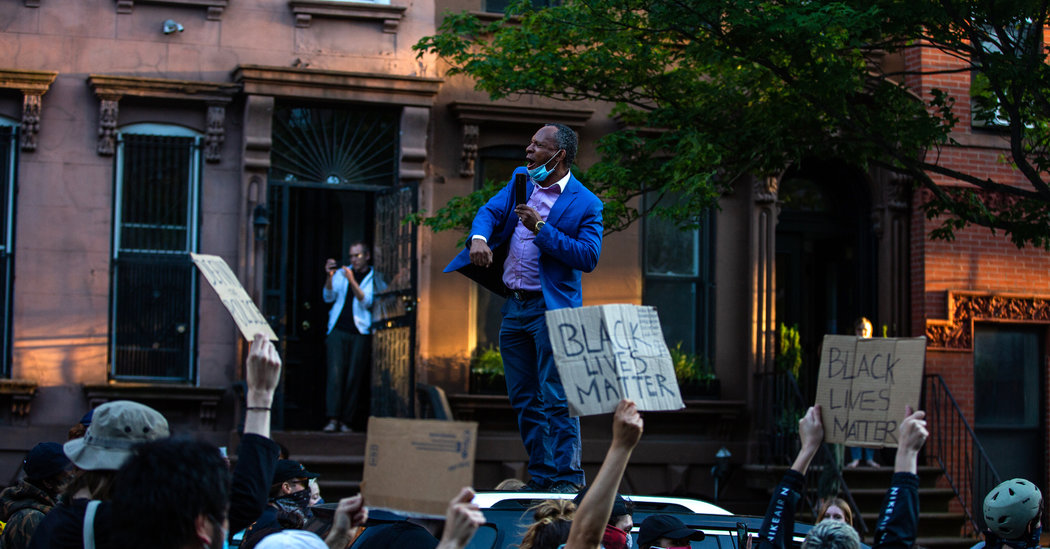 Rewind the scene in front of the Barclays Center in Brooklyn on Sunday evening before the garbage fires, looting and arrests.

A gate agent at Kennedy Airport, Victoria Sloan, stood in the crowd with the setting sun behind her, thinking about the time when the police were harassing her little brother. A few meters away, Daniel English, a young media consultant, was distributing pizza and water to friends at a table one of them had brought with them for free. Cory Thomas, a 40-year-old lead control specialist, held up his phone and shared the scene with an old friend – the two were beaten by the police once, he said, when they were teenagers.

Soon the group would march through the broad avenues and narrow side streets of Prospect Heights and be greeted at every turn with applause and honking horns and salutes with a raised fist. Bryce Stewart, 35, of Bushwick, stopped his bike and climbed on it to see it better.

This mood, one of temperamental, sometimes vulgar, but essentially peaceful indignation, continued until dark. Then, as in each of the previous protest nights, The glass started to break. It started around 10 p.m. on Sunday. in SoHo, when a knot of young men on the edge of a big Brooklyn march smashed a window of a clothing store, stole a jacket, and dragged the entire mannequin onto the sidewalk.

Looting and violence between police and protesters have dominated coverage of protests in New York City around the world, contributing to Governor Andrew M. Cuomo’s announcement at 11 p.m. on Monday. City curfew. The crimes committed have thwarted the earliest arrivals of the protest, those who write slogans on pizza box lids to hold them over, just to see how their efforts are kidnapped by the shady newcomers with their metal bars and stolen clothes.

“There are people out there who are very negative,” said D.J. Elliott, 30, a gym manager in Harlem. “And this is your golden chance.”

Leroy O’Brien, one of the older demonstrators at 63, was less nonprofit in terms of the motives of looters and vandals. “Knuckleheads,” he said.

Night after night, demonstrators of a size without modern precedent have arrived, bringing with them a variety of backgrounds as wide as the city around them. Many of them have come together in the Barclays Center, which rises at the intersection of several old and new, white and black quarters.

Many are young, whether black or white, Asian or Latin, from different parts of the city and districts. They are familiar with their young New York outrage – squint, and you can see the visual descendants of the faces of the Stonewall riots while far superior to them. Many bring personal experiences into the new wave of anger over George Floyd’s death in Minneapolis.

In Barclays on Sunday, hundreds and growing people cheered angry speakers, the supportive honking of passing cars and each other. At his pizza table, Mr. English, 27, who is white, said that Mr. Floyd’s death had made him helpless.

“Avoiding feeling helpless brought me out three days in a row,” he said. He and his friends set up a table with pizza, water, and masks to hand over to the demonstrators.

“People started donating money and going to the store for us to get waterfalls,” said Mr. English. “A bag of granola bars. It was incredible. “The demonstrators offered the police a whole pizza.” They said, “No thanks,” he said, but later asked for water.

Nearby stood Ms Sloan, 27, from Flatbush, watching speakers protest against police violence. “It could be my father, my brother, my uncle, my cousin, my friend,” she said. “It makes me angry.”

She had a central memory of the meeting: “When I was young, my brother locked himself out of the house,” she said. When he paced the street, “three police officers held him,” she said. “I shout:” He is my brother! “Just because you see a black man running doesn’t mean he’s a threat.”

She was going to go early to go back to her daughter Lalin (2) and in case the night turned into trouble – “People are drinking out here,” she said.

The Barclays marches through the neighborhood brought new energy to the group, and neighbors hung out of brown-stone windows to clap, a loud echo of nightly gossip for healthcare workers that had been going on for three months.

When asked why he was marching, said Mr. Stewart, who knows white on his motorcycle: “Why not?”

“I’m more afraid of people who don’t show up,” he said. “This is the last opportunity white America has to listen to the problems of the black community because they have lived in hell and are ready to show their problems to everyone else.”

His rhetorical question – “Why wouldn’t you?” – was repeated hours later by a black man crossing the Manhattan Bridge in lanes closed to traffic. Mr. Elliott, the gym manager, was hoarse with leading call and response calls as he climbed the steep slope of the bridge.

“How can I stay at home?” he asked. “Blacks were the backbone of this country.”

Mr. Thomas, the lead mitigation specialist, shared his march with a friend on FaceTime. “I speak for everyone, all my relatives, all my brothers and sisters who were beaten up by the police,” he said. “Anyone who has been through this situation can relate to it.”

For him, this message should carry the day beyond the looters’ bad deeds. “I don’t approve of the violence or looting,” he said, “but at the end of the day, no 14-year-old should be beaten up by the police.”

Tiffiney Davis, 39, a manager and mother, said she had long worried about her son’s security from the police. She took part in the Barclays demonstrations for the first time on Sunday and was impressed by the diversity.

“I have my white friends out here with me,” said Ms. Davis, who is black. “Now we feel like we’re getting a little bit of strength.”

Nearby, 18-year-old Gabe Jones from Sheepshead Bay, Brooklyn, was there for the first time – it was actually his first protest anywhere. Mr. Jones, who is black, said that his own background with the police – an officer once broke into his house and an uncle lost his teeth in an argument with others – his reaction to the death of a 1,200-mile man influenced way.

“The world is watching,” he said.