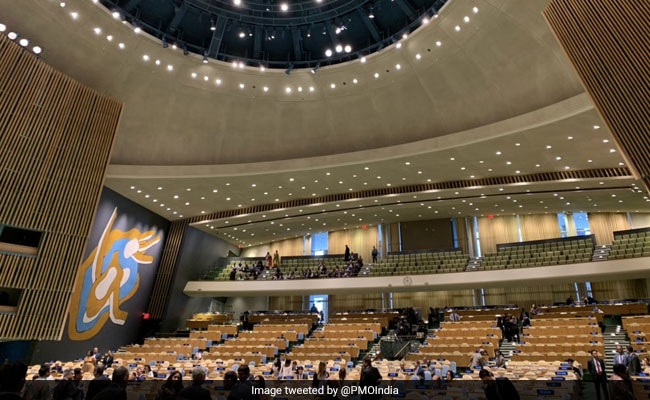 7;s comments and urged the United Nations to take the floor in response to the statements Exercise Pakistan.

Imran Khan had previously stated: “Pakistan has always called for a peaceful solution. To this end, India must lift the measures introduced since August 5, 2019.”

#WATCH This is the same country that provides state-funded pensions for feared and listed terrorists … We call on Pak to evacuate all areas of illegal occupation: Mijito Vinito, First Secy, India Mission at the UN India exercises right to UN Reply to Pak PM at UNGA pic.twitter.com/PiXDSZAYTJ

In its response to the Pakistani Prime Minister, India insisted: “The only dispute in Kashmir concerns the part of Kashmir that is still illegally occupied by Pakistan. We call on Pakistan to evacuate all areas where it is illegally occupied.”

Imran Khan’s virtual address had the same allegations and allegations against India that he made in recent speeches to multilateral fora.

Following his speech, TS Tirumurti, India’s Permanent Representative to the United Nations, tweeted that the country would use the “right to reply” feature to respond to Imran Khan’s address.

“This hall heard the incessant ranting of someone who had nothing to show for himself, who had no notable success and no reasonable proposition to offer anything to the world. Instead, we saw lies, misinformation, warmongering and malice spreading in the assembly. The words used by the leader of Pakistan (Imran Khan) today at this great gathering undermine the very essence of the United Nations, “said Mijito Vinito, First Secretary of India’s Mission to the United Nations.

India exercised its right to reply to all the country’s speeches in the high-level debate at the 75th session of the United Nations General Assembly, which concluded on Friday. This is usually the case when countries exercise the right to react to statements made against them by another country.

The Pakistani Prime Minister’s anti-India statement on Friday and India’s response make India the third right to respond. The first two were also issued in response to Pakistan taking up the Jammu-Kashmir issue during the ongoing 75th UNGA earlier this week.

Mr. Vinito said Imran Khan “is the same person who called terrorist Osama bin Laden a” martyr “in his parliament in July”.

He went on to say, “For a nation buried deep in the Middle Ages, it is understandable that the principles of modern civilized society such as peace, dialogue and diplomacy are far-fetched.”

Speaking of the Pakistani Prime Minister, he said, “The same leader who spat poison out today publicly admitted in 2019 in the US that his country still has around 30,000 to 40,000 terrorists trained by Pakistan and in Afghanistan and Afghanistan have fought the territory of the Indian Union of Jammu and Kashmir. This is the country that has systematically cleared its minorities, including Hindus, Christians, Sikhs and others, by abusing its blasphemy laws and forcing religious conversions. “

Pakistan has been characterized as “someone who poses as an advocate of Islam. This is also a country that has promoted the killing of other Muslims simply because they belonged to another sect or region in Pakistan and sponsored terrorist attacks against them.” his neighbors, “he added.

The First Secretary said: “What should be on the agenda of the United Nations is the deep state of Pakistan and its relentless political and financial support for terrorist organizations and mercenaries who pose a threat to global peace and security. The only crowning glory that this country has been showing the world for the past 70 years is terrorism, ethnic cleansing, majority fundamentalism and clandestine nuclear trafficking. “

“The only way for Pakistan to become a normal country is to get rid of its moral, financial and material support for terrorism, to draw its attention to the problems of its own people, including its minorities, and to stop the abuse of UN platforms, to advance his nefarious agenda. ” completed the statement.