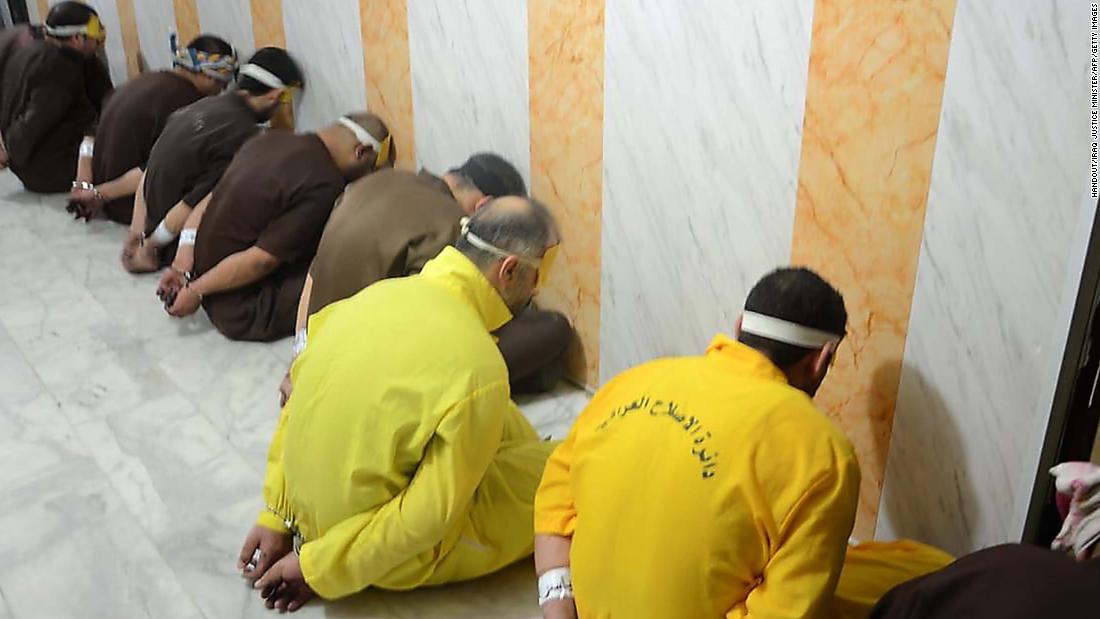 Abadi ordered "immediate implementation of the just punishment for death-row terrorists whose sentences have passed the crucial stage," his bureau said in a statement on Thursday.

Since then hundreds of prisoners have been sentenced to death by Iraqi courts Mosul and the surrounding area have been reclaimed by ISIS, Reuters reported in April.

"The criminal justice statistics show that 815 people were brought to justice and that 212 were sentenced to death and another 150 were sentenced to life imprisonment," said Judge Abdul-Sattar al-Birqdar, a justice spokesman. told the news agency at the time.

"The vast majority of these judgments were against elements of the terrorist organization of the Islamic State who have been proven to have committed crimes and came under public procedures conducted in accordance with the law, defendants were granted their rights," Birqdar said.

At the direction of the Prime Minister, Iraqi officials carried on Thursday a dozen ISIS members, adding the testimony from Abadi's office.

"Based on instructions from Prime Minister Haider al-Abadi, executions were carried out by twelve convicted terrorists on Thursday," the statement said.

The executions came a day after the bodies of eight Iraqi security forces, believed to have been killed by ISIS fighters, were found Wednesday.

Amaq, the media of the terrorist group In a short video on Saturday, in which six men were held hostage, they demanded the release of IS – inmates and relatives of Iraqi prisoners. In a separate Amaq statement, ISIS said they held eight men hostage.

The militants in the video gave the Iraqi government a three-day period to release the ISIS prisoners and threatened to kill the hostages if their demands were not met.

The murders triggered anger among ordinary Iraqi people for not acting quickly to act.

"This is a very important meeting, first we offer our condolences to the families of the victims and today we make another promise that we will arrest or kill them, that is a promise," Abadi said.

The Iraqi Prime Minister said early forensic reports revealed that the hostages had been killed almost a week ago, suggesting that IS had lied about the three-day deadline.

ISIS militant groups are still able to launch attacks against Iraqi troops and civilians Abadi officially declared in December the complete liberation of Iraq from ISIS.

The tit-for-tat nature of these killings – though a state that executes convicted terrorists can not disagree with terrorists who murder hostages – is an unpleasant reminder of how the sectarian Sunni-Shiite disgust in the heart of the rise of ISIS has not disappeared along with the physical "caliphate" of the terrorist group. The security forces of the Iraqi government have a strong Shiite element, and ISIS has always been the ugly voice of disenfranchised Iraqi Sunnis.

Iraq has managed to move away from an exclusively sectarian outcome to the fight against ISIS with some caution. Abadi has endeavored to calm down sectarian tensions as the best way to defeat the radicals of the IS and seems to remain in power with the help of a powerful Shiite nationalist – cleric Muqtada al Sadr. But IS's ability to kill hostages cold-bloodedly shows that they have territorial influence and the ability to shock.

The mass execution of dozens Convicted ISIS terrorist sends a strong signal internally that Abadi intends to end the IS fight regardless. While Western human rights activists can stifle the quick "justice" of Iraqi courts, where guilty sentences and verdicts are imposed within hours, this is not unpopular for Iraqis who have been experiencing ISIS terror and war for years.

In fact, some of the Iraqi security forces we spoke with during the Mosul offensive have fiercely discussed releasing ISIS prisoners who captured them for fear of a corrupt court system in order to re-fight the government for less of a moral dilemma to the West. These ISIS fighters will not be rehabilitated overnight. Their legal death by one of the few governments in the IS war with which the West can do business is obviously a plus for Western security officials who want to stop the attacks of the IS latecomers on the European continent.

Even though we do not know who these dozens of convicts are on death row, many will be foreign and face the endless dispute among NATO allies over how to fight their citizens who joined ISIS, but now In Kurdish prisons run in northern Syria, this dirty, but quick fix may be relatively welcome.