Ministry of Health draws a lot of salami for salmonella 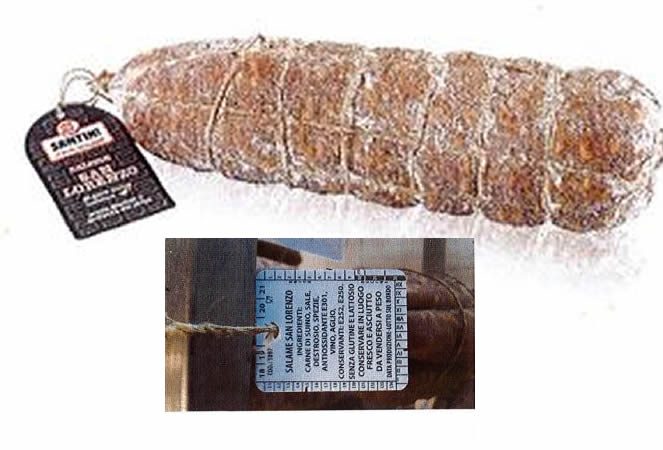 A new notice on the Recall of Food for a possible microbiological risk to consumers was released today by the Department of Health through the section of its portal dedicated to safety information and product recalls by operators. This time it concerns a quantity of salami, which was sold completely in pieces to a kilogram each. According to the Declaration of the Ministry of Health of 1

7 June 2019, the number sold under the brand name San Lorenzo and sold by Santini S.r.l. salami affected by the notice. in the factory in the Via Mother Teresa of Calcutta in Torre De & # 39; Picenardi, Cremona province (mark IT P9Z6E CE)

The reason for the withdrawal of the salami indicated on the shelves can be found in . possible presence of Salmonella spp in the specified batch. As indicated in the recall notification, the alarm was triggered by random controls that signaled the presence of Salmonella. For safety reasons, therefore, the recall of the entire lot was decided. As always in these cases it is recommended not to consume the product, but to return it at the point of sale. The warning comes a few days after a similar call, but again it had affected a lot of bratwurst due to the potential salmonella risk. The main reservoirs of Salmonella, one of the most common bacterial agents in food-borne infections, are in fact animals and their derivatives (such as raw, unpasteurised meat, eggs and milk). The causative agent is responsible for salmonellosis, which is transmitted by ingesting contaminated food or through contact, and is most responsible for gastrointestinal infections, which can lead to symptoms such as vomiting, diarrhea and abdominal pain.

Unknown virus discovered in ancient human remains. “It could be the cause of breast cancer”

Eating ginger before bed: here are the benefits

Put bananas in the fridge: this happens