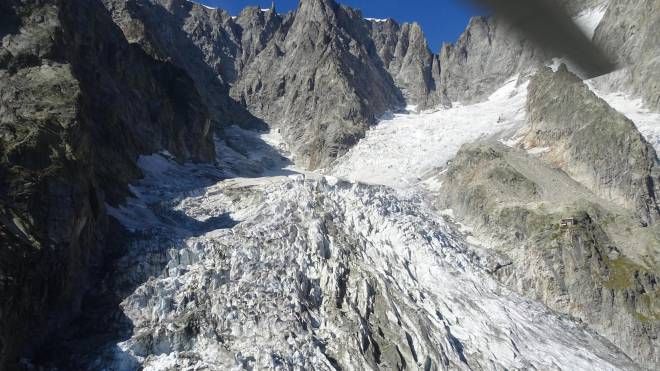 Rome, August 6th, 2020 – Fear returns to Val Ferret. And the reason is always him: that Planpincieux glacier of Mont Blanc. Between September and October 2019, the “giant” on the Italian side of the massif threatened the population due to its progressive “slide”. At the time when the danger affected part of 250,000 cubic meters, the alarm was triggered after that possible booking an even larger part of the glacier (a “new sector” of around 500,000 cubic meters), which forced the authorities to evacuate residents and tourists from the area.

Operations have been underway this morning and include around thirty houses in the lower part of Val Ferret (Courmayeur). The evacuation was decided yesterday by the mayor of Courmayeur, Stefano Miserocchi, at the end of a meeting with regional technicians who provided the picture of the situation given the expected increase in temperature. New breakdowns are to be feared.

Carabinieri, financial police, disaster control, forestry, fire brigade and municipal personnel are active on site. According to an initial estimate, a total of 70 people (15 residents and over 50 tourists) are people for whom an evacuation is planned. However, the exact number will only be known in the next few hours.

Measures to monitor the glaciers have been underway since last autumn (the road in Val Ferret was closed until November 13). The “anomalous temperature trends” affect the movement of the glacier mass, with an expected increase already today, on August 6th, after days of relative cold. The “risk situation will have an estimated short duration of at least three days”, says the municipal ordinance. People outside the red and yellow zones can choose to stay in Val Ferret for at least three days “if they believe they are independent (including in terms of food supplies)”.

In cooperation with the Red Cross, the displaced are gathered at the Courmayeur ice rink for a first reception. “For the residents, we will evaluate the solutions to be found,” while “tourists will have to find other solutions,” said Miserocchi yesterday.