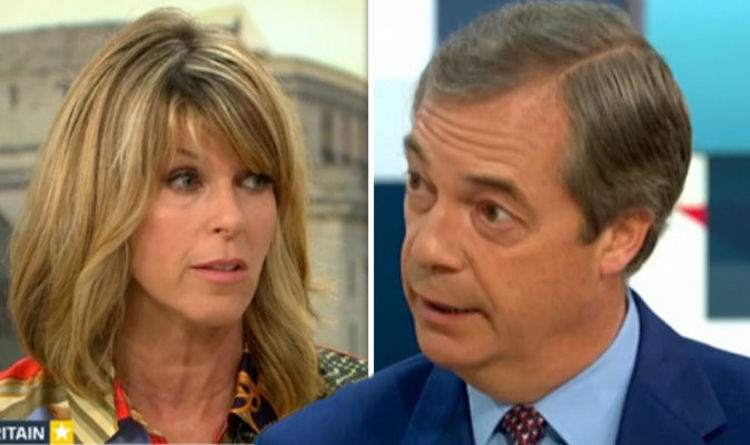 Nigel Farage appeared today on Good Morning Britain alongside Garraway and Jeremy Kyle to discuss his decision to return to the public with a Brexit campaign.

But when Garraway pushed the businessman for answers, the couple was in distress.

Farage began the discussion to explain how dissatisfied he was with the Brexit trial.

He said, "I've seen a prime minister get up and say, Brexit means Brexit, we're taking control of our borders again, and doing the opposite."

Farage continued to criticize government officials when he insisted that the general public was "screaming" for real leadership.

Theresa May told Farage, "I think this Prime Minister was one of the weakest I've seen in my life.

But Garraway was determined to hold Farage accountable for his role in the Brexit campaigns given to the NHS when Britain leaves the European Union.

"There still seems to be no obvious solution and things "I know you've never said that," Garraway began.

However, Farage started talking about the moderator and asking them to say, "Stay tuned, Nigel."

But Farage continued, "How about being free?"

"Wait, you have to answer a question," Garraway insisted

"You said that maybe you did not really say that, but you do not have it denied, as it went around. "

Farage was clearly not pleased with the question when he exclaimed:" Don do not do this. "

But Garraway urged the problem:" Do you have any answers to the solution? "

Farage stressed:" We had a referendum, we voted for something and our politicians should deliver it.

He also criticized the politician's "condescension" to the British public when it came to Brexit.

"If our politicians think that they can get away with talking to our people as if they were stupid, they would be shocked." 1

9659002] Later in the discussion, he added that some politicians were the result of Referendums "betrayed".

"It was not the best of three, we were told you would decide, we will honor it, you betrayed it, I intend to teach them a lesson," he said.

Farage also addressed the issue of whether there should be a new leader for parliament and who could fill May's shoes.

That's pretty urgent, there are people who believe in Brexit, "he said.

" Boris [Johnson] believes that Jacob Rees Mogg believes in it.

Good Morning Britain appears on ITV at 6 am on weekdays