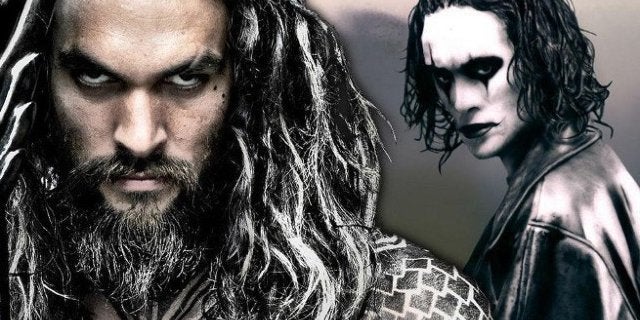 Sony's remake of The Crow hit a big stumbling block today when star Jason Momoa and director Corin Hardy were both announced fall out of the project. Well, Momoa has expressed his disappointment in the social media that he was unable to play The Crow – but he has come up with some new concept drawings that give the imagination of the fans what might be The Instagram image teases Momoa in Crow's face make-up and holds a piece of concept art that shows what he might have looked like in the movie. He shared the picture with the fans, along with the following caption:

"I've waited 8 years to play this dream role, I love you @corinhardy and @sonypictures, unfortunately I have to wait 8, not our team. But I swear I'll do it James O Barr I'm sorry to let you down I will not go to the next one This movie needs to be released And to the fans I'm sorry I can not do anything Love It, I'm Ready When It's Right Love u Corin aloha j "

The reported reason for creative stumbling with The Crow has something to do with it That Sony is unable to complete a deal with Samuel Hadida by Davis Films, which currently holds the rights to film franchise. This is just another great creative trap for The Crow, as director Corin Hardy had actually dropped out of the project three years ago. The movie got another chance, and Momoa's interest lured Hardy back ̵

1; just to give him a second round of disappointment. This disappointment is even worse, considering that this should be Hardy's big directorial debut – as well as another franchise opportunity for Momoa. Speaking of it: It's a bad time for Sony to lose Momoa as the former Game of Thrones plays star for his great DC Films solo movie, as [Aquarian Aquaman comes to the cinemas later this year. If this movie is as successful as the first test material would suggest, then Momoa could only have time to play this comic icon in the end.

We'll keep you up to date on what's happening next The Crow Rebirth .