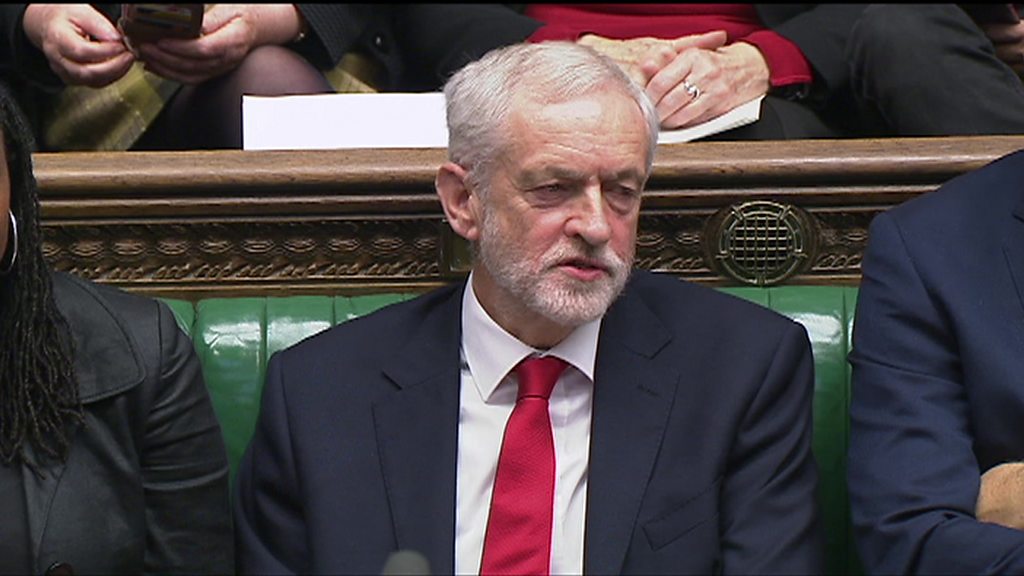 The Labor leader Jeremy Corbyn has refused to call Theresa May a prime minister while asking Prime Minister questions after appeals for apology.

He told MPs he said "stupid people" and "opposed the use of sexist and misogynist language in any form".

Commons spokesman John Bercow said he had done this the alleged incidents were not seen and all MPs had to be taken at their word.

But Tory MPs said they did not believe in Mr. Corbyn and said he had to apologize.

Mr Corbyn told the House of Commons, "During the Question Time of the Prime Minister I spoke today of those whom I believe have a debate about the national crisis that our country is facing as 'stupid people' to one

"Mr. Spokesman, I have not used the words" stupid woman "about the Prime Minister or any other minister, and I am completely opposed to using sexist or misogynist language in any form.

"I am pleased to note this afternoon at your request."

Mr. Bercow was separately accused by Tory's deputy Vicky Ford of calling her a "stupid woman" on an earlier occasion have what was immediately denied by Mr Bercow.

The spokesman said he had said it had been watching television footage of Mr. Corbyn's alleged insult and it was "easy to understand why the opposition leader could be construed as a" stupid woman. "

He had also consulted a "Lips spokesman" who was hired to interpret lip movements in courtrooms and other situations when a lip reader can not get close enough that gave weight to this view, but was not conclusive.

"Nobody can be 100% sure that includes professional lip readers, but of course I will accept that and would speak of any righteous or honorable member."

"It's reasonable to expect that house this does the same.

He added that Mr. Corbyn "sat at the time" and did not turn to the house, "so his words were not" on the record. "

Mr. Corbyn had come across the Brexit deal with the Prime Minister, calling her decision last week to postpone a "deeply cynical maneuver" by a "failed" Prime Minister.

Ms. May repulsed Mr. Corbyn, saying that he had not submitted his promised motion of censure and had then submitted one that was ineffective.

"I know it's the … pantomime season," she told the MP, "will he give a vote of confidence, oh yes, that's him," she said, and asked the Tories MPs to sing afterward, " Oh no, he is not. "

Continuing the pantomime theme, she told the leader of the Labor Party: "Look behind them – they are not impressed and neither is the country."

You can see that Mr. Corbyn answers in response to something under his breath.

Asked about what he allegedly said about Tony's deputy Paul Scully, Ms. May said, "I think everyone in this House should encourage women, especially on the 100th anniversary of the women's election to engage in politics and use a suitable language. "

The former Minister, Sir Patrick McLoughlin, charged Mr Corbyn with an application that he mumbled that Theresa May was a" stupid woman. "

Man heard screams of "shame" and "disgrace" Tory Banke at this point.

Sir Patrick added: "is not appropriate for him to return to this chamber? Excuse me?"

The dispute continued after the Prime Minister's questions. A number of Conservative MPs who agreed to an apology.

Commons boss Andrea Leadsom addressed the speaker himself and reminded Mr Bercow that he had not done so. I apologize to her for calling her a "stupid woman" during an incident earlier this year.

Mr Bercow said he had already dealt with this matter.

Former minister Anna Soubry suggested that Bercow be more inclined to act The words were voiced by a conservative front-line member of a Labor MP.

Lib MP MP Vera Hobhouse said, "Sexism in any workplace is unacceptable Jeremy Corbyn has left the 1980s behind.

" Young women from all over the country will have witnessed this exchange today, and it is no surprise that many of them are discouraging participation in politics. If the allegations are true, Jeremy Corbyn must apologize. "