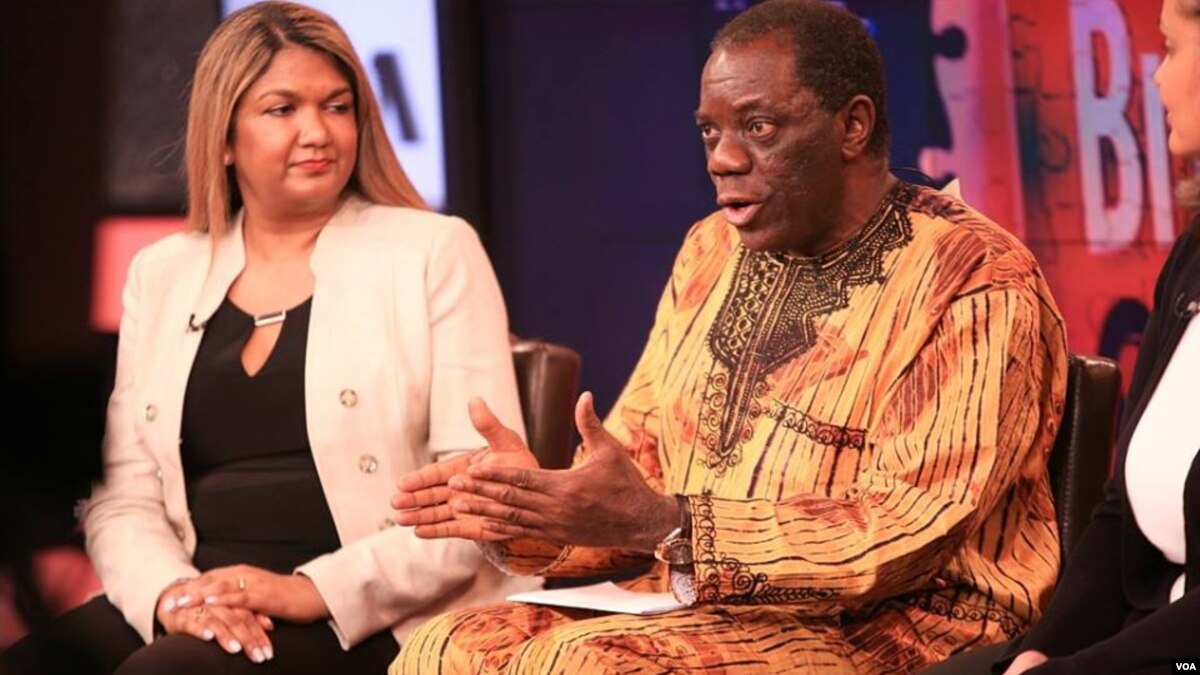 The 4-year-old Cote d'Ivoire boy could not walk, talk or feed himself. He was so different from most other children that his grandparents were reluctant to accept him. The slightly older Kenyan boy was so restless that his primary school teachers beat him until they realized he was a star pupil.

The two children reveal different faces of autism – and how society sometimes reacts to this condition.

Videos of the boys appear in "Autism: Breaking the Silence," a special edition of VOA's Weekly Program Straight Talk Africa . It was recorded on Wednesday in front of a small studio audience by people who live with the situation or deal with it professionally.

About 45 minutes after the program, Benie Blandine Yao from Ivory Coast holds her 4-year-old son, who has autism.

The program aims to demystify and deepen the understanding of autism spectrum disorders. It affects the normal development of the brain and often interferes with an individual's ability to communicate, interact socially, or control behavior. The condition can range from easy to difficult.

Worldwide, one in 160 children has an Autism Spectrum Disorder, reports the World Health Organization. In low- and middle-income countries, autism rates are more difficult to determine, including in sub-Saharan Africa with limited access to clinicians.

Everywhere, "poor people are diagnosed later," Scott Badesch, president of the Autism Society of America, said in a video review that sets the stage for discussion. "… There are more services today than ever before, but there is nowhere near the services needed for those who need help."

Stigma and superstition can increase the challenges.

Parts of Africa, young people with autism "are called devils, and they are not diagnosed and are not treated," the audience commented on Sierra Leone-born Bernadette Kamara, who runs the BK Behavioral Health Center in suburban Washington ,

Some people believe that the disorder is punishment for a parent's bad behavior or suffering that can be prayed, said Mary Amoah, who was shown with 15-year-old daughter Renata in a related VOA video.

"You do not understand that this is a purely medical condition, it can happen to anyone, regardless of your background," said Amoah, coordinator of a treatment center in Accra, Ghana, for disabled children. "In our part of the world, much needs to be done in terms of education, acceptance and understanding."

Researchers have not identified the exact cause of autism, although they cite genetic and environmental factors.

Panelist Susan Daniels, who directs the Autism Research Coordination Office for the National Institute of Mental Health, part of the US National Institutes of Health, emphasized that the research supported by NIH and CDC is not linked to vaccines In childhood,

even though the state does not have a cure, early intervention shows the quality of life of people with motorism and their family improvers.

"If you have a baby that is 12 years old [months] that can not babble, that's a signal," he said. Another reason is the inability to detect objects, a sign of low muscle tone in autism.

Other hallmarks include lack of eye contact or sensitivity to noise, said Daniels. She added that a definitive diagnosis "can not be done properly until the age of two, but most children will not be diagnosed by then."

"Children with autism in Africa are diagnosed on average about four years later at the age of about eight years, as their American counterparts report," the Spectrum Autism Research News website reported in December.

Some of these indicators could mislead in assessing African children, said panelist Morenike Giwa Onaiwu, a Texas-based member of the Autism Women's Network. [19659002] "In many African cultures, it is not common to make direct eye contact, it is not a red flag," said Onaiwu, whose parents came from Nigeria and learned that she was autistic only if two of her own six children were positive identified with autism. "Speaking of not babbling, we speak when we have something to say … Certain things can be overlooked culturally because diagnostic criteria are considered by Western standards."

If they can somehow express themselves, they are geniuses indeed, "said panelist Tracy Freeman, a Washington physician with an autistic child. "Their challenge is neurodiversity and getting people to recognize their intelligence."

the long and winding road