No glitter for Pokot Gold: The Standard 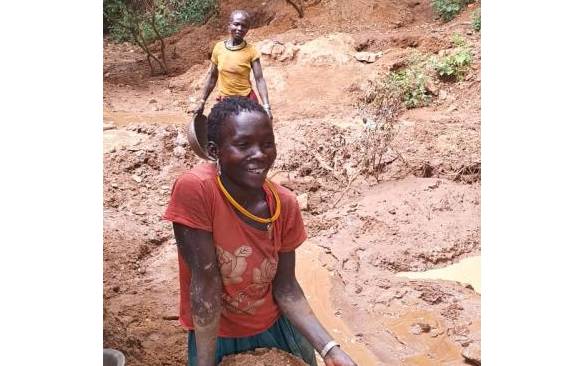 At dawn, miners in West Pokot are preparing for another agonizing day on the Muruny River as they search for precious gold particles along the river beds. The women with their children on their backs run for miles under the scorching sun to reach the gold spots. Those who are lucky today will sell the minerals for a kilo of corn. Unlike other parts of Kenya, most of the miners here are women who are traditionally responsible for ensuring that the family is well fed. The men according to the Pokot culture take care of the cattle. 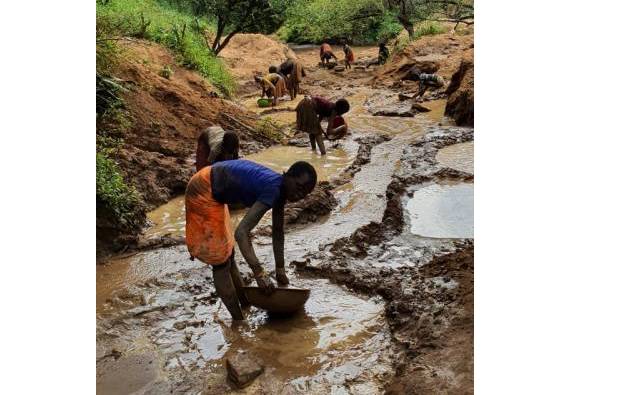 For young members of the community, girls accompany their mothers to find gold, while the boys help their fathers graze cattle.

In Lokitonyala, The standard met a number of women with metal basins and someone as they head towards the gold mines. While they are at the river beds, they sort sand and rocks with ease. If you watch from above, you see dozens of girls pouring water into the pools in search of gold. Thirteen-year-old Cheptoo Lotudo, who survived after being buried in a mining pit with her friends, said she started looking for gold when she was eight. “We come here very early in the morning and work all day. When we leave this place my joints hurt and I am exhausted. Two weeks ago my classmates and I had a mining accident, luckily we survived. My friend was unlucky, ”said Cheptoo. “When I get gold stains, my family is very happy and I don̵

7;t work for a few days. We also eat Ugali at home, which makes me happy. ”

The children here are exposed to one of the worst forms of child labor, but local authorities are doing little to address the situation. “We know children shouldn’t work, but when we don’t work, our grandparents don’t eat,” said Louma Lomungelima, a fourth grade student. Louma is also a survivor after being buried in the pit with her two friends. Because the corona virus interferes with learning, some school children spend most of their days in the pits and on the Muruny River looking for gold. Unfortunately, her parents and legal guardians agree to their work. Mary Merereng, 36, said that since they are the main providers, they have to work hard and look after their families.

“We are the only breadwinners, we have to mine gold to even feed our men,” she said. Merereng, a mother of five, said most men in the area don’t indulge in gold mining. When she gets her Sh600 after selling gold, she has to budget for the whole family.

Florence Natapar, another miner, said the market for gold was bad and the brokers took advantage of it by selling a gram at a throwaway price. “We wake up in the morning and go to the box to look for gold. Sometimes our children are buried in the box. We need better prices for gold. The rain favors our gold exploration activities because the ground is soft and the water helps us seeing the gold clearly, “she said. However, Lokitonyola district manager Peter Lokoirereng warns of the negative effects of mining on women and children. “Children are looking for gold in the Nasal, Kalimukwares, Narorwo, Koumoyi, and Lokitanyala areas so they can feed themselves,” he said. Recently, three children between the ages of 11 and 13 were buried in the box to raise money to buy ornaments, he added. West Pokot has limited gold deposits along the Muruny River, Seker and parts of Alale, limestone deposits in Sebit, Ortum, Muino and parts of Alale. However, the deposits were not used commercially. Apollo Okello, West Pokot County’s representative, says it is illegal for minors to mine and has warned parents who allow their children to go into the mines. “Parents should protect children from child labor. We will arrest and prosecute parents,” he said.

Akorino believers pray for Uhuru while the DP cancels