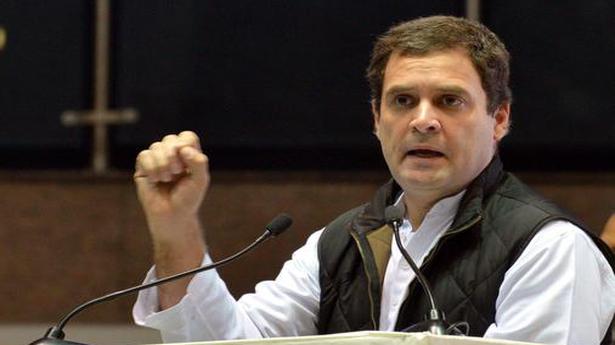 Congressional President Rahul Gandhi expressed concern about the flood situation in Kerala on Thursday and turned to Twitter to ask people for help by contributing to the Prime Minister's relief fund.

He also marked the boss's affiliation The minister's aid fund for his tweet asked people to contribute and said, "It's time to get up and help."

"I am deeply concerned for the people of #Kerala tonight when the tide is rising, thousands are stranded, auxiliary camps full, many have lost loved ones, it is time to get up and help, please make a generous contribution to the CM's relief fund, "he said on Twitter to mark the connection.

I am deeply concerned for the people of #Kerala tonight, when the flood is rising. Thousands are stranded. Auxiliary storage full. Many have lost their loved ones. It's time to get up and help. Please make a generous contribution to the relief fund of the CM. Use this link: https://t.co/GNUlGQbBZv pic.twitter.com/Gm5QGifSms

The death toll in The Present Phase of monsoon rage in the southern state has touched 72.

Rise in flood in Periyar River due to rain and opening of all shutters of all major dams including Mullaperiyar, Cheruthoni, part of Idukki Reservoir, and Idamalayar,

Prime Minister Kerala, Pinarayi Vijayan, has called again Prime Minister Narendra Modi and him aware of the flood situation in the state.

The state has also used the services of an additional army According to Mr. Vijayan, the Prime Minister has pledged all his help. Kochi subway stopped operating this morning after floodwaters had invaded the Muttom yard at Aluva, many passenger trains and partial cancellation of some long-distance trains.

According to the think tank, China is building more secret detention centers in Xinjiang