Breaking News
Home / Technology / KLM's Flying V aircraft is more about the present than about the future.

KLM's Flying V aircraft is more about the present than about the future. 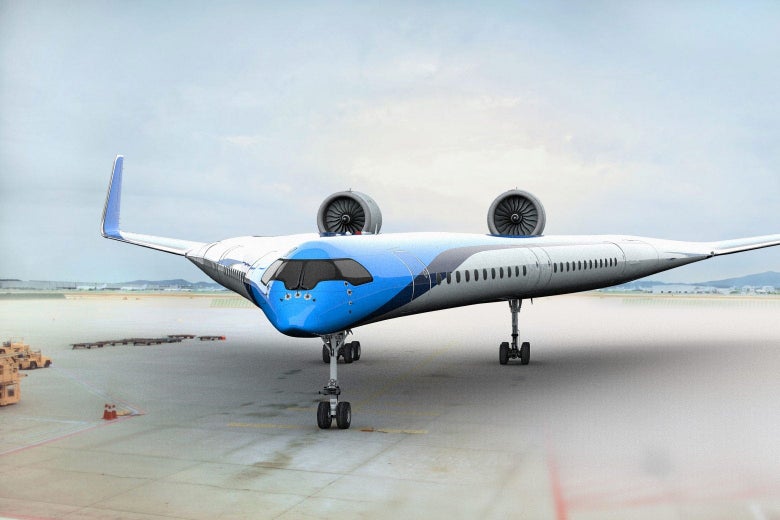 After a hard year in aviation – laying the cornerstone of the Boeing 737 MAX after two deadly crashes, the crash of US airline computer systems and the announcement of the end of the Superjumbo Airbus A380 – we needed some good news on the commercial Use flight. It arrived in the form of a revolutionary future airliner.

In early June, CNN skipped the story of an innovative aircraft design called Flying-V, funded by the Amsterdam-based company KLM. This is an airliner with an exciting new shape, which is summarized by the letter of the same name. According to previous reports, the Flying-V will match the capacity of current widebody jets like the Airbus A350 and the Boeing 787, but there is a twist. Two corridors run over two separate hulls, which make up the wings themselves. (This means that half of the window seats look out onto double-glazed window seats above a touch of air.)

The idea of ​​a V-shaped aircraft is not exactly new, but KLM has shown renewed interest in making this geometry the avant-garde in commercial flight. In particular, the Flying-V promises a higher fuel efficiency by using "synergy effects" between the wings and the body of the aircraft.
The Boeing Boing and Travel + Leisure outlets to Maxim followed this story by citing CNN copies and recycling, demanding impressive illustration of the concept plane – as if it were already connected to a jet bridge and ready for passengers. Ready to fly.

But the Flying-V has something strange. All this buzz about a futuristic plane really has everything to do with the Anthropocene – our current turning point in geological history, a twist defined by destructive human influences.

The stories of the Flying-V were consistently framed around the desire for sustainability of commercial flight. Each article highlighted how the new aircraft promises up to 20 percent greater fuel efficiency, and several have noted the current global excess of carbon dioxide emissions to celebrate the new design. The subtext of all these reports is that air travel as we know it affects the environment. This is shown by the disruption of migratory bird migration and runway runoff, carbon emissions in the atmosphere and the insatiable consumption of fossil fuels. However, news on the front page about the Flying-V admits that air travel is excessively wasteful and reaches a crisis point. And yet in these stories the commercial flight is taken for granted to continue unabated.

The coverage in the media about the Flying-V is fixed on an alternative present even if it is a sustainable future in 20 to 30 years , "The whole hype really focuses on how we feel at the moment with commercial flight – and the environment. Jumping into the future for several decades as if it were basically the same is a sign of bad faith: as if you admit that no progress is made at all and we continue to play with our fate. The story of this imaginary plane is also about our inability to conceive of the Anthropocene as a real problem that we could engage with in the near future, through more pragmatic steps and in a less extravagant way. It's not just about a quick technical solution or an easy adaptation to an existing situation. Rather, the Anthropocene requires that humans respond radically on a large scale by reorienting themselves, how our species understands itself and interacts with the planet and its myriad of other inhabitants.

Media coverage of the Flying-V is fixed on an alternative .

Given today's realities of airliners – the stubborn rivalry of the two workhorses, the Airbus A320 and the Airbus Boeing 737; the tremor of the still grounded 737 MAX (not coincidentally also sold with the promise of higher fuel efficiency); the end of jumbo jets – we have reason to be seriously skeptical, which would significantly change the shape of airliners. Commercial air travel, as we know it, is too deep-rooted and evolves into a mere monotype: twin-engine, small-to-medium size airplanes geared to global productivity. Costs and retraining are essential for any serious redesign of air traffic.

And speaking of the costs: Flying-V-News's fine print declares that this is not a "new plane" at all – at least not yet – but a particular large company (KLM), research and design funded the idea of a new aircraft. Finance is the key, and why some environmental thinkers prefer the name Capital Centenary for our current epoch: It refers to the imagination of enormous amounts of capital accumulated by multinational conglomerates or powerful sole proprietors capital, which could then be channeled in the right way as if it magically and precisely solved the problems of modernity.

Of course, capital does not function as if it could jump into the future or snap its fingers and do something at once (build a wall, invent a new plane, provide Wi-Fi for everyone, go) Mars). No, capital is spreading, but it is unevenly distributed. it benefits many people, while it only increases a few. Capital builds on itself, but without pursuing another goal. Capital does not care about sustainability, but collects as long as it can. In other words, while air traffic is about real origins and goals, capital does not have to go anywhere to develop. Maybe it does not need a world.

Finally we have to talk about the name: Flying-V . A reference to the Gibson "Flying V" electric guitar, it makes the whole company like glamorous entertainment. The name evokes Lenny Kravitz or maybe Eddie Van Halen on an epic show in the past. As if all this was just a flashy rock concert, a mass spectacle we could wake up tomorrow morning when we stop and say what a great time it was. And in a sense, it was.

As a short quasi-message that circulated online for a day or two, the Flying V story is otherwise part of the Anthropocene. It is evidence of the strangely timeless drift of the Internet, the slow yet relentless expansion of circuits and devices, knots and wires, screens and buttons, satellites and cell towers: the entire infrastructure and the entire apparatus that drives us to and from this place At the same time, confronting the horror of a horizon past that outdoes all these things, the Internet brings a fading reminder of a past of seeming abundance. Where we cataloged all our hopes and fears, even keeping our planes of the future, airplanes that showed that we had learned and adapted our behavior to live more sensitively in the world. It turned out, however, that we only accelerated the end of the world by insisting that it all remain the same – even though we thought we were planning a better future way to fly, to live.

future tense
is a partnership of
Slate,
New America and
University of Arizona
This examines new technologies, public order and society.