Like film editors and archaeologists, biochemists put genome history together 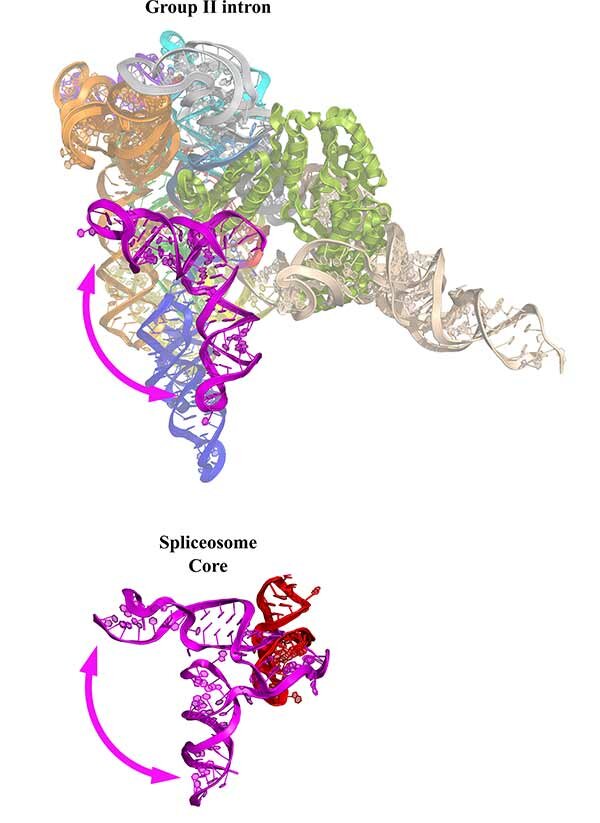 Hollywood editors of the old school cut unwanted movie images and patched into the images they wanted to make a movie. The human body does something similar – trillions of times per second – through a biochemical process known as RNA splicing. Instead of cutting films, the messenger RNA is processed, which is the blueprint for the production of the many proteins found in cells.

Biochemists Navtej Toor and Daniel Haack of the University of San Diego have combined two-dimensional (2-D) images of single molecules in their study of the evolutionary origins and history of RNA splicing and the human genome to produce a three-dimensional (3 -D) Picture of part of the RNA – what the scientists call introns of group II. They discovered a large-scale molecular movement associated with RNA catalysis that demonstrates the origin of RNA splicing and its role in the diversity of life on Earth. Her seminal research is outlined in the current issue of Cell .

"We try to understand how the human genome has evolved from primitive ancestors, and every human gene has unwanted frames that are noncoding and must be removed prior to gene expression, which is the process of RNA splicing," Toor, Associate Professor at the Department of Chemistry and Biochemistry, said, adding that 15 percent of human diseases are due to defects in this process.

Toor explained that his team is working to understand the evolutionary origins of 70 percent of human DNA – a part that consists of two types of genetic elements that are believed to have originated from Group II introns. In particular, spliceosomal introns, which make up about 25 percent of the human genome, are non-coding sequences that must be removed prior to gene expression. The remaining 45 percent are composed of sequences derived from so-called retroelements. These are genetic elements that integrate into the DNA and multiply via an RNA intermediate in the genome.

"The study of introns of group II gives us an insight into the development of a large part of the human genome," Toor noted. 19659005] In collaboration with the Group II intron RNA nanomachine, Toor and Haack, a postdoctoral fellow at UC San Diego and lead author of the work, were able to isolate the Group II intron complexes from a high-living blue-green species temperature.

"The use of a Group II intron from a high temperature organism facilitated the structure determination due to the innate stability of the complex of these species," Haack said. "The development of this type of RNA splicing has probably led to a diversification of life on Earth."

Haack further stated that he and Toor discovered that the group II intron and spliceosome share a common dynamic mechanism for the movement of their catalytic components during splicing RNA splicing.

"This is the strongest evidence yet that the spliceosome has evolved from a bacterial Group II intron," he said.

In addition, the results show how group II introns can insert into the DNA via a process called retrotransposition. This copy-and-paste process has led to an increase in selfish retrograde elements in human DNA, which make up a large part of the genome, and have been involved in speciation of primates, "Toor noted.

The researchers used Cryo-EM microscopy (Cryo-EM) to extract a molecular structure of the Group II intron, which freezes the RNA in a thin layer of ice and then shoots electrons through it, according to scientists, the electron microscope can magnify the image 39,000 times The resulting 2-D images of individual molecules were then assembled into a 3-D view of the intron of group II.

"This is like molecular archeology," Haack said. "Introns of group II are living fossils that give an insight into the origin of the complex life on earth. "