Lionel Messi 6/10, Marcos Rojo 4/10 as Argentina in front of France 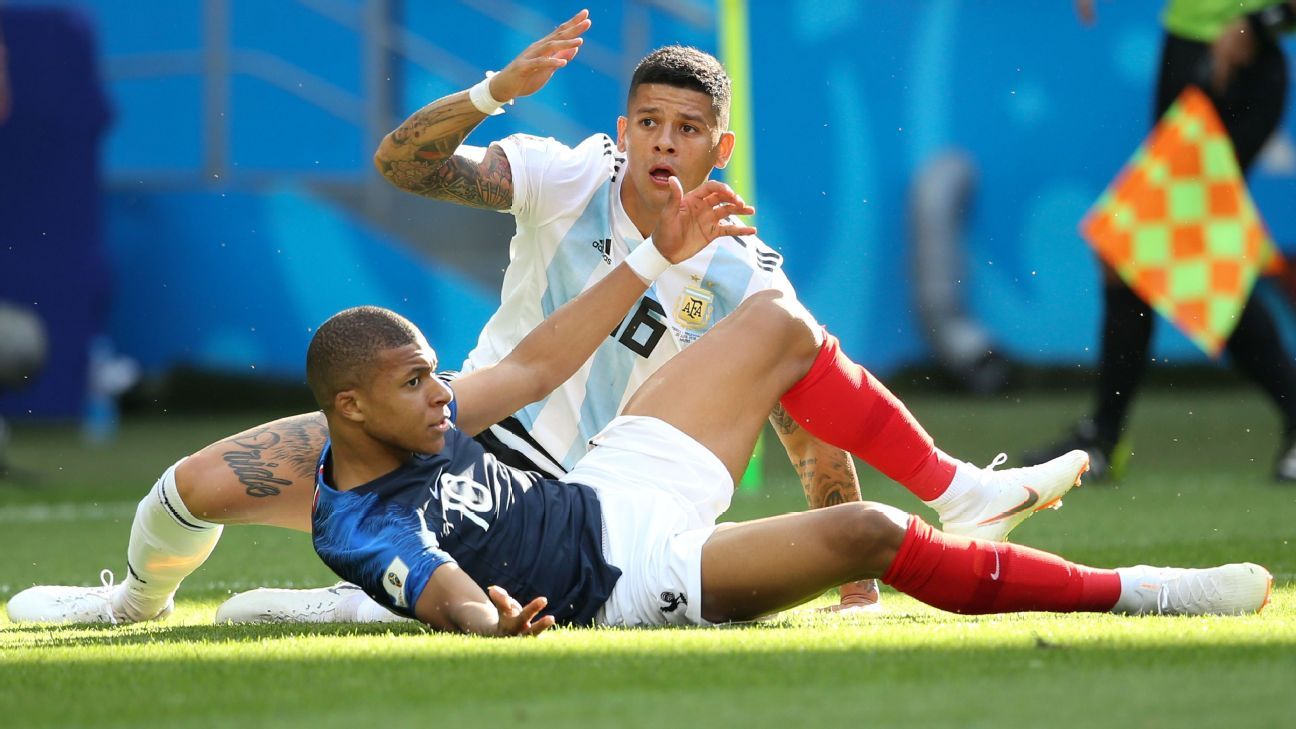 Argentina left the World Cup in an exciting start to the knockout stages in Kazan, in a game in which both defenses looked vulnerable, but only Argentina seriously tested. For one of the oldest squads in Russia in 2018, a rebuilding project is certainly not far off, and another disappointing idea of ​​the runner-up in 201

4 underlines the extent of the task at hand.

A chaotic tactical setup, the Jorge Sampaolis ability to lead Argentina to the next World Cup, a total absence of a defense or midfield and a sinking sense of having this Seriously questioning a player from Lionel Messi's caliber, Argentina will find it hard to move on from here.

3 – It hardly seems believable Sampaoli could acknowledge the changes that had brought Nigeria's improvements and victory and then change things again, but he did: Lionel Messi himself in front; two winger, with no one to cross, and Ever Banega too high up on the court to find the range of passing he needed to light up. It was a bizarre line-up, and his changes did not weaken the game – Sergio Aguero set aside – and that only underscored the stupidity of the start without a center-forward.

It should be clear that some of the following player ratings are much more a reflection of the manager's tactics than the player himself.

GK Franco Armani, 5 – – Not much he could do for the penalty, but he looked flat-footed for Benjamin Pavard's goal and let Kylian Mbeppe's first wind his way under his body as he really did should have been better.

DF Gabriel Mercado, 4 – In the first half, he battled the counter and collapsed with midfielders and defenders.

DF Nicolas Otamendi, 4 – Otamendi was on course for a 5 here to be just the worst of the Argentine defenders, until his stupid booking and time-wasting argument in stoppage time when his team needed all seconds, to achieve a balance.

DF Marcos Rojo, 4 – Well against Nigeria, but far less impressive here – in the first half France had three dangerous counterattacks, and two of them were directed directly against Rojo, who did not react. Did the penalty kick out and was substituted at halftime

DF Nicolas Tagliafico, 5 – As in other games in this tournament, it's hard to say that Tagliafico did a great deal wrong (compared to his team-mates). but also hard to figure out what he did right, except for one or two timely interventions.

MF Enzo Perez, 5 – Part of a midfield that was overrun even before it was taken away to make room for Agüero. The system left him confused about what he should do, and he never found the fit that he had against Croatia (in the first half) and Nigeria.

MF Javier Mascherano, 4 – Not everyone agreed that he had a bad game against Nigeria; surely nobody will agree now. And it is not completely Mascherano is to blame – in midfield he remained against a quick counter-offensive alone in the game, which evoked memories of Diego Maradona led exit from the 2010 World Cup against Germany. Confirmed his international retirement after the game. If he had done that six months or a year ago, Argentina might have been able to build something stronger here.

MF Ever Banega, 6 – Again, he was not entirely to blame for the formation demanded that he play higher the place than in his playing display against Nigeria, and as a result Banega did not find his pass range until the introduction of Sergio Aguero allowed him to fall deeper – and then tentatively.

FW Cristian Pavon, 6 – A winger without a center forward can only achieve so much. And Pavon did what he probably did in the team given his role and skills. That's why he gets the "start note" of 6.

FW Angel Di Maria, 7 – A nice strike to equalize Argentina and a brilliant second-half start was all that Di Maria needed the claim to be the best player in Argentina. And given his performance in recent years, when Di Maria Argentina's best player, it is clear that something went wrong.

FW Lionel Messi, 6 – Messi played directly to the right of a center-back against Nigeria … so Sampaoli called him a false 9th. Without a central attack partner, Messi was again expected to be both creator and finisher but he can not pass the ball on to himself. His fond support for Aguero's late goal of giving hope to Argentina was a frustrating look at what might have been if the system was different from the start.

DF Federico Fazio, 3- Half-time to provide more solidity than Rojo had in the first half, and managed the impressive trick of being the Argentine defender in the field despite the tough competition.

FW Sergio Agüero, 7 – Came on, led the line, got into good positions behind the French defense, and took his aim well to read messi's passing intentions. His introduction could have been considered a feat of substitution had it not been so painfully obvious that he (or Gonzalo Higuain) had started the game.

FW Maxi Meza, N / R – Too late for a review and again had a quiet, ineffective game.