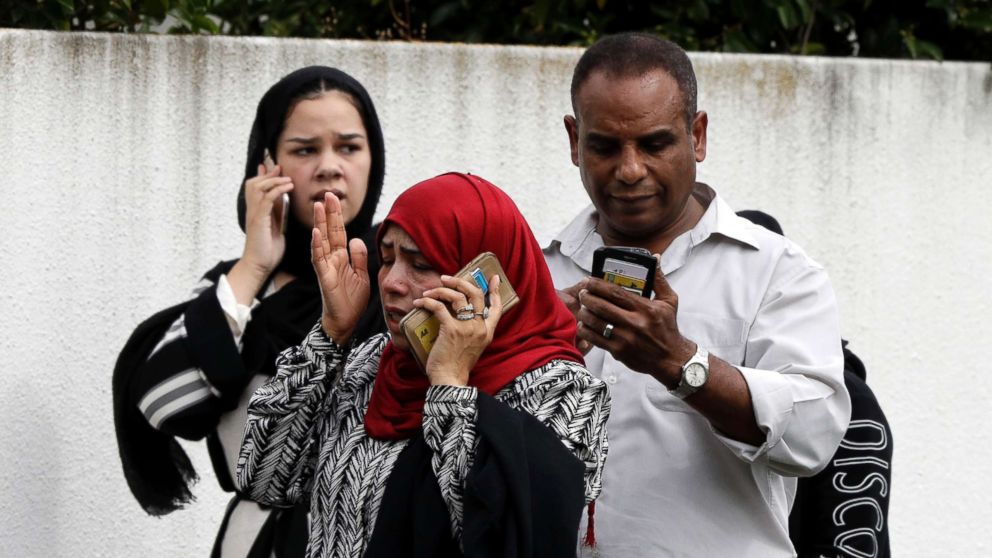 At a mass shooting in Christchurch, New Zealand, at least 49 people were killed and dozens injured on Friday when an armed man opened fire in two mosques.

Add New Zealand as an interest to stay up to date on the latest news, videos and analysis in New Zealand.

The shootings were classified as a terrorist attack.

"It's something we never expected to happen here," Christchurch MP Gerry Brownlee told Good Morning America. "We are a relatively small population, and although we are very different ethnically, we live a very peaceful life and that, as many have seen, has destroyed our innocence."

Brownlee, who said he lives not far from any of the shooting ranges, said, "Almost everyone knows someone or has a connection with the families of someone who was either killed today or seriously injured."

"This is one of New Zealand's darkest days," New Zealand Prime Minister Jacinda Ardern told a news conference on Friday.

The armed man, who was tactically dressed, appeared to see a livestream video from the shoot in social media, according to the New Zealand police. He documented his trip from his car and to the worship center in central Christchurch, where he indiscriminately opened the fire, police said.

Officials said they were working to remove "extremely incriminating material" taken at the scene, and urged social media users not to share it.

Three people are in custody, including an Australian citizen. A man was charged with murder and is scheduled to appear in court on Saturday, police said.

The shooter also opened fire outside the mosques. The police said they had found two improvised explosive devices on nearby vehicles that had been taken to safety.

Witnesses said the attack occurred just before 1:40 pm. Local time when the sheikh preached in Christchurch, which has about 375,000 inhabitants.

"The gun is starting to shoot, and he just came in and shot ad hoc," Ramzan Ali told The Associated Press.

Arden referred to the nationalities of the victims and said, "Many of those directly involved could be immigrants, refugees who have decided to be here, they are us, the person who did this is not."

Ali said he survived by hiding under a bench.

"I did not see him because I just lied under the bench and thought if I came out, I'll get shot," he said. "I'm just keeping my fingers crossed for being alive."

He added, "I was the last man to come out of the mosque after shooting and many corpses were on the doors."

Len Peneh, who lives next to one of the mosques, told the AP that he had "seen dead people everywhere" as he went in to help.

"I lived next to this mosque for about five years and the people are great, they are very friendly," he said. "I just do not understand."

Brownlee praised the police for acting quickly and said that the most important thing now is to support people who have ties to victims.

Of the 49 police officers killed, the New Zealand Police said that 41 victims were in the Deans Avenue Mosque, seven in the Linwood Avenue Mosque and one in a hospital died.

"New Zealand is a place where people feel very safe and free," he added, "and this has certainly shaken that faith today, and we need to make sure that we do not end up with a permanent loss of life Freedom we value so much. "

Ardern said none of the suspects are on an active terrorist watch list and "it's not about anyone slipping under the radar."

Morrison said the shootings were carried out by an "extremist, right-wing, violent terrorist who had taken his life – stolen life – in a vicious, murderous attack that claimed so many New Zealanders."

Queen Elizabeth said in a statement that she was "deeply saddened by the horrific events in Christchurch".

"Prince Philip and I send our condolences to the families and friends of those who have lost their lives, and I also pay tribute to the emergency services and volunteers who support the injured," she said. "In this tragic time, my thoughts and prayers are with all New Zealanders."

President Donald Trump tweeted on Friday, "My sincere condolences and best wishes are addressed to the people of New Zealand after the terrible massacre in the mosques, 49 innocent people have died so futile, with so many more serious New Zealand injuries for everything we can do, God bless everything! "

My warmest sympathy and best wishes go to the people of New Zealand after the terrible massacre in the mosques. 49 innocent people have died so senselessly, and many more have been seriously injured. The US is in New Zealand for everything we can do. God bless everyone!

"Our thoughts and prayers are with the victims and their families," reads the statement. "We stand in solidarity with the people of New Zealand and their government against this vicious act of hate."

ABC News & # 39; Matt Foster, Will Gretsky and Darren Reynolds contributed to this report.