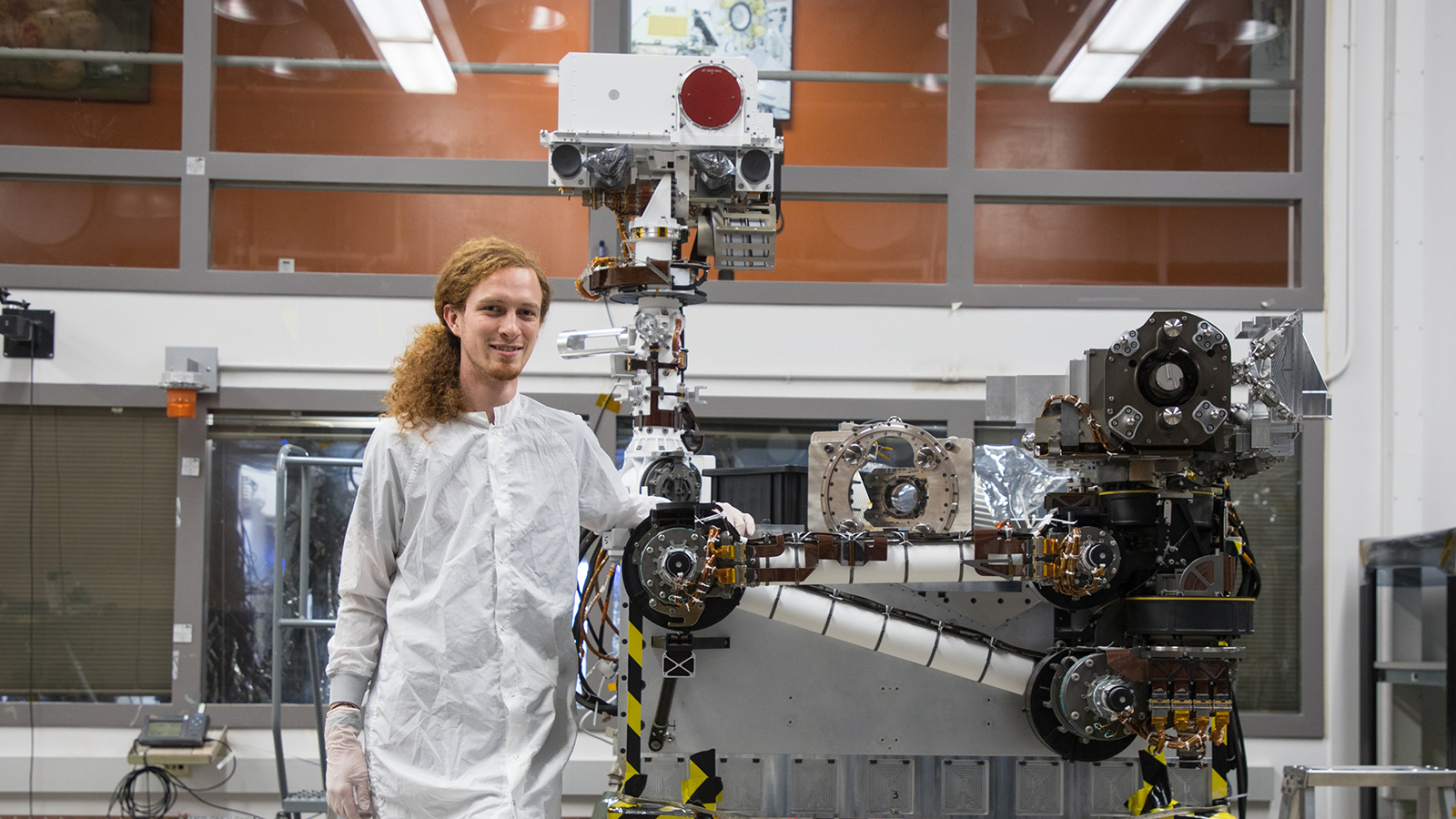 It may look like a cartoon, but the face of NASA's next Mars rover is serious business for Jeff Carlson. A former intern at NASA's Jet Propulsion Laboratory, Carlson is now part of the JPL team tasked with assembling and testing the "head" and "neck" (officially called the Remote Sensing Mast) for the Mars 2020 rover. IKEA furniture – that is, if the furniture were going to another planet with no option to return for spare parts. The mast wants to play a key role in the mission's goal of finding evidence for ancient microbial life. Returning JPL internally Posted by admin at 7:28 AM Email This BlogThis! Share to Twitter Share to Facebook

I am working as a mechanical engineer on the remote sensing mast for Mars 2020, [NASA̵

7;s next Mars rover]. The remote sensing mast is the "neck" and the "head" of the rover. Scientifically, it is our vision system for looking far and doing remote detecting. 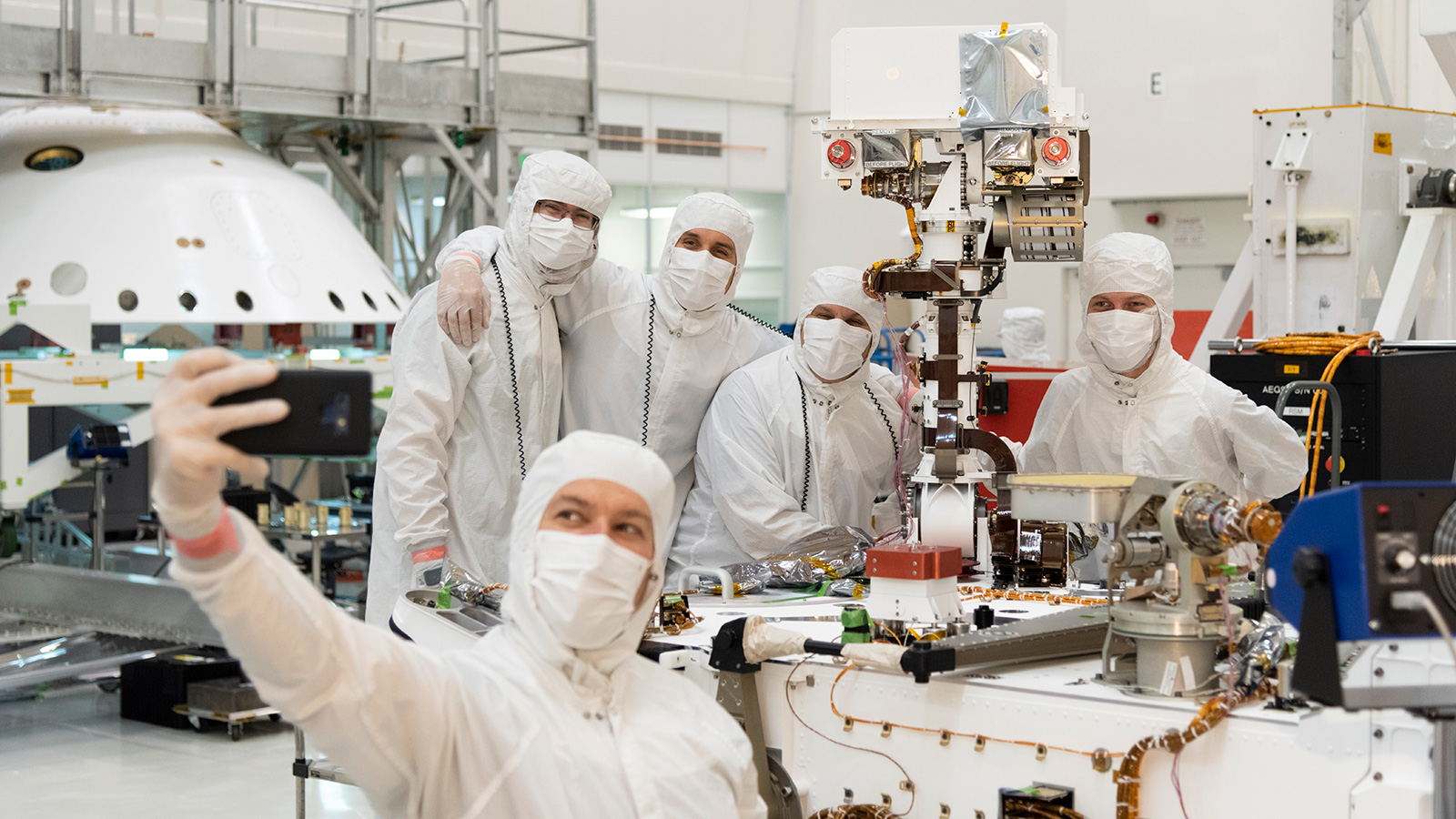 The mast has lots of instruments on it. On the head, itself, there are five cameras. Two of them are for navigation, [NavCams]. They want to guide the rover past obstacles, for example. Then, there are two Mastcam Zs. On the Curiosity rover, they are called Mastcams. On Mars 2020, they're called Mastcam Zs, because they have zoom lenses on them. Those cameras want to take pictures from the panorama. Then, we've got SuperCam, which is the big "eyeball." SuperCam shoots a laser that incinerates, or ablates, a far-off target. During that ablation, the camera takes a very quick picture. The color of the flash makes the laser make on the target. SuperCam has a microphone on it, which is new for this mission. It will allow us to hear the wind and the movements of gravel and rocks. And then down on the neck of the remote sensing mast, we've got two wind sensors, 90 degrees apart from each other. One of them is a deployable boom, which can reach out to the neck and give measurements of wind direction and velocity. There are also three air temperature sensors, a humidity sensor and a thermal IR sensor. Together, those making up an instrument suite known as MEDA.

A lot of my time has been devoted to the role of Cognizant Engineer, which I share with one other person. That's essentially the engineer who's responsible for delivering the hardware to the spacecraft. That includes everything from making sure you have all the nuts and bolts for the assembly – as well as writing the procedures to build everything. IKEA furniture that shows how to put the pieces together. Our team is pretty small, so usually, once we've developed these procedures, we go into the cleanroom lab, take the parts and put them all together. On a typical day, I usually do a little bit of all that.

NASA's Lake next will literally come together inside a clean room at the Jet Propulsion Laboratory. Credit: NASA / JPL-Caltech | Watch on YouTube

You first came to JPL as an internal in summer 2015.

When I was interned, I was working on a project that I had no idea until I became an intern , and now I can not stop thinking about it. It's called Starshade, and it's a sunflower-shaped device the size of a baseball diamond. It's designed to fly out of the sky and suppress the light from a distant star. Using the same kind of spectroscopy that's in the SuperCam on Mars 2020, scientists can characterize which elements are in the atmospheres of these planets, called exoplanets. If you could do that, it would be groundbreaking because it could tell us if it was a distant planet.

The starshade was made up of two systems , and i was working on both. There's a deployable truss, which is a large hoop that forms the circumference of the giant sunflower shape. That has to be in a rocket to go up to space. So we need to figure out how to fit something that can expand out to the size of a baseball diamond into a four-meter-diameter cylinder. I was working on building and designing that truss structure. The other part is making the sunflower shape so that it suppresses the starlight, and that is in the realm of origami.

What brought you to JPL for your internship?

The first time I heard about JPL Curiosity rover mission team visited my campus at the University of Colorado Boulder.

Seeing the [“7 Minutes of Terror”] video for the first time and hearing how impossible it seems to try to land on SUV-size rover on another planet, I thought, "That's the coolest thing I've ever heard of." I did not even know how to care. I just knew that's where I wanted to be.

What moments or memories from your internship was out?

We were kind of a big intern team. I think there were 13 of us on the Starshade project. There were these days when we would assemble scale models of Starshade. These are huge carbon-fiber structures that are all in one package, and they're squirting out of syringes, and it's very hands-on. So all 13 of us were doing this in a child of assembly line. By the end of the internship, we were able to do better, faster, cleaner and all that. And for me, that was just so fun. I learned a lot about how to work effectively on a team. That's certainly one of the things that makes JPL a special place. No one at JPL would have done it without an amazing team. Jeff Carlson stands in the center of a folded metal structure “/>

Carlson poses for a photograph in the center of the large hoop that forms the circumference of the Starshade design during his summer internship at JPL in 2015. Image courtesy Jeff Carlson | + Expand image

When I first started my internship, I thought that what I wanted to do was mostly CAD, [computer-aided design] work, sitting in front of a computer 3D modeling and making drawings. The internship taught me the joys of tinkering with stuff that might go to space. There are so many things to think about, from launch environments to micro-meteorites to ridiculous temperatures and pressures. It changes the way you think about a problem to be on the side of the formulation, putting the hardware together. I did not even know that was a career option until I started doing it. My JPL internship really opened my eyes to that.

Yes. You did not know the role that existed.

Yes. JPL has a really great idea, it does not matter that you're a student. They want to be listened to with the same openness as the chief engineer had the same idea. Somebody said JPL to me as a meritocracy, and I think more than any other place I've been, that's true. I've seen it myself. Even as a starting full-time engineer, there are times when I think, "Who on I to suggest this? I do not have much experience as all other people. "But I say it because the culture here supports that. And then it affects the way the mission is designed. It changes something important.

Have you had your own internal? If so, what's your mentorship style? Yes, I've had interns of my own. I tried to emulate my mentors from when I was interned. Looking back on it now, I'm making it to the smart enough to make decisions. Coming from school, I think interns have this idea. But for some of the tasks that we've got, the A, B, and C are getting a job done is not all there. Sometimes it's up to the inside to determine the path forward. So I try to give my interns enough freedom to make these kinds of decisions.

What is your advice for those looking to intern or work at JPL one day?

One of the things that makes me happy is my coworkers.

Lastly, I hear you write poetry and draw in your free time. Have your experiences at JPL […]

Being here has opened my eyes to a lot of things. I've started working here, I've got more and more people to share with them. So, JPL encourages creativity. Caltech [which manages JPL for NASA] has an art show every year. I put some pieces in there. I think it's awesome to blend engineering and art. There's a talent show at JPL every year. I sing in the talent show with a little looper pedal. So JPL encourages and confirms, in my mind, that you do not have to be an engineer.

The laboratory's STEM internship and fellowship programs are managed by the JPL Education Office. Extending the NASA Office of STEM Commitment's reach, JPL Education seeks to create the next generation of scientists, scientists, technologists and space explorers by supporting educators and bringing the excitement of NASA's mission and science to learners of all ages.