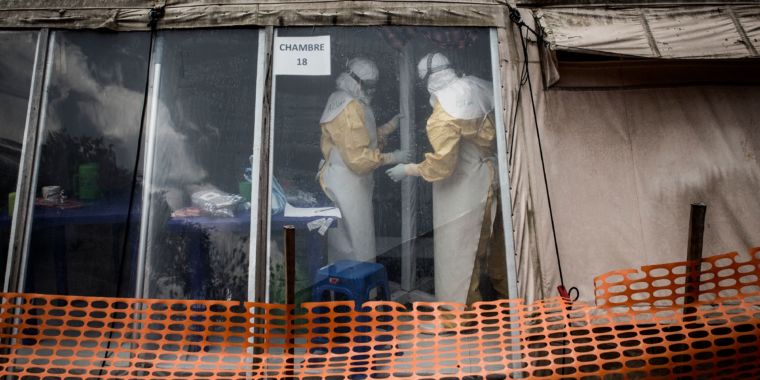 The number of deadly Ebola cases in the Democratic Republic of the Congo reached over 1,000 this weekend as health experts continue to try to prevent the disease in the midst of a violent conflict.

The outbreak has raged since August in the provinces of North Kivu and Ituri, which are located on the eastern side of the country and bordering on South Sudan, Uganda and Rwanda. The World Health Organization (WHO) reported 1,009 cases on Saturday, March 23 (944 confirmed, 65 likely), including 629 deaths (564 confirmed, 65 likely).

The outbreak is the second largest of all times and is only surpassed by the 2014 outbreak of the West Africans, which involved more than 28,000 cases and 11,000 deaths.

Violent attacks and continued mistrust have hampered medical responses during the outbreak. Earlier this month, militants attacked a treatment center in the city of Butembo in northern Kivu, killing a police officer and injuring health workers. MSFs have been receiving medical attention following two more attacks on treatment centers last month. In both attacks, unidentified attackers burned facilities partially down.

"Although the reasons for the attack are unclear and such violence is unacceptable, we know that the actors in the Ebola response – including MSF – have not gained confidence from a significant section of the population," said Meinie Nicolai, General Director of MSF, who is currently in North Kivu, in a statement after one of the attacks.

World Health Organization officials called for renewed efforts to stem the outbreak. "Despite the increasing frequency of attacks by armed groups, WHO is calling for Retain the course and work with communities to end this outbreak in partnership with the Ministry of Health and partners, "said WHO Director-General Dr. Tedros Adhanom Ghebreyesus Saturday," We need more international support and commitment to work together urge to end this outbreak. "

Tedros added that the Fear of community violence and the deadly virus go deep. "Community engagement takes time. There are no quick fixes, "he said.

However, Dr. Matshidiso Moeti, WHO Regional Director for Africa, was very pleased that efforts to date have resulted in 96,000 people being vaccinated against Ebola exceptionally difficult situations, but thanks to the support of donors and the efforts of the Ministry of Health, WHO and partners, we have saved thousands of lives, "he said.