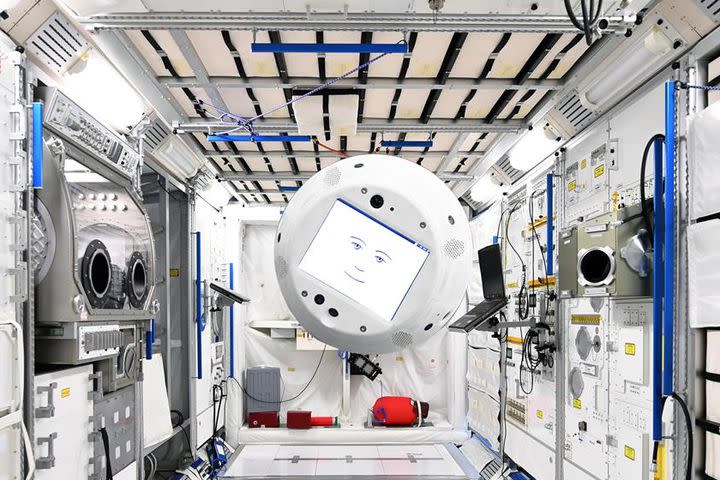 While many of us slept, SpaceX launched tons of supplies to the International Space Station for NASA.

The Crew Interactive Mobile Companion (CIMON) – a new artificial intelligence technology developed by a team of researchers from the European Space Agency NASA and IBM – takes the Dragon capsule from SpaceX.

CIMON has an approximately spherical shape, with a childlike drawing of a face on the screen. It's a bit scary.

The AI ​​Bot is said to float around the space station until an astronaut calls his name. Then CIMON will navigate through the microgravity in the direction of the speaker.

Researchers developed CIMON to assist experimenters by uploading the procedures and guidance videos that are then accessed in support of the experiments can.

When an astronaut asks a specific question, CIMON can answer with the entire knowledge base in the cloud, said researcher Christian Karrasch during a NASA press conference.

The purpose of this kind of tool is to make astronauts in space easier to work with. Time in space is a precious commodity, so having a tool like CIMON can help you with basic tasks more efficiently, especially in long-term use.

The module itself will be The first AI interface of its kind will be launched on July 2nd in space.

And although CIMON is designed to work with anyone, it's been trained to work best with German astronaut Alexander Gerst. He helped to choose the language, accent, and face for the AI ​​tool.

And if you could think about all these possibilities, we could go wrong think of you, Hal 3,000 – Gerst was one step ahead of you.

According to the researchers, the astronaut insisted on making sure that CIMON was off – ensuring that CIMON does not record every conversation on the space station.

The researchers also provided two different operating modes for CIMON. One that only listens when addressed (eg "Hey CIMON"). The other is passive at all times, a feature that could be particularly useful for time-consuming experiments.

Once in the orbiting lab, CIMON will coexist with astronauts for at least the next few months.

The tool is one of 50 experiments sent to the station aboard the kite. Some of the other experiments focus on cancer cell research and crystalline structures.