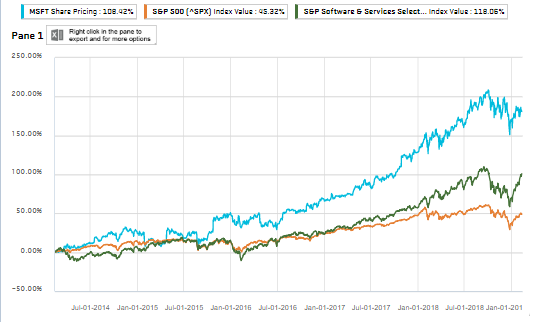 Microsoft (NASDAQ: MSFT) is one of the best known companies in the world. In a perennial race against Apple (NASDAQ: AAPL) and Amazon (NASDAQ: AMZN) for "Most Valuable Company," Microsoft has made a name for itself and innovation over the past 44 years because of its product line and its willingness to grow.

As a company, it has adapted to the broad software and services index, surpassing the S & P 500 by 65% ​​over a five-year period. The industry itself has promising growth opportunities with estimates of 4% in 2019.


With the progressive integration of technology into our daily lives and the increasing competitiveness of large technology, it is important that they take into account the most important factors Drive growth in the industry. Artificial intelligence and the cloud are two major market opportunities as well as strategic alliances inside and outside the industry.

MSFT is highly exposed to each of these three growth factors. The ever-increasing cloud demand will play a big role as Microsoft continues to fight for market share. Artificial intelligence and all its applications in the healthcare and other sectors will be another big growth driver. After all, the company has built partnerships and collaborations between companies as they continue their economies of scale.

MSFT: Creating a Place in Partnership with Industry

MSFT has managed to create a niche in this $ 5T software and services industry. They work in three key business areas: Productivity and Business Processes, Intelligent Cloud and more Personal Computing. Their business environment is quite complex and continues to grow through acquisitions and partnerships. 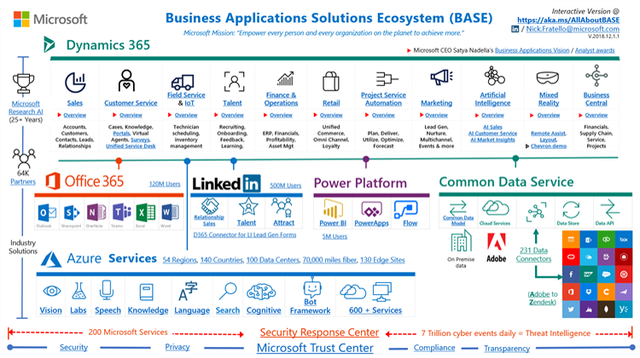 In the last month alone, MSFT has completed several deals to improve its position in the industry. On February 4, they bought the DataSense platform. On January 15, they signed a seven-year digital health care contract with Walgreens. On January 7, it was announced that they were working with Kroger to work on data-driven connected-business deals.

In early December, they worked with MasterCard to work on Digital Identity Management. At the beginning of November, they opened a joint engineering office with Walmart. Eventually, they bought GitHub Inc. with an $ 7.5 billion acquisition in October.

The company is preparing for growth and taking advantage of every opportunity as it comes. Satya Nadella has been a major driver of corporate development in recent years. Since taking office in 2014, the share price has risen by [228%] a greater gain than both Apple and the S & P 500. Overall, the company's leadership is strongly supported by a diversified board of directors that only carries two external directors. They scored the best possible score on three of QualityScore's pillars and achieved good audit, board and shareholder rights results. 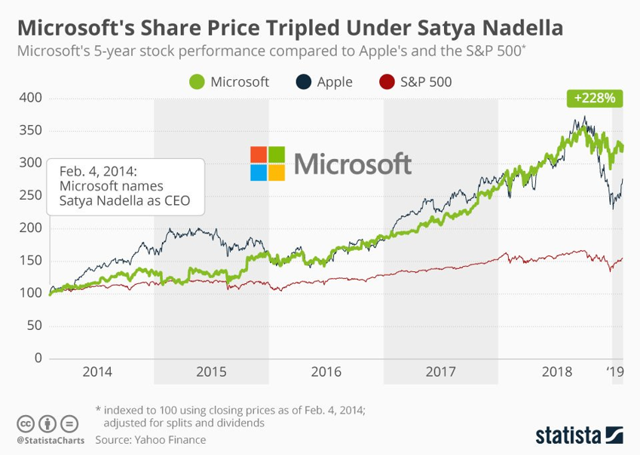 A look into the possibilities: Growth in artificial technology 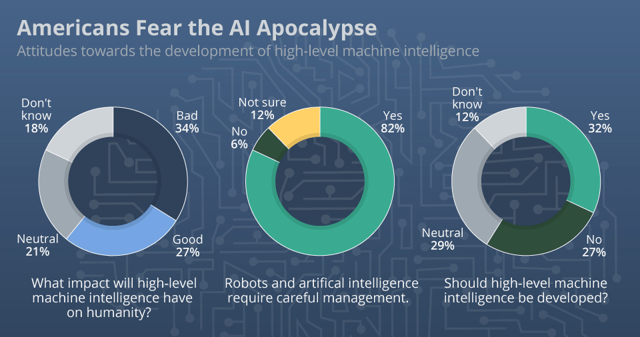 Despite uncertainty, MSFT is the company that gives people the most confidence in the development of artificial intelligence. The fact that consumers trust MSFT most in this work is very promising, especially considering that AI is an important growth driver in the industry. 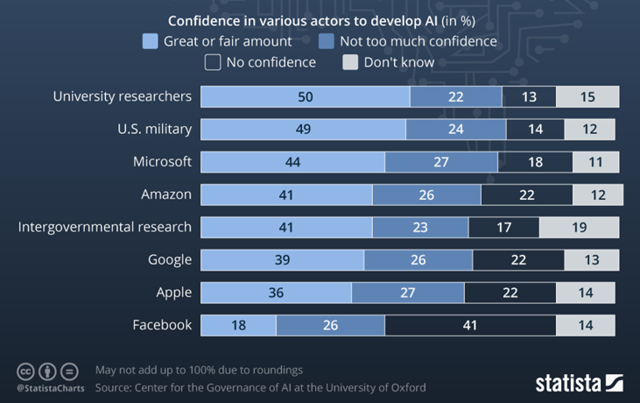 Microsoft also uses artificial health technologies through its recent partnership with Walgreens Boot is highlighted alliance. They have several important alliances in the industry that highlight the earlier point about partnerships, from Veradigm, a clinical research company, to ThoughtWire, an early warning application that can detect the risk of heart attack. 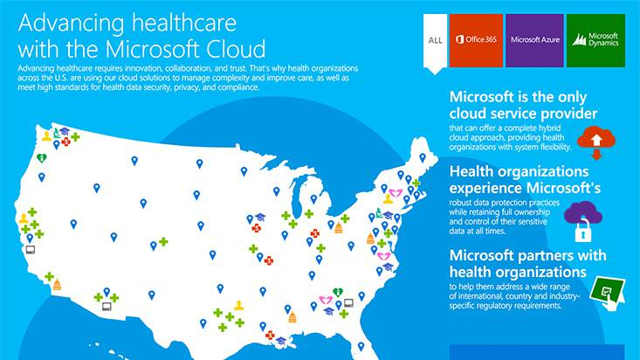 Artificial intelligence poses a significant risk, and companies have made sure that consumers are aware of the risks they bring with them as they develop the software. However, Microsoft is working on "democratizing AI" with aggressive investment across the board.

It is expected that the artificial intelligence market will have a CAGR of 62.9% between 2016 and 2022, which will grow from nearly $ 8 billion to almost $ 50 billion by 2020 Microsoft will also implement its Azure API to share health data in the cloud. The cloud has become a big focus for many of the top companies, with Amazon ahead of the pack and Google (NASDAQ: WelfL) investing $ 25.5 billion in 2018 to gain market share.

The Cloud: Clear Skies Ahead

] Amazon is a dominant player in this area with its Amazon Web Services product. They dominate in each region, and despite MSFT Azure's 76% revenue growth last quarter, this dominance will not disappear in the foreseeable future. 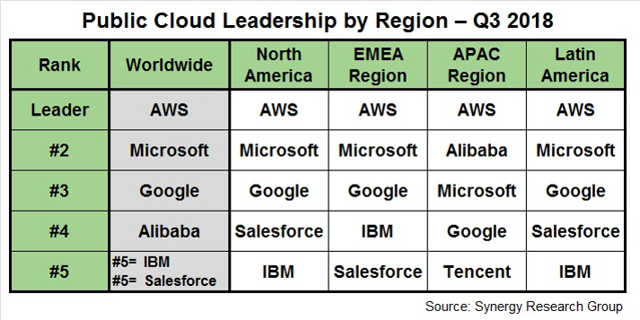 Microsoft is close behind, which is second only to most geographic regions. MSFT is a leader in enterprise SaaS and has an important role in the private cloud in Amazon. However, this segment of the industry is very competitive. 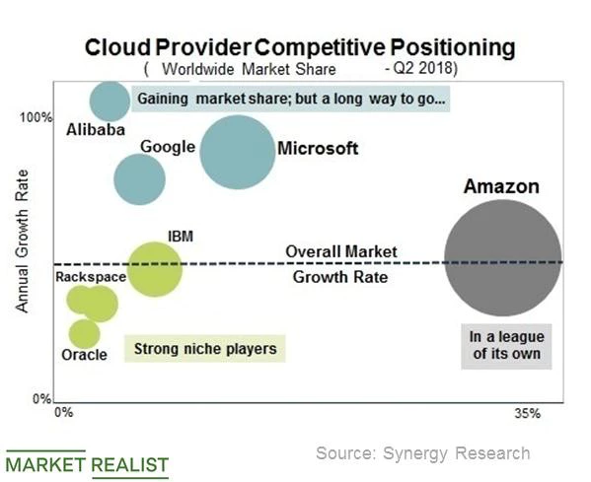 The cloud itself is designed for tremendous growth. In the past three years, IaaS + SaaS revenue has increased by $ 80 billion. These are different cloud platforms, with IaaS more in the hands of users and SaaS being fully managed by an outside company.

$ 300 Billion in Sales Expected Over the Next Five Years For IaaS + SaaS, this translates into growth of $ 60 billion a year from an average annual growth of $ 26.7 billion. Market penetration in the Tech market of 1.8TT is expected to increase to 24% in the coming years, compared to the penetration of 7% in 2018.

MSFT is expected to be a 70 -full revenue growth achieves its Azure platform compared to AMZN's 11x growth from its AWS platform . AWS has an advantage over Azure because it only came on the market in 2006. From 2006 to 2016, the company took ten years to get the first $ 10 billion of revenue from the product, but only two years for the next $ 10 billion. Now it is expected that they will earn $ 10 billion in 2019 alone . 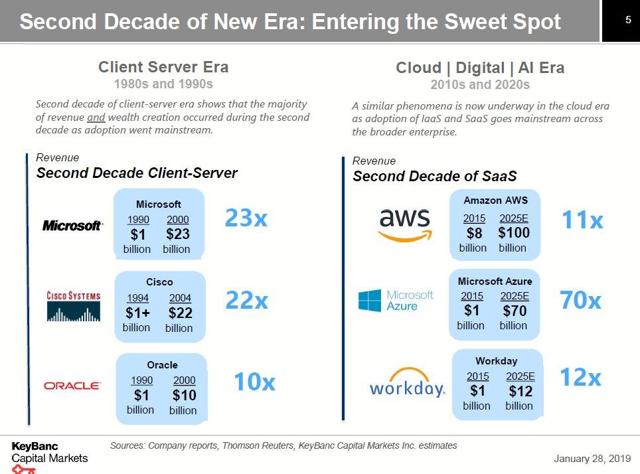 Source: Value Biased [19659039] Microsoft works the same way, but Amazon has a two-year lead. After 2020 MSFT should see the fast successes that the best competitor has experienced. They are still lagging behind, but momentum will be on their side, with forecasts that sales in 2021 will increase by $ 10 billion. 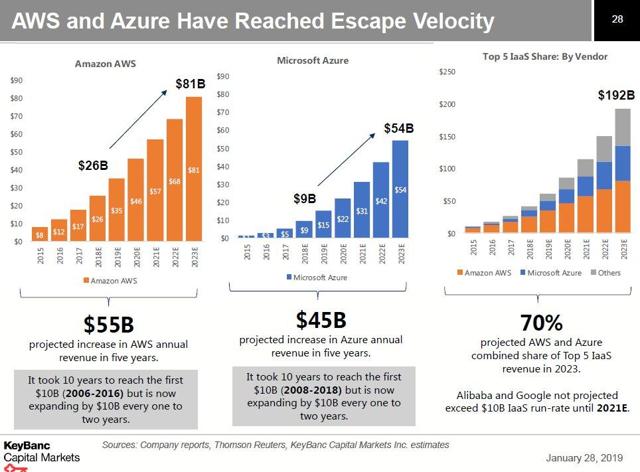 Both companies are not too transparent with the exact amount of money they earn from their products. AWS posted year-on-year revenue growth of 46.94%, from 17 to 18, a decline from previous growth figures. The same analysis for MSFT shows growth of 17.6% over the previous year, much lower than Amazon's growth metric. Quarter on quarter, AWS also outperformed the previous quarter, posting revenue growth of 45.3% from Q318 to Q418 versus MSFT's growth of 20.3% over a similar period.

Microsoft's Azure has some advantages over the Microsoft competitor, especially in terms of pricing. They offer on-demand pricing options. AWS is not usually the cheapest option, but it offers more services than its counterparts. Google's cloud product line tends to be the most expensive. 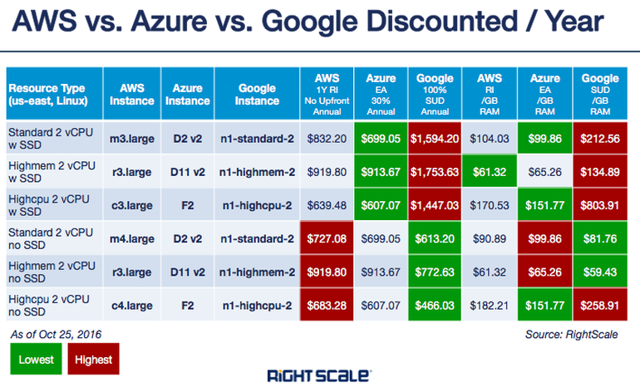 Microsoft also has a greater reach than its cloud competitors, which are located in 54 regions of the world. They have over 120 new subscribers each month for their product. It has the industry's largest compliance offer, which is important for the longevity of the corporate world. 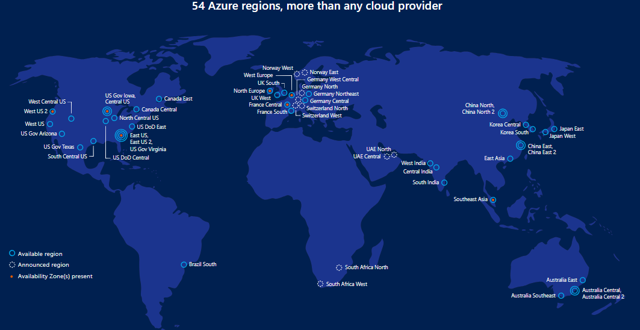 Strong growth in all areas

MSFT is growing in most of its key areas. and in most of the key growth opportunities for the industry. Azure will be a great opportunity for them, as well as games and hardware. They had no revenues for personal computing in the last quarter. The company pointed out that there was a mishap in the supply chain. However, its Intelligent Cloud segment exceeded expectations by 10.7%. 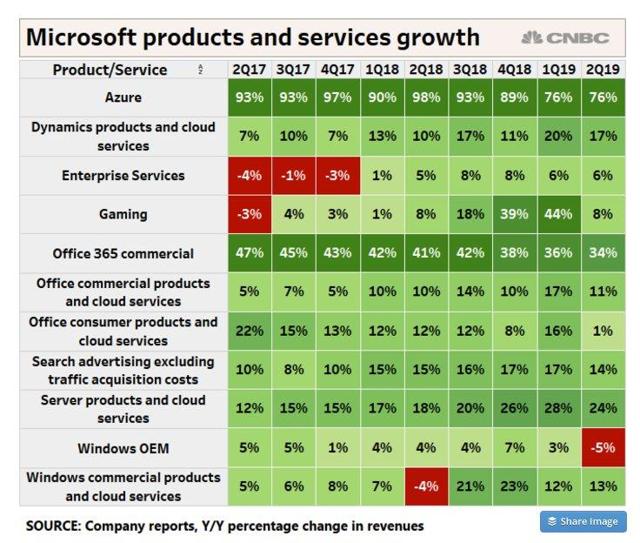 Office 365 Commercial was also a strong growth segment for the company. The customer base increased by 2.5% Q1. They had problems with office consumables and need to think about how they can handle the competition in this area. Okta, an integration network for various cloud platforms, has seen a massive increase in Microsoft Office 365. 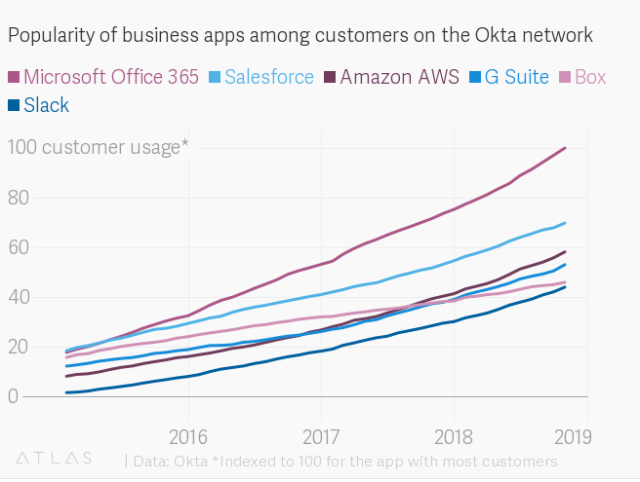 Migrating Through AMZN: A Peer-to-Peer Comparison

One advantage that Microsoft brings to its competitors is its product differentiation and geographic reach. The company generates roughly the same revenue streams from the Productivity and Business Processes, Intelligent Cloud and more Personal Computing segments. The latter segment recorded the lowest growth of 7.6% year-on-year, but the other two segments are in the line segment at 20.1% and 17.6%, respectively. 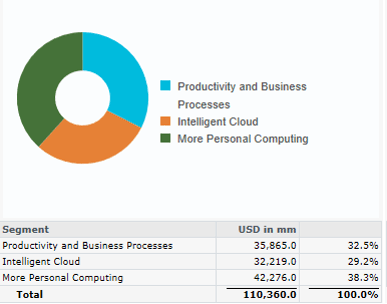 By comparison, Amazon generates about 50% of its sales in online stores, but is experiencing tremendous growth in each of its categories. As described in this article, AWS growth rates will be a continuing benchmark that the rest of the industry is trying to achieve. 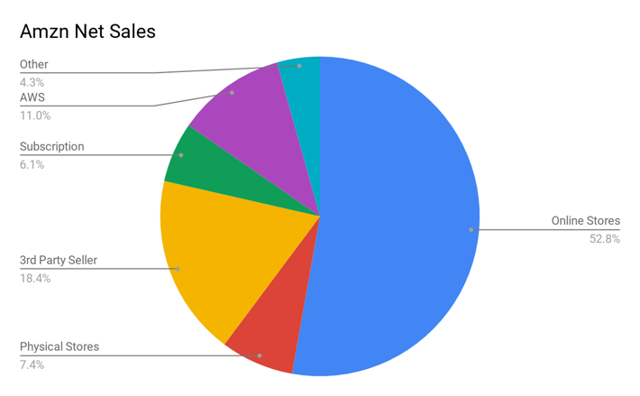 Amazon has outperformed Microsoft and the industry over the last three years. Microsoft has developed in line with the S & P 500 Software Index and achieved a performance of 111.8% against the performance of the index of 115.18%. This means that Microsoft has room to close the gap and possibly catch up with Amazon's return of 215.79%. 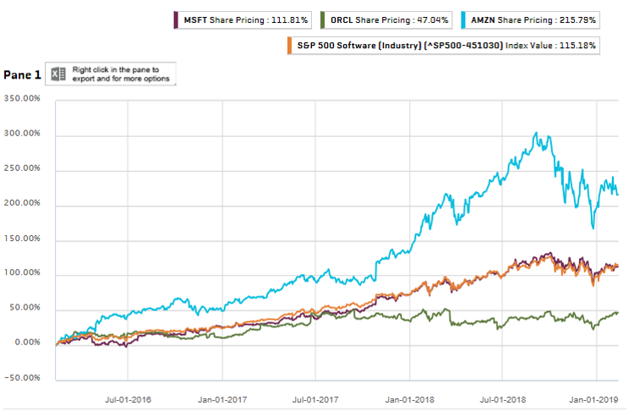 It's common knowledge that Amazon trades heavily. The entire tech industry has made massive ratings in recent years. Microsoft has a TEV / EBITDA of 15.44 compared to 28.43 from Amazon. The industry, represented by the orange line, has a value of 19.92, so using this metric, MSFT is trading at a lower cost than the industry as a whole.

The company invests heavily in research and development, which is good for its continued growth. It is also important that they do so in the face of Amazon's competitiveness in the cloud. 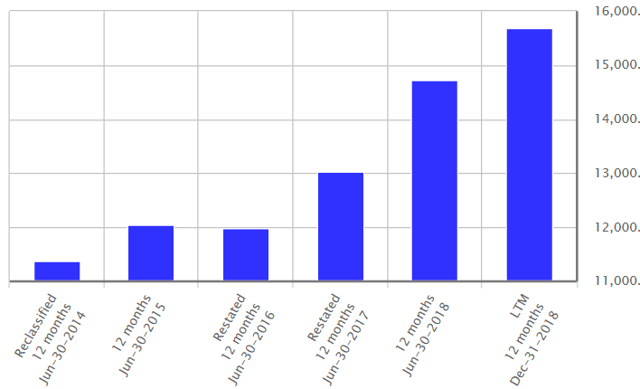 Their cash flows were not as strong as they once were, with year-to-year growth contracting nearly 9% in the last quarter. Their free cash flow in December 18 was also down only 1.8% on the previous year. This is a much stronger metric than the 17.2% negative growth seen in the first half of 2018. 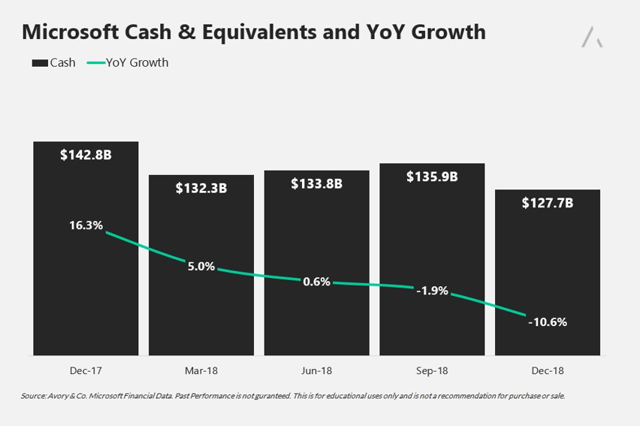 Microsoft has a strong brand name and a diversified product portfolio. They are open to cooperation and partnerships. They face some weaknesses, such as exploiting potential economies of scale and potential overexposure in some areas of the industry where they are inferior, such as consumer goods.

When a global slowdown occurs, demand for products offered by Microsoft is likely to decline, and there is a potential for regulatory constraints to affect business. Overall, however, cloud space continues to provide them with growth, are fairly valued, and have a number of growth opportunities outside the cloud space through games and the expansion of their Surface product line.

You need to focus on improving their cloud area cash flow, but they have experienced strong revenue growth that is expected to remain stable in the future, high gross profit margins and strong profit margins. All of their profitability margins improved over the course of 2018, and it appears that the company is eliminating some of the past problems. MSFT is a constant in a constantly changing industry and would greatly enrich portfolios that need a less risky method to get into the tech industry.

Disclosure: I / we have not mentioned stock items and have no plans to initiate positions within the next 72 hours. I wrote this article myself, and it expresses my own opinion. I can not get any compensation for it (except from Seeking Alpha). I have no business relationship with a company whose warehouse is mentioned in this article.