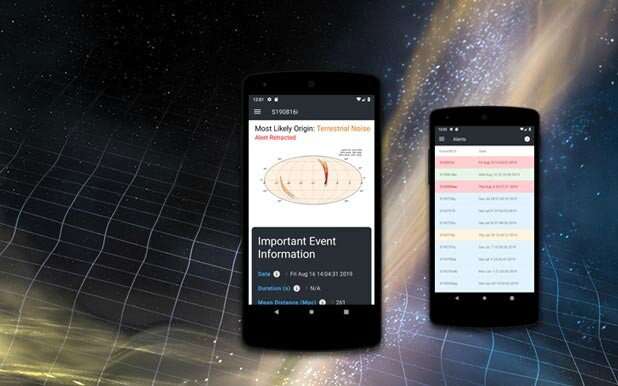 PhD students from the Institute for Gravitational Wave Astronomy have published their new wave of gravitational wave events in near real time.

Chirp, designed for use on mobile phones, displays the latest alerts from Lasers Interferometer Gravitational-Wave Observatory / Virgo about a possible new gravitational wave. For each new and previous alert, the signal indicates a black hole collision, or merging neutron stars.

These detections are made by an international team of scientists, including those from the University of Birmingham using the two LIGO detectors in the United States and the VIRGO detector in Italy. The LIGO detectors are the same detectors that won the Nobel Prize for Physics in 201

With the start of

Then Postgraduate student, now a research fellow Sam Cooper, is an expert in the field of public safety making the app.

"I wanted to showcase my young cousins ​​what I was doing at university and why I could not play Mario Kart with them during the week! in a clear and understandable way, which is the driving focus of chirp. "

Gravitational waves are generated by some of the most catastrophic, violent events occurring in the universe, such as the collision of black holes and neutron stars. The gravitational waves detected on 14 september 2015 each one of the black and white holes, each about 30 times the mass of our sun and more than a billion light years from Earth, merging to form a single, more massive black hole. Albert Einstein's 1915 theory of general relativity.

Sam Morrell another PhD student at the University of Exeter added:" So when Sam discussed with his vision for chirp – to make it easy to get involved wave alerts – I was excited to help out. "

The app can be downloaded at the links below.

Provided by
University of Birmingham