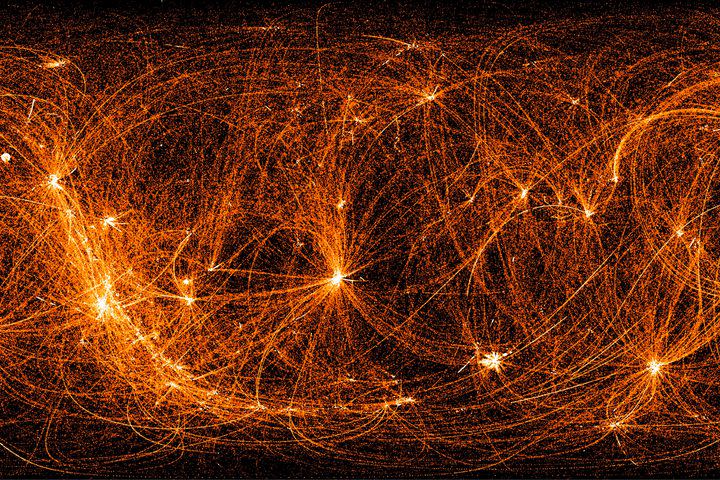 NASA looks deep into the cosmos at the bright, leftover ashes of exploded stars called pulsars.

Now the Space Agency has released a map-like image showing arcs and arcs of x-ray energy – invisible to the world naked eye – radiating from those dense nuclei of once massive stars.

The brightest spots are the presumed pulsars, which repeatedly emit X-ray energy into space. These traces of energy or electromagnetic radiation reveal the strong sources of these X-rays.

"Even with minimal processing, this image shows the Cygnus loop, a supernova remnant about 90 light-years across and estimated to be 5,000 to 8,000 years old," said Keith Gendreau of NASA, who was on the imaging mission NICER, "We are gradually building a new X-ray image of the entire sky and it is possible that NICER's nocturnal sweeps will uncover sources previously unknown."

Overall, this picture is an X-ray chart showing 22 months of radiation moving through space.

SEE ALSO: The mysterious laboratory that made the bomb now searches Mars for signs of life.

NICER will continue to search the cosmos for x-rays so they can better understand the sources of this energy – pulsars. Astronomers suspect that these stars act like lighthouses in the Universe and regularly emit X-rays or "pulsate" as they rotate.

Grasping how different Pulsars "Pulse" can be useful for future space travel through the solar system. NASA is planning a coherent map of pulsars that will essentially act as a "GPS system in space".

"As this technology matures, spacecraft can travel throughout the solar system and beyond," NASA said.