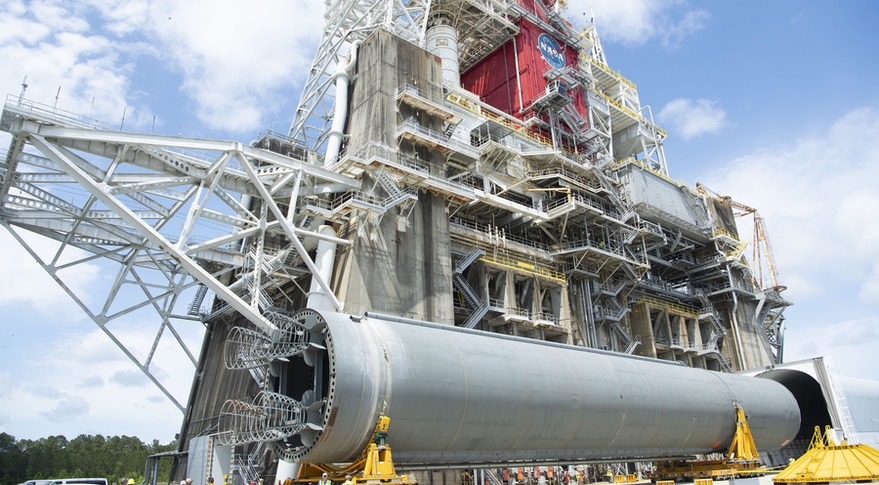 WASHINGTON – Four months after suggesting that a critical space launch test could be omitted to fix development delays, NASA administrator Jim Bridenstine announced on July 25 that the test will be retained.

In a statement by the agency, Bridenstine announced this NASA will continue the SLS "Green Run" test, which will be followed by an eight-minute static fire test at its core level at the Stennis Space Center in Mississippi. NASA did not announce when the test will take place, although it is expected to take place next year.

"The Green Run acceptance test provides NASA with the assurance that the new core phase will continue to function as it is intended to," said Lisa Bates, SLS Deputy Step-Ladder at NASA in this statement.

However, at a hearing on a subcommittee on budget on 27 March, Bridenstine suggested that the test might not be necessary. "Could we test each engine individually with very large deviations from the nominal conditions to gain certainty or at least eliminate as much risk or almost as much risk as if we were driving the green run?" He said.

] At this hearing, one day after Vice President Mike Pence announced that the government would set a new target for landing on the Moon by 2024, Bridenstine said that NASA is exploring ways to accelerate SLS development , If the green-run test is skipped, the date for the first SLS launch could be postponed by six months.

However, both members of Congress and external advisers have spoken out against this proposal. "There is no other approach to fully capture the integrated drive system operating data required for safe operation," said Patricia Sanders, Chair of the Aerospace Safety Advisory Board, at a meeting on April 25 on the Green Run-test the committee. "I can not stress that we advise NASA to continue this test."

In the following months, NASA officials said they had not made a decision on the Green Run, but hinted that they would at least try to maintain it in some form. In recent interviews and statements, Bridenstine had announced that, following the surprise reassignment of Bill Gerstenmaier and Bill Hill on July 1

0, a new line would be established in the Exploration and Operations Mission Directorate before deciding to conduct the test.

] "I want to make sure we get these top people in position and then let them watch the program," Bridenstine said in an interview on C-SPAN on July 12th. "Ultimately, they will decide what tests to do."

NASA still needs to find a permanent replacement for Gerstenmaier, who served as deputy administrator for human exploration and operations, or Hill, former deputy associate administrator for exploration system development. The agency has not explained why it has made its green run decision now.

However, the decision was welcomed by many. "The decision by Administrator Bridenstine to continue the Green Run is a vote of confidence in the Stennis Space Center and its dedicated staff," said Senator Roger Wicker (R-Miss.), Chairman of the Senate Trade Committee. He asked Bridenstine during a hearing of his committee on July 17 after the test, and Bridenstine responded again that he would wait until a new team was in office before taking this decision.

"We are very excited about the decision to continue the core phase's Green Run test," said Richard Gilbrech, director of Stennis. The center had already modified the B-2 test center in the middle, previously used for testing the Saturn V and Space Shuttle engines, to support the core stage.

core agency and support the agency as we move forward with the Artemis program on our way to the moon as a springboard to Mars. "