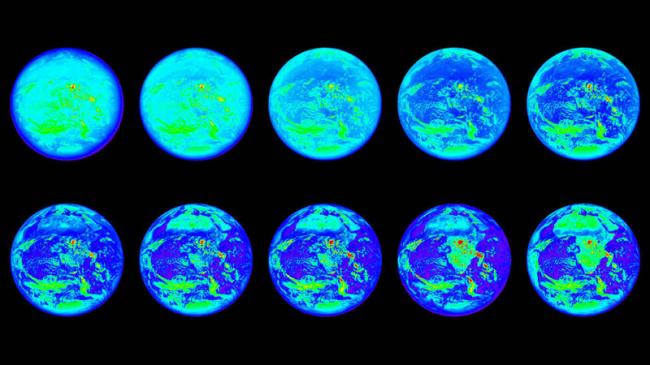 New York, June 30 (IBNS): Exploring exoplanets – planets outside our solar system – could help scientists answer big questions about our place in the universe and whether life exists beyond the Earth.

But these distant worlds are extremely weak and hard to visualize directly. A new study uses Earth as a substitute for an exoplanet and shows that even with very little light – as little as one pixel – it is still possible to measure key features of distant worlds, see the NASA website [19659003ThisnewstudyusesdatafromtheEPICInstrumentsoftheNASontheDeepSpaceClimateObservatoryoftheNationalOceanicandAtmosphericAdministration(DSCOVR)islocatedatDSCOVRumcrossingtheLocation-Point1ofaspecificorbittheEPICprovidesaconstantviewofthesunlitsurfaceofourhomeplanetEPICobservedthepresenceJune201

The EPIC instrument detects reflected light from Earth in 10 different wavelengths or colors. Every time EPIC takes a picture of the Earth, it actually captures 10 pictures. The new study averages each image into a single brightness value or the equivalent of a "one-pixel" image for each wavelength. A single one-pixel snapshot of the planet would provide very little information about the surface. In the new study, however, the authors analyzed a data set of individual images taken several times a day in 10 wavelengths over a longer period of time. Despite the fact that the entire planet was reduced to a single point of light, the authors were able to identify water clouds in the atmosphere and measure the rotation speed of the planet (the length of its day). The authors point out that the study in the June 27 issue of the Astrophysical Journal shows that the same information can be derived from one-pixel observations of exoplanets.

"The benefit of Earth as a proxy for an exoplanet is that we can verify our conclusions from the one-pixel data with the wealth of data we actually have for the Earth – we can not do that if we did Using data from a remote, actual exoplanet, "said Jonathan Jiang, an atmospheric and environmental researcher at NASA's Jet Propulsion Laboratory in Pasadena, California, and lead author of the new study.

A Tiny Ray of Light

When Jiang's daughter Teresa was in elementary school, he organized a star-gazing event for her and her friends. Jiang pointed to the stars and told his daughter that the sun is also a star, and that there are planets orbiting other stars as planets orbit the sun. She urged her father for more information and asked how scientists could possibly learn about these distant worlds from such tiny points of light in the sky.

"Children ask many good questions," Jiang said. "And I remembered that question – if I can see an exoplanet as a tiny point of light, can I see clouds and oceans and land?"

Jiang began his career in astrophysics, but for his doctoral thesis, He decided to apply his computer and physical modeling skills to the Earth's climate. Now he uses climate data to support the study of exoplanets. Exoplanets are much darker than stars and much harder to spot. Earth, for example, is about 10 billion times weaker than the Sun. Only about 45 exoplanets were discovered by direct imaging, all much larger than Earth. The majority of known exoplanets (more than 3,700 have been confirmed) have been indirectly detected, using techniques such as the transit method, in which scientists observe the slight darkening of a star caused by the transit of an exoplanet over the surface of the star]. Device intercepts reflected light from the sunlit side of the earth in 10 different wavelengths or colors, as different materials reflect different wavelengths of light to varying degrees – plants, for example, mainly reflect green light. And a reddish planet like Mars, for example, would have a completely different color profile than a planet covered in ice.

The new study shows that by observing a planet with certain features over time – such as oceans and continents – it is possible to measure the rotational velocity of the planet by observing a repeating pattern in the reflected light. This pattern would result from those planetary features that come in sight with a regular cadence. For example, Australia and the Pacific fill the field of view of the EPIC every 24 hours, and about 12 hours later, South America and the Atlantic Ocean fill the border between Africa and the Indian Ocean. This pattern of changing light would be repeated day after day. In the new work, the authors show that they can recognize this repetitive cycle and thus determine the rotation rate or the length of the planet. The rotational speed of a planet can shed light on how and when the planet originated and is a particularly difficult property that can be measured using current methods.


"There has been talk for some time that this approach can measure the rate of exoplanet rotation, but there was no evidence that it could work because we had no real data," said Renyu Hu, an exoplanet scientist at JPL and a co-author of the new study. "We have shown that at every wavelength the 24-hour period occurs, which means that this approach to measuring planetary rotation is robust."

The authors note, however, that the effectiveness of this method depends on the unique characteristics of the planet. A pattern of the daily cycle may not be visible on a planet that is largely homogeneous on its surface. For example, Venus is covered by thick clouds and has no oceans on its surface, so a recurring, monotonous pattern may not or perhaps not clearly enough to be seen in a one-pixel image. Planets like Mercury and Mars would also be a challenge, but Jiang said planetary features such as craters could also contribute to a pattern that could be used to measure the rotation period.

Earlier studies used the Earth as a proxy for exoplanets to investigate which types of planetary properties could be derived remotely, but no previous studies have investigated so many wavelength ranges. This is also the first such study to cover such a large dataset over a longer period of time: more than 27 months of observation were used, with EPIC taken about 13 times a day.

Direct observations of exoplanets have much less data than those used in the new study, but the researchers report that measuring the rotational velocity of an exoplanet with more than 90 percent confidence is a record of only two to three times per round trip period would require (ie, per "day […] on this particular exoplanet for approximately seven orbital periods.]

The time astronomers need to observe an exoplanet to determine its rotational speed also depends on how much unwanted light The EPIC data provide an exceptionally clear view of the earth, largely independent of light from other sources, but a primary challenge in direct imaging of exoplanets is that they are so much weaker than their parent stars. The light of the near star can slightly exceed the light of an exoplanet and make the latter invisible. If the signal from the planet is competing with the star's light, it may take longer to detect a pattern that could reveal the planet's rotation speed. NASA is investigating possible designs for next-generation telescopes that could directly represent Earth-like exoplanets.

With the field of direct exoplanet imaging, Jiang does not move on to the question his daughter asked him more than a decade ago. If scientists could learn about the surface features of distant planets, could they then answer an even bigger question his daughter has asked – living on any of these planets?

The US-Russian crew flies to the International Space Station