Neanderthal cannibalism is less surprising than you think 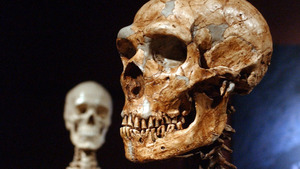 A recent study suggests that a group of Neanderthals in southeastern France have resorted to cannibalism to survive lean times. If that says something about Neanderthals, then they are not so different from us – for the better and the worse.

The Bones in the Cave

20,000 years ago in the Moula Guercy Cave in southeastern France. Archaeologists excavating the site in the early 1990s found the bones of six Neanderthals near the eastern wall of the cave. They were untied and mixed with bones of game and other wildlife. This mixing of bones, as if the dead Neanderthals were discarded with the remnants of their food, is strange enough; There is much evidence that Neanderthals have usually buried their dead. At Moula-Guercy, however, at least six Neanderthals – two adults, two teenagers and two children – were treated very differently. Their bones and those of the stag show almost identical marks of cutting, scratching and tearing, the kind of damage normally associated with slaughter.

"If numerous human remains are discovered on an undisturbed living space, with similar damage patterns mixed with animal remains, stone tools and fireplaces, they can legitimately be interpreted as proof of cannibalism," wrote Alban Defleur and Emmanuel Desclaux in a recent Journal of Archaeological Science The knuckles, elbows and feet of the dead show signs of chopping and cutting to dissect large sinews, and the thigh bones still bear the marks of stone implants used to remove the muscle, as well as the Stone hammers and anvils used to break the bone to get into the medulla. And whoever did the work was thorough. On a skull, Defleur pointed out that "the successive signatures of the same stone edge of the tool indicate the filleting of the temporalis muscle." This is the broad, fan-shaped muscle on the side of the head used during chewing. And at least one of the lower jaw of the youthful Neanderthals had prints that indicated the tongue was cut out. Two of the phalanges (finger bones) even have markings that are more reminiscent of Neanderthal teeth than of carnivores.

For the past twenty years, archaeologists have debated what it means. Evidence of possible cannibalism has surfaced at a handful of other sites across Europe, though not everything is as clear as the scene in Moula-Guercy. We understand relatively little about the lives of Neanderthals, so it is easy to ask if killing the dead (with or without food) was part of a funeral rite. After all, there is a precedent for this in several human cultures. However, we have evidence of intentional and cautious burials in at least 17 locations in Europe, the Middle East and Asia. Suggestions for cannibalism are much rarer, and it does not look as if the bones of Moula-Guercy were discarded with all due care.

Instead, a new study suggests the environment in southeastern France at that time The telltale cut marks on the bones were the work of desperate people struggling to survive. As the archaeologist TD White wrote in a newspaper in 2003, "People usually eat because they are hungry, and most prehistoric cannibals were probably hungry."

Tens of thousands of years had lived in a cold Neanderthal man Steppe where large mammals such as reindeer and woolly mammoth roamed herds. What we know about Neanderthals so far is based on a chemical analysis of their bones, which suggests that meat was an important part of their diet and that they relied less on plants and fish than many modern human hunter-gatherers.

Although this was the case Similar to ours – enough, as we did, to produce children with Homo sapiens and to leave traces of their DNA in today's genomes – their bodies were built somewhat differently. Some studies estimate that average Neanderthals needed more calories to keep going: around 3,500 to 5,000 a day. But they had relied on a bigger and richer game.

But things finally changed (which is probably the most accurate summary of human history we'll ever get). Around 130,000 years ago, the world became warmer. From sea sediments and sea ice, we know that global temperatures have risen by about 2 ° C and sea levels have risen six to nine meters (19.69 to 29.53 feet). The landscape that the Neanderthals had spent millennia was getting warmer and drier.

Pollen and insects in sediment cores and wood remains of prehistoric flocks suggest that the formerly open steppe became a patchwork of forest and grassland. Smaller deer grazed in lesser numbers than the great herds of the steppes.

Forests challenge modern human hunters and gatherers to make a living, and this relatively small prey could not be enough to defend the Neanderthals. In Moula-Guercy, there are several teeth with thinner enamel band (called linear enamel hypoplasia) that signify periods of severe illness or malnutrition. These people had a hard life and were probably starving a few times.

If Defleur and Dasclaux are right, for the band Moula-Guercy was likely to use as a summer and fall hunt, things became almost post-apocalyptic campgrounds (based on artifact layers and bones at the site). Neanderthal sites dating back to the last interglacial period are much rarer than they were before and after the Ice Age, suggesting that most Neanderthals have left the region for more hospitable regions or are simply not surviving the change – the problem is a long one Away from populated.

The population density of Neanderthals was rather sparse compared to later modern human groups. In any case, one version of the story implies that the band in Moula-Guercy was among the only ones left in the area. The rest is all too easy to imagine, as the dental prints on these fingerbones tell their own story.

The same story that continues throughout our history: the great famine in 14th century Europe, the starving time in Jamestown, the Thunder party, the survivors of a 1972 plane crash in the Andes and the Algonquian story of the Wendigo.

Based on the distribution of remains and the number of broken bone fragments, Defleur Dasclaux says that the bodies in Moula-Guercy are likely to represent a single, desperate incident of cannibalism, not a long-term strategy. The remnants of all six people together would have fed a group of 15 to 25 people (about the size of an average hunter-gatherer group) for about two days – maybe four days with careful rationing. Subsequent layers of artifacts suggest that Neanderthals would return again and again to use the campsite in later years, although there is no way to tell if they were the same people or if they knew what had happened there the only way to survive requires a psychological toll, and we must ask ourselves how the Neanderthals of this site have processed their experiences. We know that Neanderthals cognitively resembled us; They created art and jewelry, used their symbols with symbols and buried their dead. How would they feel about eating their dead to survive? We can only speculate.

"The cannibalism emphasized by Baume Moula-Guercy is not a sign of bestiality or subhumanity," wrote Defleur and Dasclaux. If anything, that's a deeply human story of difficult decisions in desperate times.