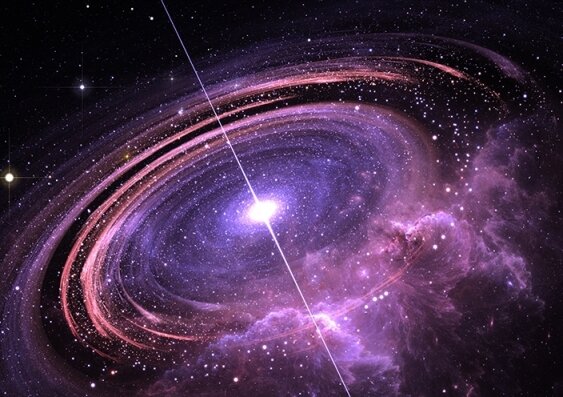 A universal constant not only appears to be annoyingly inconsistent on the outer edge of the cosmos, it only occurs in one direction, which is strange.

Those looking forward to a day when science̵

7;s Grand Unifying Theory of Everything could be worn on a T-shirt may have to wait a little longer as astrophysicists continue to find evidence that one of the cosmological constants is not as constant after all is.

Published in an article Advances in scienceUNSW Sydney scientists reported that four new measurements of light emitted from a quasar 13 billion light years away confirm previous studies that found tiny deviations in the fine structure constant.

John Webb, a professor at UNSW Science, says the fine structure constant is a measure of electromagnetism – one of the four fundamental forces in nature (the others are gravity, weak nuclear power, and strong nuclear power).

“The fine structure constant is the size that physicists use as a measure of the strength of the electromagnetic force,” says Professor Webb.

“It is a dimensionless number, which is about the speed of light, the so-called Planck constant and the electron charge, and it is a ratio of these things. And it is the number with which physicists measure the strength of the electromagnetic force.”

Electromagnetic force whips electrons around a nucleus in every atom of the universe – without them, all matter would fly apart. Until recently, it was considered a force that was unchangeable in terms of time and space. Over the past two decades, however, Professor Webb has identified anomalies in the fine structure constant where the electromagnetic force measured in a particular direction of the universe appears to be slightly different.

“We found a hint that this number of fine structure constants was different in certain regions of the universe. Not just as a function of time, but also in the direction of the universe, which is really strange when it is correct … but we have found. “

When Professor Webb first encountered these early signs of somewhat weaker and stronger measurements of electromagnetic force, he thought it could be a fault in the equipment, his calculations, or some other error that had led to unusual readings. When looking at some of the most distant quasars – massive celestial bodies that emit exceptionally high energy – at the edges of the universe, these anomalies were first observed with the world’s most powerful telescopes.

“The most distant quasars we know are about 12 to 13 billion light years away from us,” says Professor Webb.

“So if you can examine the light from distant quasars in detail, examine the properties of the universe as it was in its infancy, just a billion years old. The universe was very, very different at the time. No galaxies existed, the early stars had formed, but there was certainly not the same population of stars that we see today, and there were no planets. “

He says the team in the current study examined such a quasar, which allowed them to study back when the universe was only a billion years old, which had never happened before. The team made four measurements of the fine constant along one line of sight to this quasar. Individually, the four measurements did not provide a conclusive answer to whether or not there were any noticeable changes in the electromagnetic force. In combination with many other measurements between us and distant quasars performed by other scientists and not related to this study, the differences in the fine structure constant became apparent.

“And it seems to support this idea that there could be directionality in the universe, which is very strange indeed,” says Professor Webb.

“So the universe may not be isotropic in its physical laws – statistically the same in all directions. In fact, there could be one direction or preferred direction in the universe in which the laws of physics change, but not in the vertical direction. With others Words, in a sense, the universe has a dipole structure.

“In one direction we can look back 12 billion light years and measure electromagnetism when the universe was very young. When you summarize all the data, electromagnetism seems to gradually increase the further we look while it gradually decreases in the opposite direction. In other directions in the cosmos, the fine structure constant remains exactly this constant. These new, very distant measurements have pushed our observations further than ever before. “

In other words, in an arbitrarily random spread of galaxies, quasars, black holes, stars, gas clouds, and planets – with life blooming in at least one tiny niche – the universe suddenly seems to have the equivalent of a north and a south. Professor Webb is still open to the idea that these measurements, taken at different stages using different technologies and from different locations on Earth, are in fact a massive accident.

“This is something that is taken very seriously and is rightly viewed with skepticism, even though I did the first work with my students on it. But it is something that has to be tested because it is possible that we live in a strange universe. “

In addition to arguing that these results are more than coincidental, a team in the United States that was completely independent and unknown to Professor Webb made observations on X-rays that seemed to agree with the idea that the universe has some kind of directionality.

“I didn’t know anything about this paper until it appeared in the literature,” he says.

“And they don’t test the laws of physics, they test the properties, the X-ray properties of galaxies and galaxy clusters, and the cosmological distances from Earth. They also found that the properties of the universe in this sense are not isotropic and there is a preferred one Direction. And lo and behold, their direction matches ours. “

Life, the universe and everything

Professor Webb still wants more rigorous testing of ideas that electromagnetism can fluctuate in certain areas of the universe to give it some form of directionality. However, if these results continue to be confirmed, they can explain why our universe is the way it is and why there is life in it at all.

“For a long time it was assumed that the laws of nature are perfectly coordinated to determine the conditions for the prosperity of life. The strength of the electromagnetic force is one of these quantities. If it only deviates a few percent from the value if we measured on earth, would be the chemical evolution of the universe is completely different and life could never have got going. This raises an exciting question: is this “goldilocks” situation in which basic physical quantities such as the fine structure constant are “just right”? To our existence , does this apply to the entire universe? “

If there is directionality in the universe, argues Professor Webb, and if it is shown that electromagnetism differs slightly in certain regions of the cosmos, the most basic concepts that underlie much of modern physics need to be revised.

“Our standard model of cosmology is based on an isotropic universe that is statistically the same in all directions,” he says.

“This standard model itself builds on Einstein’s theory of gravitation, which itself explicitly presupposes the constancy of the laws of nature. If such basic principles only prove to be good approximations, the doors are open to some very exciting new ideas in physics.” “

Professor Webb’s team believes this is the first step toward a much larger study that examines many directions in the universe and uses data from new instruments on the world’s largest telescopes. New technologies are emerging to provide higher quality data, and new analytical methods for artificial intelligence will help automate measurements and make them faster and more accurately.

Do we live in a special part of the universe?


Quote::
New evidence suggests that natural laws are “downright strange” and not as constant as previously thought (2020, April 27).
accessed April 27, 2020
from https://phys.org/news/2020-04-laws-nature-downright-weird-constant.html