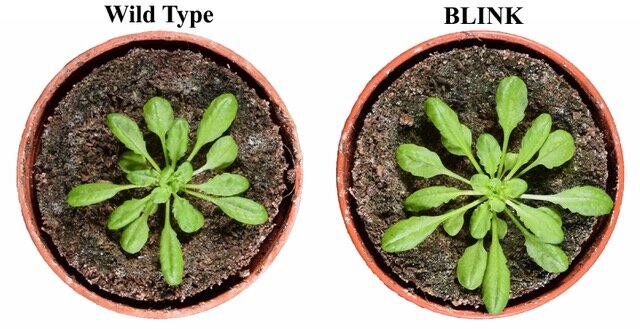 A team of scientists has identified a new, sustainable pathway for plants to increase the uptake of carbon dioxide (CO 2 ) for photosynthesis while reducing water use.

The breakthrough was led by a team of plant scientists at the University of Glasgow and is published today in the journal Science . The researchers used a new synthetic, light-activated ion channel made from plant and algae virus proteins to accelerate the opening and closing of stomata pores in the leaves of plants, through which carbon dioxide (CO 2 ) occurs for photosynthesis.

Stomata are also the main route to water loss from plants. Previous attempts to reduce water consumption by manipulating these pores have generally been associated with cost of uptake of CO 2 .

As a result, the plants developed in Glasgow showed improved growth while saving water.

The scientists "Modified plants grew normally and significantly better under normal field conditions and fixed more CO 2 while less water was lost to the atmosphere.

Irrigation of crops accounts for about 70% of freshwater consumption The planet and its use has expanded at unsustainable rates over the past three decades, and scientists have been trying to find ways to grow plants with less water. "So far, much of the research has reduced water use, but at a cost to the environment Reduction of CO content 2 and plant growth In view of the growing demands on agricultural food production, this is not a satisfactory approach overall.