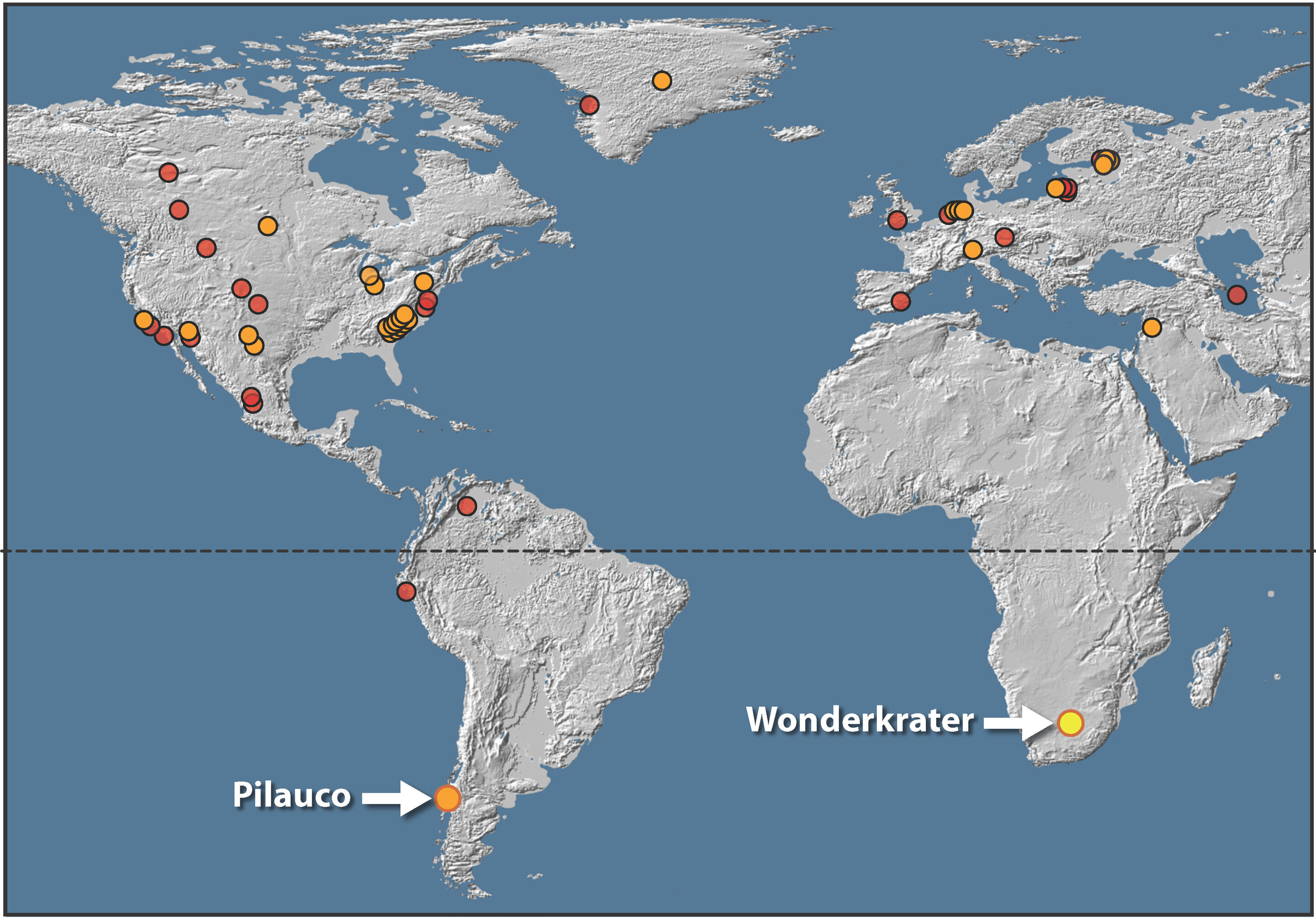 2,800 years ago, leading to global consequences including climate change and the extinction of many species of large animals at the time of an episode called The Younger Dryas.

The team led by Professor Francis Thackeray from the Institute for Evolutionary Studies at the University of Witwatersrand in Johannesburg, South Africa, discovered evidence of a notable "platinum peak" at a location called Wonderkrater in Limpopo Province, north of Pretoria, South Africa. In collaboration with researcher Philip Pieterse of the University of Johannesburg and Professor Louis Scott of the University of the Free State, Thackeray discovered this evidence at a core that was drilled in a peatland site, specifically a sample that was about 12,800 years old , This study was published in Palaeontologia Africana .

Noting that meteorites are rich in platinum, Thackeray said, "Our discovery supports, at least in part, the controversial Younger Dryas Impact Hypothesis (YDIH), and we must seriously consider the view that an asteroid impact anywhere in the world is causing climate change in the planet has caused global scale and to some extent contributed to the extinction of large animals at the end of the Pleistocene after the last Ice Age. "

Many mammals died during the younger Dryas era in North America, South America and Europe. In South Africa some exceptional large animal species have died out, not necessarily exactly 12,800 years ago, but close to this period. These mega fauna include a huge African buffalo, a large zebra and a very large gnu.

It is possible that the human population was indirectly affected at the time in question. In North America, there is a dramatic end to the Clovis people's stone tooling technology. Notably, archeologists in South Africa have noted that the Robberg artifact industry has been shut down almost simultaneously in some parts of the country, including the Boomplaas area, near the Cango Caves on the Southern Cape near the city of Oudshoorn. "Without necessarily arguing for a single causal factor on a global scale, we cautiously point out that these technological changes in North America and the African subcontinent may be indirectly related to an asteroid effect at about the same time, with large global consequences," says Thackeray. "We can not be sure, but a cosmic influence could have hit humans as a result of local environmental changes and the availability of foodstuffs associated with sudden climate change."

In Wonderkrater, the team was able to demonstrate that, about 12,800 years ago, there was a temporary cooling-off associated with the well-documented "Younger Dryas" temperature drop in the northern hemisphere and now also in South Africa. According to some scientists, this cooling could have been at least possibly associated with the global spread of platinum-rich airborne dust in large areas.

In northern Greenland under the Hiawatha Glacier, a large crater with a diameter of 31 kilometers was discovered. "There is evidence to support the view that it may have been the exact spot where a large meteorite struck Earth 12,800 years ago," says Thackeray. "If that was indeed the case, there must have been global consequences."

Thackeray's team believes that the discovery of a platinum peak about 12,800 years ago in Wonderkrater is only part of the growing belief that an asteroid or comet strike may have occurred at that time.

This is the first indication in Africa of a platinum peak that precedes climate change. Recent Dryas spikes in platinum have also been found in Greenland, Eurasia, North America, Mexico, and more recently Pilauco in Chile. Wondercrater is the 30th in the world for such evidence.

"Our evidence is fully consistent with the Younger Dryas Impact Hypothesis," says Thackeray.

The discovery in South Africa is to be integrated into the discovery in other parts of the world, as the source of platinum in Wondercrater could be hypothetical cosmic dust, which was distributed in the atmosphere after a meteor impact in Greenland.

The likelihood that a large asteroid will hit Earth in the future may be small, but there are thousands of large rocks scattered mainly between Jupiter and Mars. One classified as Apophis 99942 is referred to as a "potentially dangerous asteroid". It is 340 meters wide and will come exceptionally close to Earth in 10 years.

"The next meeting will take place on Friday, April 13, 2029," says Thackeray. "The likelihood of the Apophis 99942 asteroid hitting us is only one in 100,000, but the likelihood of an impact could be even higher at a later date as it approaches Earth every 10 years."

Geological evidence supports the theory that a major cosmic impact event occurred about 12,800 years ago

Quote :
New research supports the hypothesis that asteroids have contributed to mass extinction (2019, October 2)
retrieved on 2 October 2019
from https://phys.org/news/2019-10-hypothesis-asteroid-contributed-mass-extinction.html