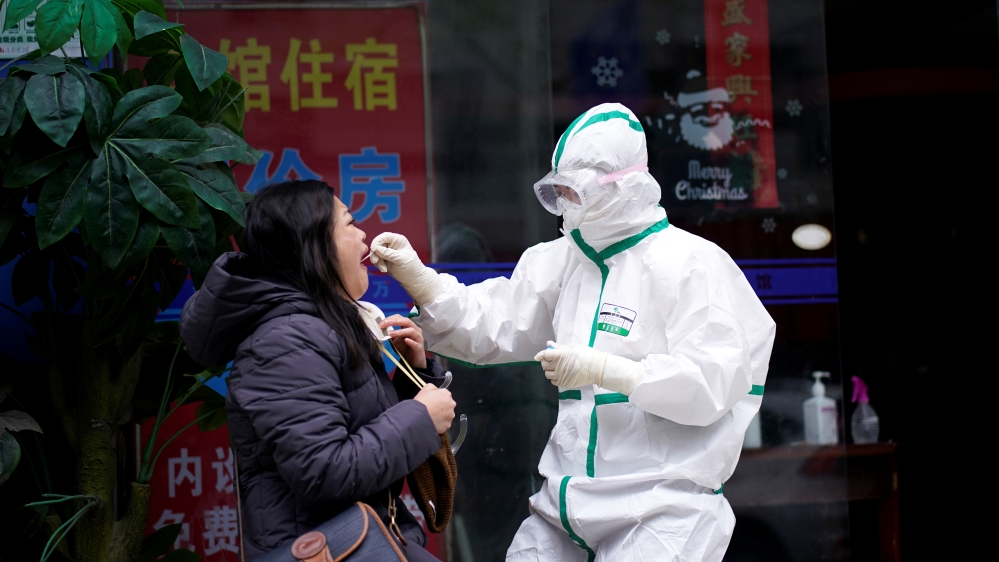 US President Donald Trump has extended the federal guidelines on social distancing until April 30 after a senior US health official warned that more than 100,000 people could die from the corona virus.

The announcement came on Sunday evening when the death toll in the severely affected state of New York exceeded 1,000.

“The modeling estimates that the peak mortality rate is expected to be reached in two weeks,” Trump told White House reporters. “So, in the next two weeks and at this time, it is very important that everyone follows the guidelines closely … We will extend our guidelines until April 30th to slow the spread.”

The initial 15 day period should expire on Monday.

The United States has 139,000 confirmed coronavirus infections, more than any other country in the world, while more than 2,400 people have died from the respiratory disease caused by the pathogen.

The government of Nepal extended a nationwide ban introduced on March 23 by another week. International flights are also prohibited until April 15th.

The Himalayan country has registered a total of five infections with the new corona virus.

According to the Asahi newspaper, all visitors from the United States, China, South Korea and most of Europe are denied entry to Japan according to new rules to curb coronavirus infections.

Asahi cited government sources and said the Japanese Ministry of Foreign Affairs is also expected to advise Japanese nationals not to travel to these countries.

Severe restrictions on movement in India have made access to health care difficult for people with chronic diseases such as HIV, kidney and autoimmune diseases.

The parents of a 15-year-old HIV patient walked 20 miles to get their medication in New Delhi.

“We could quickly face a non-COVID humanitarian crisis if the government is unable to restore health services, especially for those with critical conditions who require sustained medication / treatment,” said Malini Aisola, an activist for public health and co-organizer of the All India Drug Action Network.

04:51 GMT – Australia is tightening the curbs at public gatherings

New rules that limit public gatherings to just two people in Australia come into effect on Monday at midnight. The states of New South Wales and Victoria impose heavy fines on people who violate these restrictions.

Prime Minister Scott Morrison said members of the public should only leave their homes to buy groceries, attend medical appointments, and do sports.

Skate parks, outdoor gyms, and public playgrounds across the country, he said.

According to Katrina Yu from Al Jazeera, concerns about a second wave of infection in China are growing under official pressure to resume normal life.

“In Wuhan, the epicenter of the Chinese Corona virus outbreak, some stores are open and after two months, shopping centers are opening their doors. People working in key industries like cement, steel and auto are also starting to go back to work “said Yu from Beijing.

Our correspondent said officials were “under tremendous pressure to resume normal life” as President Xi Jinping traveled to a port and industrial park in eastern Zhejiang province on Sunday to review the resumption of work and production there.

“He wants to bring the economy to a standstill after two months. And because of the urgency to get things going, there are concerns that it could be too early and lead to a second wave of infections,” she said. “Officials are also under pressure to keep the numbers low and this leads to concerns that they may not be transparent when reporting new cases.”

Executives will check the QR codes on the cell phones of people entering a mall at the entrance in Wuhan, Hubei Province on March 30, 2020 [Aly Song/ Reuters]

When the Thai government started closing the country’s capital, Bangkok, last week, tens of thousands of migrant workers who were suddenly unemployed tried to return to Myanmar.

But for Ma Moe Moe, returning home is not an option. The 44-year-old worker was recently fired from her job in a silk clothing factory, but she crouches with her husband in Bangkok and says she fears she won’t be able to return to Thailand if she leaves.

“Because I’m fired from the factory, I’m worried about bills because there’s only one source of income for my husband,” she said to Al Jazeera. “Now that I don’t have a job, I feel depressed.”

Read more about the plight of migrant workers in Thailand here.

The far-right leader had posted several videos on Twitter on Sunday, mingling with supporters in the streets of the Brazilian capital, Brasilia, who defended their right to work and called for a “return to normal”.

In one of the deleted videos, Bolsonaro also criticized health authorities’ isolation measures, saying, “The country is immune when 60 to 70 percent are infected.” He also said that treatment for the coronavirus had been found without providing evidence to support the allegation, the Globo news website said.

Argentine President Alberto Fernandez extended a nationwide quarantine to mid-April to curb the spread of the new corona virus.

“We will extend the quarantine until the end of Easter. What do we want to achieve? To keep the transmission of the virus under control,” he said in a television announcement.

The mandatory measures should expire at the end of March. The block will be lifted on April 12th.
Argentina has 820 confirmed cases and 20 deaths from COVID-19.

The KCDC said the new cases marked the 18th day in a row that new infections had about 100 or fewer additional cases.

Ken Shimura, one of Japan’s best-known comedians, died of COVID-19 in a Tokyo hospital, according to the NHK public broadcaster.

He was 70 years old. Many fans used social media to pay tribute.

Japanese comedian Ken Shimura dies after being infected with the corona virus. Http://t.co/epcnM9gnkk

The famous comedian Ken Shimura died after being infected with the corona virus. This is a well-known case for the Japanese as for the American Tom Hanks – only Hanks recovered 😕 https://t.co/UU57nB3LV1

It’s hard to overestimate the importance of Ken Shimura to someone who grew up with Japanese television in the 80s and 90s.

The only advantage is that maybe more Japanese are now taking the corona virus more seriously.

According to a report by The Associated Press (AP), more than 1,000 people in New York State have died from the outbreak of the coronavirus.

New York City announced on Sunday evening that the death toll had increased to 776. The total number of deaths across the country is expected to be released on Monday. As of Sunday morning, however, at least 250 more deaths outside the city were recorded, at least 1,026, said AP.

The number of COVID-19 infections in China continues to decrease. Health authorities in Beijing reported 31 new cases at the end of Sunday.

The figure shows a locally transmitted infection and marks a decrease compared to the 45 cases reported the day before. There were no new cases at headquarters for a sixth day in a row Hubei Province, where the coronavirus outbreak was first detected in December last year.

Trump is pounding China over Hong Kong, China answers with: What about Minneapolis?