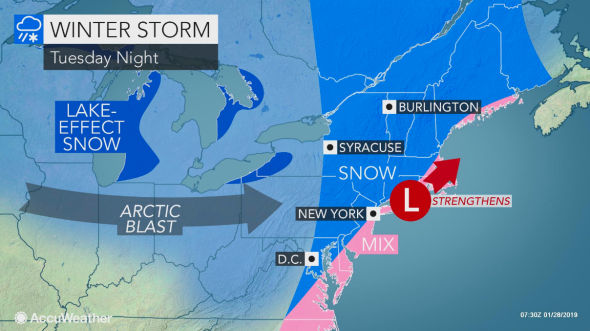 A winter storm expected to hit New Jersey on Tuesday afternoon could drop 3 to 6 inches of snow for areas north of the I-78, while the rest of the state increases 1 to 3 inches before dangerously cold temperatures and wind chill persist of the week.

National Weather Service's latest forecast update on Monday shows more widespread snow totals of at least one inch. Only the southern Jersey Shore is likely to avoid accumulation, and the time of the storm could disrupt the commuter on Wednesday morning, especially in North Jersey.

Rainfall starts on Tuesday afternoon with a mix of rain and snow, before all the snow changes in the early evening along the Interstate 95 corridor, says the National Weather Service.

Higher snowfall will occur in northwestern areas such as Sussex, Warren, Morris, Western Passaic and Northern Hunterdon. While Morristown should end at about 3 to 4 inches, anyone heading a few miles north or west could end up with 4 to 6 inches of snow Wednesday morning when the storm settles.

Forecastors are demanding an inch at 2 inches for areas along the New Jersey Turnpike between Newark and Camden. Coastal areas such as Long Beach Island and South will receive less than an inch, as rain, mixed with snow, lowers precipitation.