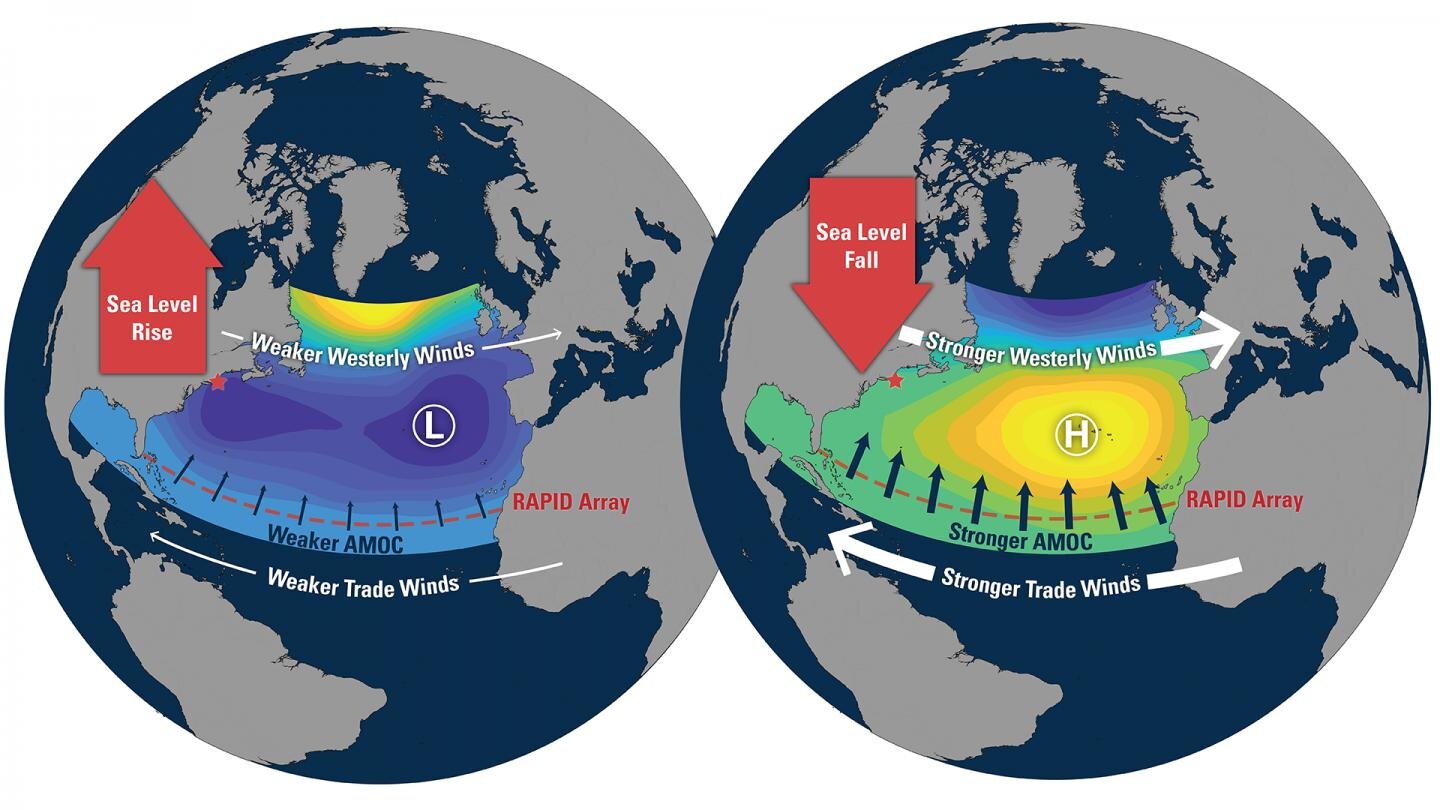 A new study by the Woods Hole Oceanographic Institution (WHOI) clarifies the impact of the main currents in the North Atlantic on the sea level in the Northeastern United States. The study, published June 13 in the journal Geophysical Research Letters examined both the strength of the Atlantic Meridional Overturning Circulation (AMOC) – a conveyor belt of currents, the warmer waters to the north as well as cooler waters moving south in the Atlantic – and historical sea level records in coastal New England.

"Scientists previously noted that sea levels in the northeastern US increase significantly when AMOC is stronger in a particular season or year, and as AMOC weakens, average sea level rises significantly," says Chris Piecuch, a physical oceanographer from WHOI and lead author on the paper. "For example, in the winter of 2009/2010, we saw the AMOC weaken by 30 percent, while sea levels in our region rose six inches, which does not sound like much, but half a foot." The months-long sea-level rise can have a serious impact on the coast. "

" However, it is unclear whether these two factors – the sea level on the coast and the AMOC – are linked by cause and effect, "adds Piecuch, although the study confirmed that the intensity of AMOC and the At the same time, it seems that neither of these two factors are directly influencing the other's behavior, but both appear to be controlled simultaneously by the variability of the main weather patterns over the North Atlantic, such as the North Atlantic Oscillation (NAO).

"Changes in NAO are changing both AMOC and sea levels separately," says Piecuch. "As the NAO changes, so does the trade winds blowing from the east across the tropical Atlantic. When the NAO is high, the trade winds are stronger than normal, which in turn strengthens the AMOC. The winds across New England are also stronger than usual, and together with the unusually high air pressure on the northeast coast, this lowers the average sea level – wind and pressure both fueling phenomena. "

According to Piecuch a study like this was not even possible until recently. In recent decades, satellite imagery has provided the scientists with a record of ocean surface motion but has failed to detect sub-surface currents. Since 2004, an international team of scientists has maintained a range of instruments spanning across the Atlantic between Florida and Morocco. The instruments, collectively referred to as RAPID arrays, contain a variety of sensors that measure currents, salinity and temperature. "RAPID does not solve the details of every single stream on the way, but it gives us the sum total of the ocean's behavior as the AMOC does," notes Piecuch.

These results are particularly important for residents along the northeastern US coast, he adds. Existing climate models suggest that sea levels will rise globally in the next century due to climate change, but sea level rise on the New England coast will be above the global average. Scientists have traditionally assumed that future sea-level rise in the northeastern US is inextricably linked to a weakening of AMOC, which is also predicting climate models. However, given the study's findings, this assumption may need to be reviewed, says Piecuch. "The problem right now is that we can only work with AMOC data from the age of 13. To get a better sense of how these two things are related in the long run, we need to wait a long time to provide observational reports," he says.

Quote :
No direct link between North Atlantic currents and sea levels along the New England coast (2019, 14 June)
retrieved on 15 June 2019
from https://phys.org/news/2019-06-link-north-atlantic-currents-sea.html