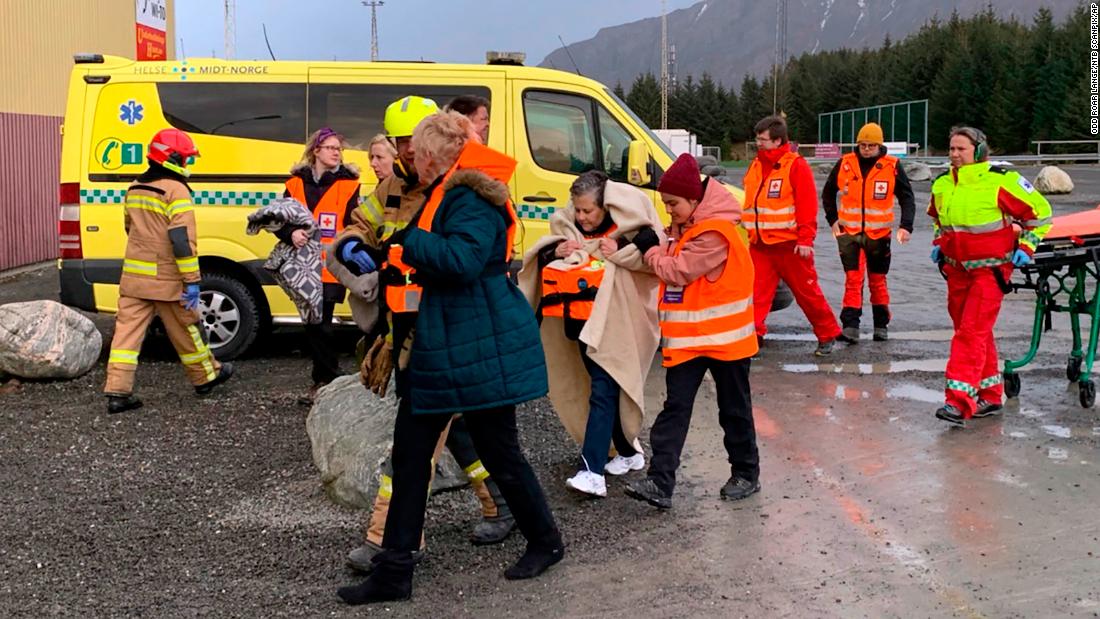 Three of the four engines of the Viking Sky ship are running, and the ship has restarted and is moving slowly, said spokesman Per Fjeld from the Joint Rescue Center for Southern Norway. Rescue teams are still evacuating passengers and crew – even if tug boats try to pull them ashore – but there's no estimate of how long it will take to get them all out, he said.

The Viking Sky ship sent a distress signal on Saturday due to engine problems in bad weather, the Joint Rescue Center for Southern Norway said. It was in rough seas in the Hustadvika area on the west coast of Norway and rescuers have waves of up to 6-8 meters (about 19-26 feet).

Helicopters flew up passengers and crew members from Saturday to Saturday, and the trial lasted until Sunday. On Saturday night, about 1

15 passengers were rescued, and at least eight people were slightly injured, said spokeswoman Borghild Eldoen from the Joint Rescue Center for Southern Norway.

It is not clear if passengers were injured on the ship.

"Furniture would slip through the room, slide back and with that came the people and the glass, it was a very dangerous situation, frankly," said Terbruegen.

He said they had left the ship quickly and had little time to fear.

"We tried to stay deeper in the center of the ship just because it was a recipe for seasickness, and then they called the collection stations and within half an hour we found out we were getting out of here we were blown towards the rocks f exciting, I think, but fortunately that was not our destiny. "

The passenger Beth Clark told Dagbladet that he was being taken away from the ship.

"The guy came down from the helicopter – one of the coast guards – tore off my belt said it # and shot me about 100 feet in the air and on the helicopter," she said.

"I was more scared to hit the blades, I did not look down and that was my big fear, everyone had different fears, that was mine, but they were great, I mean, once they pulled you up he grabbed me and pulled me in like a sack of potatoes and robbed me behind the helicopter. "

Passenger Alexus Sheppard from Northern California said on Saturday she said I've been waiting almost six hours for the evacuation. Most people were pretty quiet, she said, and they were served food and water.

Another passenger, Ryan Flynn, described the desperate wait for rescue.

"It's about 3:15 am local time in Norway and many of us are still stranded in the Viking sky," he tweeted. "It is abysmal, as the seas are still very strong." Winds The ship continues to peck and roll. "The captain hopes that the wind and sea are calm enough to bring a ship into port.

The rescuers are trying to make sure that the ship stays safe and does not drift, the authorities said.

The authorities initially sent five helicopters and a series of ships to evacuate the passengers, forcing them to divert some resources as one nearby […] The Norwegian police said evacuees were being processed ashore at the Brynhallen indoor sports stadium.

The passengers then became hotels in Molde and Kristiansund in which evacuated centers were set up, they said

In a statement on its website, Viking Ocean Cruises said that the ship "suffered engine damage" off the coast of Norway nearby from Molde at 14 o'clock local time Saturday.

"Our top priority was the safety and well-being of our passengers and our crew, and in close cooperation with the Norwegian Coast Guard, the captain decided to evict all guests by helicopter," it said

The Viking Sky vessel, owned by Viking Ocean Cruises, was built in 2017 and can accommodate 930 guests according to the Wiking Company's website
According to the Marine Traffic website, the ship was from Tromso on the way to Stavanger. Viking said it had canceled its next sailing trip – Scandinavia and the Kiel Canal – scheduled for departure on March 27th.

Zahra Ullah, Theresa Waldrop and Sheena Jones of CNN contributed to this report.