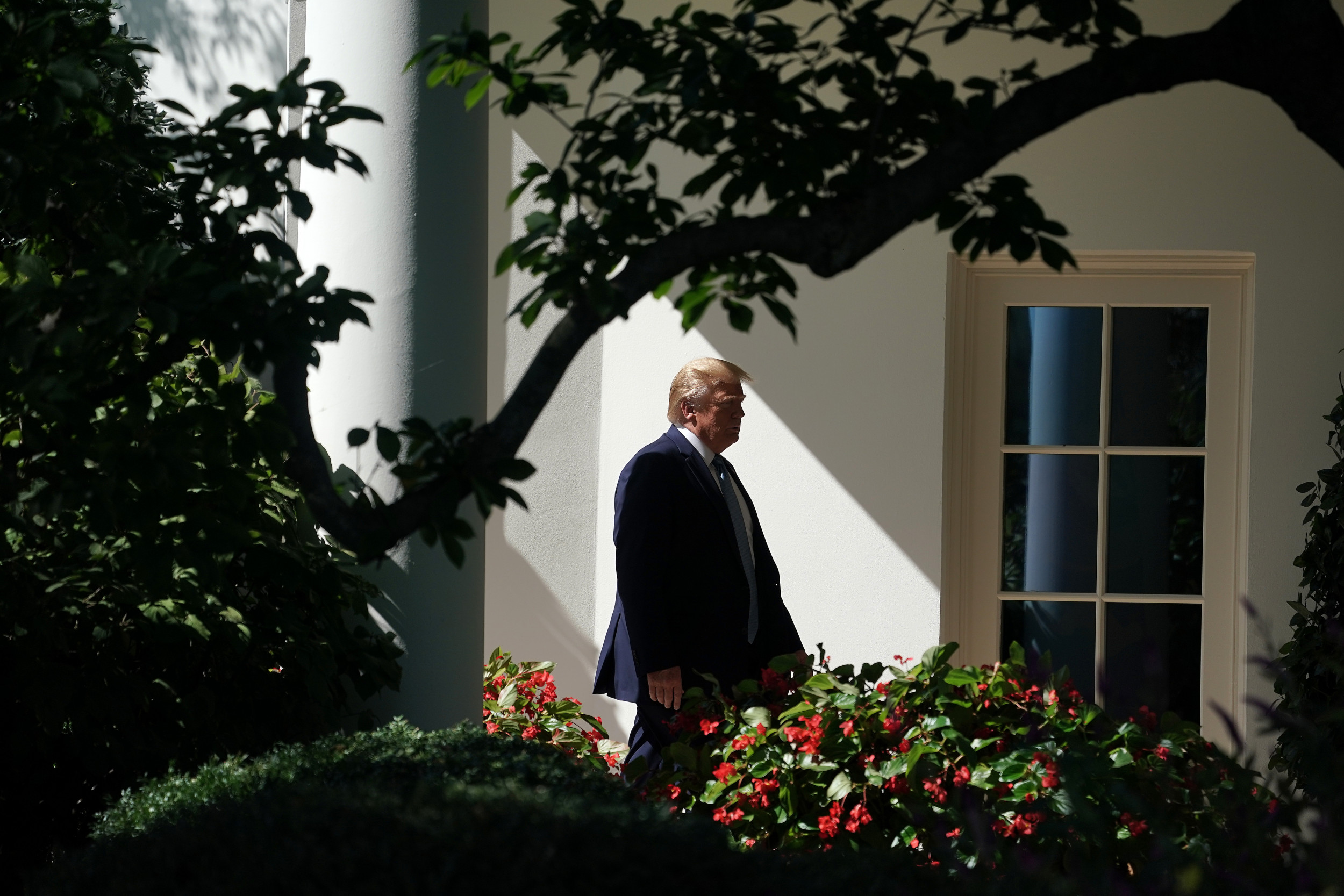 Donald Trump was "rolled" by Turkish President Recep Tayyip Erdogan, a source of the National Security Council with direct knowledge of the discussions. Newsweek

In a scheduled phone Trump said on Sunday afternoon between President Trump and President Erdogan he would pull the US forces out of northern Syria. The call was scheduled after Turkey announced its intention to invade Syria, and hours after Erdogan stepped up its army corps on the Syrian-Turkish border and issued its biggest threat to launch a military attack, the National Security Council official said. Newsweek spoke on the condition of anonymity.

The US withdrawal pulls the hands of the Islamic state group Damascus and Moscow, and the announcement left Trump's own Ministry of Defense "completely stunned." Turkey, like the United States, wants a regime change in Syria. Russia and Iran support the Assad regime.

"President Trump has definitely been negotiated and has only advocated the withdrawal of the troop to make it look like we're getting something – but we're getting nothing," the National Security Council source told Newsweek. "US national security has been in a state of heightened danger for decades because the president has no backbone, and that's the end result."

Newsweek granted the National Security Council official anonymity because they were not authorized to discuss the matter publicly. The source said it would not be surprising to see a Turkish invasion in the next 24 to 96 hours.

Turkey has long regarded the Kurdish militia in Syria as a terrorist uprising, although the United States is providing military and financial aid to Turkey's group fighting ISIS, the militant group of the Islamic State. A fight with the far superior Turkish military, an ally of NATO, could push the Kurds into the arms of Bashar al-Assad, the Syrian dictator whom Washington wants to oust, and in a broader sense to an alliance with Russia and Iran, two US rival forces in Syria.

The White House said late on Sunday evening that Turkey would soon invade northern Syria, but both the Department of Defense and Trump on Twitter informed Turkey that they did not support a Turkish operation in northern Syria.

"As I have already stated in detail, and just to repeat it once again, if Turkey does something that I consider taboo in my great and incomparable wisdom, I will completely destroy and annihilate the Turkish economy. # 39; "said Trump on Twitter on Monday." They need to watch over the captured ISIS fighters and families with Europe and others … it's time that others in the region, some of great wealth, see her protect their own territory. "

According to NSC official Trump, who knew the call first-hand, no Turkish military operation advocated against the Kurdish forces, but did not threaten economic sanctions if Turkey decided to engage in offensive operations. [19659006TheWhiteHousePressSecretaryStephanieGrishamsaid:"TheUnitedStatesArmedForceswillnotsupportorbeinvolvedintheoperationandtheSUnitedStatesforcesthathavedefeatedISIS's"caliphate"territorywillnolongerbeincloseproximity"[19659005] The New York Times reported Monday that about 100 to 150 American forces would be deployed from northern Syria but not completely out of the country. Newsweek confirmed the Times report, but the National Security Council official said the number was closer to 230 service members, including US special forces and reconnaissance units.

The Times also reported witnesses watching withdrawal of US forces from two observation posts in Tel Abyad and Ein Eissa in northeastern Syria. Newsweek confirmed this on Monday – a senior Defense Department official said US forces were about 90 percent complete with the retreat at the time of publication.

One of the major problems in the telephone conversation between the two world leaders concerned The approximately 2,000 militant prisoners of the Islamic state, who are held by the Kurdish-dominated Syrian defense forces in northeastern Syria and who financially supports the US military.

Trump told Erdogan that he did not want anything to do with ISIS prisoners, although the United States currently does not want to detain Islamic state prisoners in Syria. The Syrian armed forces control the custody of the prisoners.

Erdogan said that Turkey would take custody of the militant ISIS prisoners, as the White House and National Security Council officials talk Newsweek for this story.

"The ISIS prisoners, some of them, will eventually be released from chaos and stay in the area or go elsewhere to rejoin the fight," the National Security Council official speculated.

Der Sonntag's White House statement also expressed Trump's long-lasting disappointment over how other NATO-allied countries had dealt with imprisoned militants of the Islamic State Group. The statement highlighted "France, Germany and other European nations" for refusing to take back their citizens who joined the militant group of the Islamic State.

Army General Mark A. Milley, Trump's new chairman of the Joint Chiefs of Staff, is scheduled to meet with the chiefs this morning to discuss the matter, National Security Council source said.

The National Security Council official said they could not speak about what Trump's admirals and generals could plan, but said they would not expect the usual standards, as the Department of Defense obeys orders with or without previous knowledge.

Would the United States have refused to quit the Turkish war? In this sense, US options would not only jeopardize a possible conflict between national military forces, but would also have put pressure on the Turkish economy, the National Security Council official said.

The United States, however, decided not to persist its reason to protect the Kurdish armed forces from Turkish air strikes as part of Trump's "America First" policy and its historical view that war is bad for business, officials said al.

On Sunday, Erdogan reinforced his army units on the Syrian-Turkish border after he issued his biggest threat to send Turkish troops across the border and into the "buffer zone" between the Tigris and Euphrates rivers.

] The buffer zone – sometimes referred to as the Peace Corridor – was set up to prevent another Turkish invasion of northern Syria. The United States had been working to establish an adequate demilitarized zone before Trump advocated Turkey's military plans.

If Trump had not withdrawn the US forces, the National Security Council official told Newsweek The United States The states could have further refined the buffer zone on the Syrian-Turkish border.

"To be honest, it would be better for the United States to support a Kurdish nation in Turkey, Syria and Iraq," said the National Security Council official. "It would be another Israel in the region."

The current foreign policy debacle prompted Trump's former Secretary of Defense James Mattis to resign after Trump decided in December 2018 to abruptly withdraw the American forces from Syria, the last of the Generals to have been touted as "adults" in the administration – and An outspoken opponent of a Syrian withdrawal was the decision to withdraw US troops from Syria, as Pentagon officials feared the withdrawal could trigger a resurgence of ISIS, similar to the growing influence and territory of the Taliban in Afghanistan.

Government officials told Newsweek Trump's sudden withdrawal order could undercut US strategic alliances with regional allies; The liberation of Russia and Iran from the restoration of a full military presence and a solid base in the Mediterranean; A full withdrawal could possibly also give a valuable regional position to US forces that threaten US interests in the region, including the interests of their allies, like Israel and, to some extent, Jordan.

"When the bigger guy [United States] steps aside on the playground, they'll get [Turkey] the smaller guy to beat [Syrian Defense Forces] and it's not about the US being the world police," said the source of the National Security Council Newsweek .

"We tell the world, we will use it and then throw it away," the official added. "It's not like they have no television in Asia, Africa and South America."