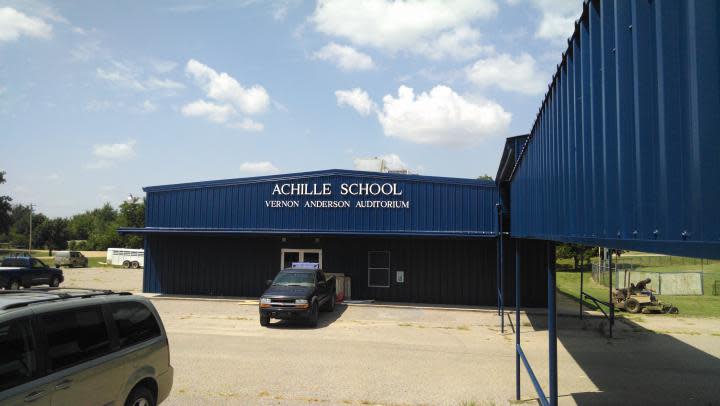 A South Oklahoma school district was forced to close for two days after parents used a Facebook group to threaten violence against a seventh grade transgender student.

Superintendent Rick Beene joined Achille Public Schools on Monday and Tuesday after parents published claims on a Facebook group "Achille ISD Parents Group," which looked at the student who identified herself as a girl, over the booths in the girls' bathroom.

"Heads up parents 5th through 7th grade," parent Jamie Crenshaw said in a now deleted post. "The transgender is already using the girls' bathroom, we've been told that the school has done everything to get his own toilet, but he's still using the girls … REALLY … Looks like it's going to be a long one Year. "

Beene would not confirm if the alleged bath incident occurred.

The post triggered reactions from other adults who called the 7th grade student "this thing". and "half-baked grub". One parent repeatedly referred to the student as "he" and suggested a "good sharp knife" to stop the student. Another parent said her child should "whip his butt until he gets to school."

Supporters of LGBTQ rights planned a demonstration at the school and police Believing that it is safer to close the district – which has 400 students – because of the possibility of counter-demonstrators, says Beene.

The school will reopen Wednesday with police on campus.

Bryan County sheriff Johnny Christian says MPs could currently investigate the Facebook posts and charge fees. He says most of the answers came from parents outside the Achille area – some even from outside the state.

He says the transgender student's family has a protection order against the parent who commented on the use of a knife.

The main thing is that the kids feel safe, "says Christian," This is an unfortunate incident, we have an amazing county and we all take each other. "

For a long time, bathrooms have been a hotbed for LGBTQ rights – and have recently become a hot political issue as several states debated bills that discourage transgender people from using the bathroom of their gender identity: Transvestite teen Gavin Grimm's struggle to use the boy's bathroom in his Virginia school , gained national attention.

In January, a lawmaker of the Oklahoma state introduced a "bathroom bill" that had restricted the rights of transgender people to use the bathroom of their choice, but the bill never came to a vote. [19659014] Sara Cunningham, CEO of LGBTQ supports nonprofit, Free Mom Hugs, wrote a letter of support to the Tr students and condemned Facebook threats from their parents. Cunningham offered to train the staff and students at the school and offered guidance to the transgender student.

"We have seen the post of parents from your school district and are more than discouraged," Cunningham said in her letter. "But we've seen in our experience that so much hate and abuse is due to fear and ignorance, and the tragedy is that this level of emotional torture and adult threats of violence will undoubtedly lead to depression, mental illness, and suicidal thoughts. Please let us know how we can help you, time is enough to tell. "

Achille is a city of 492 inhabitants about 90 miles north of Dallas.

Beene says he has talked to several LGBTQ organizations that have been busy training their employees and planning to accept them.

Beene says that the controversy over the Facebook page, which is not officially affiliated with the school district, does not represent the school mentality towards LBGTQ students. He says that teachers and administrators work hard to make sure that students feel comfortable and that they are not threatened again.

"Our school administration takes the safety of the students seriously," says Beene. "Private discussions about social media do not represent our school and administration, and our school believes that everyone should receive safe and free education."