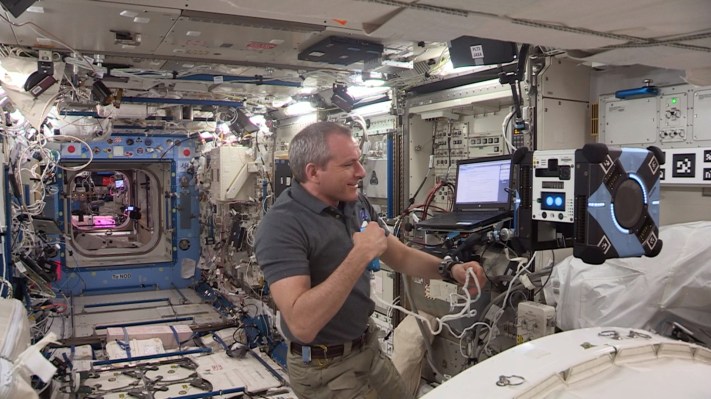 The free-floating counterpart to the Companion Cube developed by NASA has today taken its own first tentative "footsteps" in outer space, proving its ability to spin independently in the weightlessness of the International Space Station. The robot named "Bumble" and one of a series of astro robots that NASA has developed to work with astronauts on the ISS is the first to ever fly alone in space.

Bummel's first flight would not necessarily impress at an airshow, the robot basically took a foot forward and turned a little. But they are important basic maneuvers to make sure the robot's propulsion system is working and tuned properly. Ultimately, it is planned that they work autonomously and perform some basic maintenance and support experiments. Therefore, the operation must be done exactly as it is intended before the space can be freely shared with delicate human astronauts.

The Astrobee line is currently operational. Its members include three stand-alone robots, including Bumble, Honey (also already on the ISS) and Queen, who will be deployed to the next replenishment mission in July, if all goes according to plan. Each is equipped with cameras to document human experiments, and they can network to actually move devices. The robots can also dock at an escort station to load, and each one has a small arm to hold onto or hold on to.

The cubed one-foot bots were developed At NASA's Ames research facility, astronauts should be able to focus on things that only humans can handle – once they're fully operational – and there's plenty Doing experiments and research on the ISS.