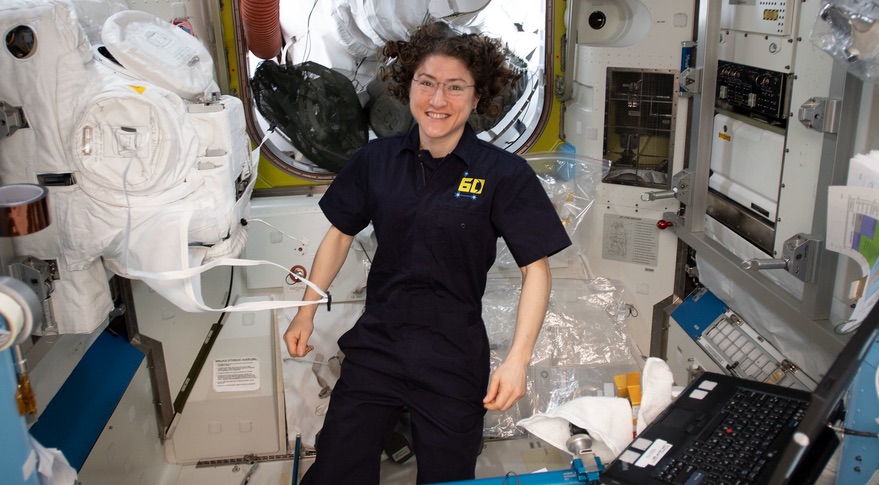 For me, there was no better place to celebrate the Women's Equalization Day than exactly where I am on the International Space Station, 250 miles above the Earth's surface.

On August 26, we recognized the passing of the 19th World War of Amendment to the US Constitution, the first step in strengthening women's voting rights. The Women's Equality Day reminds us of the visionary women who, unwavering, sought their dreams and paved the way for others to pursue ambitions and create future opportunities on earth and beyond. This year, I stand on the shoulders of these heroes when I think about what that day means from this point of view.

First of all, it impresses me to have the privilege of working and living aboard the space station and contributing to a program that brings not only benefits to all through exploration of borders, but also to a diverse and international team which, through its success, has demonstrated the power of inclusion and equality.

On board the station we conduct research in microgravity, which extends human capabilities. Whether it's developing technologies for 3D printing of human organs, studying diseases such as Parkinson's and multiple sclerosis, or learning to improve materials and industrial processes, our research exploits the lack of gravity outside of the earth while bringing benefits for the earth.

Our research, too This will benefit future space missions as we test new technologies for air purification and recirculation ̵

1; a key element for missions to the Moon and Mars. Other systems we test include advanced space suits for crewmembers who are making the next big leap on the moon – spacesuits suitable for astronauts of all sizes and shapes who dream to explore them.

Today, @Astro_Christina Logs 164 days in space – halfway to their record-breaking 328-day mission and on the same day as #WomensEqualityDay . Koch conducts hundreds of experiments paving the way for #Artemis missions to the Moon and Mars and improving life on Earth. pic.twitter.com/oOyHLBk9EF

This groundbreaking work is supported by a global partnership of 15 nations and five international space agencies, as well as a thriving commercial space industry. During my mission, I lived in space with colleagues from the US, Russia, Canada, Italy and the United Arab Emirates. I have not only worked with ground teams at NASA, but also with space centers in Europe, Russia and Japan. I will even see the arrival of commercially designed and built vehicles with crew on the space station.

The day of women's equality was something special for me as an American woman in space. It is an honor to work in a time at NASA where women engage in the same commitment that drove the electoral process to reach another historic milestone – to go to the Moon.

NASA recently launched the Artemis program to send the first woman and the next man to the lunar surface. Named after Apollo's twin sister, this program will bring people back to the moon by 2024 and build a sustainable presence there by 2028. The mission will continue the scientific exploration that began the historic Apollo mission more than 50 years ago, empowering people to travel to Mars and beyond. This time, we find ourselves at a time when mission contributions are as diverse as the people who dare to dream them.

My astronaut class was equally male and female, and women are strongly represented in the talented astronaut corps and NASA's mission control centers. During my time aboard the space station, two of my NASA astronauts are women, Anne McClain and Jessica Meir. Last year we will have three different pairs of female astronauts in space. That's the same number of female couples as in the last 18 years of human presence on the space station.

Today marks half of my extended mission on @Space_Station and happens to be ] #WomensEqualityDay . Today, I think about how the women who fought for electoral rights inspired me to work hard every day to improve the world in a big and small way. pic.twitter.com/Upd1wCUV7m

My second reflection on what Women Equality Day means to me is more personal. Yesterday I have half of my mission behind me and am on the way to the longest time that a woman has spent in space. My nearly eleven-month stay here will help scientists better understand how they can support human life for space missions, and my time on board will drive important research into how this environment affects the female body and NASA and their astronauts are preparing to carry out missions of greater duration and distance. A one-way trip to the moon is about 385,000 kilometers long and takes about three days. This is an essential step in testing new technologies and systems for more demanding space travel. One day astronauts will travel millions of miles to Mars and back – a mission that could take two to three years.

The Apollo generation has laid the foundation. But today we are part of a new generation – the Artemis generation – ready to lead explorations into the unknown. I hope all young people who dream of exploring the borders can imagine themselves in space. To achieve courageous goals, we need every intrepid explorer who is ready to take on the challenge.

When we think about the suffrage movement, let's celebrate the things we have achieved together on Earth and all the things we can achieve – from the Moon to Mars and beyond.

Christina Koch is a NASA astronaut living aboard the International Space Station.