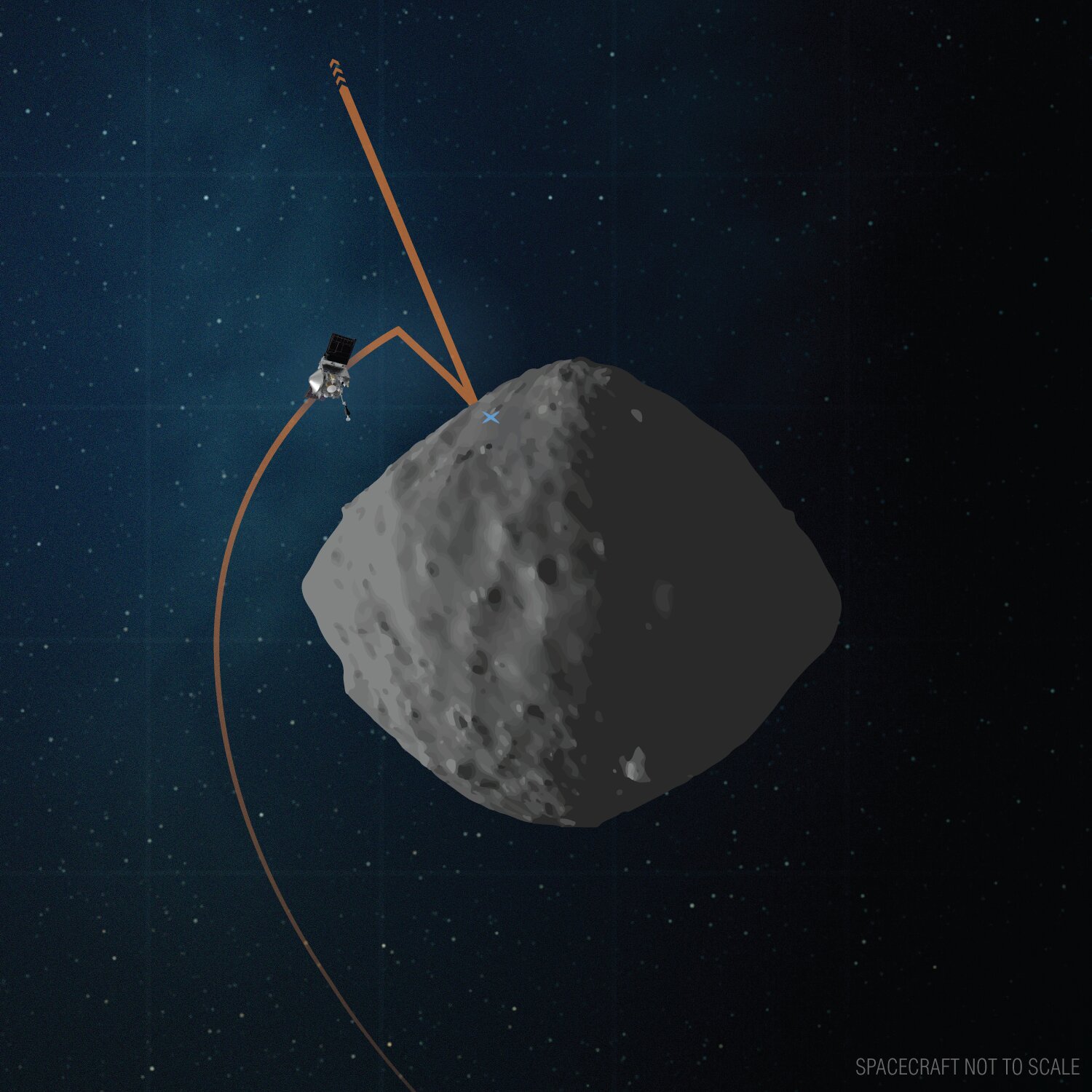 NASA’s first asteroid sampling spacecraft is making final preparations to collect a sample from the surface of the asteroid Bennu. Next week, the OSIRIS REx mission will do a second sample of its touchdown sequence and practice sampling activities one last time before landing on Bennu this fall.

On August 11, the mission will conduct its “matchpoint” sampling – the second practice run of the TAG touch-and-go sampling event. The rehearsal is similar to the “Checkpoint” rehearsal on April 14, when the first two maneuvers of the descent were practiced. This time around, however, the spaceship will add a third maneuver, called Matchpoint Burn, and fly even closer to the Nightingale rehearsal location. Reach a height of around 40 m – before you withdraw from the asteroid.

This second rehearsal is the first time that the spaceship performs the matchpoint maneuver and then flies with Bennu’s rotation. The rehearsal also gives the team an opportunity to familiarize themselves with the spacecraft’s navigation through all descent maneuvers while checking whether the spacecraft’s imaging, navigation, and distance systems function as expected during the event.

During the descent, the spaceship fires its engines three times in a row to reach the surface of the asteroid. The spaceship will travel at an average speed of approximately 0.3 km / h during the approximately four-hour excursion. The matchpoint test begins with OSIRIS-REx firing its engines to leave its 870 m safe orbit. The spaceship then extends its robotic sampling arm – the Touch-and-Go Sample Acquisition Mechanism (TAGSAM) – from its folded, parked position to the sample collection configuration. Immediately afterwards, the spaceship turns to collect navigation images for the NFT guidance system (Natural Feature Tracking). With NFT, OSIRIS-REx can autonomously navigate to Bennu’s surface by comparing an integrated image catalog with the real-time navigation images that were recorded during the descent. As the spacecraft approaches the surface, the NFT system updates the spacecraft’s predicted contact point based on the OSIRIS-REx’s position with respect to Bennu’s landmarks.

The spacecraft’s two solar panels then move into a “Y-wing” configuration that securely positions them upward and away from the surface of the asteroid. This configuration also places the spacecraft’s center of gravity directly above the TAGSAM collection head, which is the only part of the spacecraft that will come into contact with Bennu’s surface during the sampling event.

When OSIRIS-REx reaches a height of approx. 125 m, it carries out the checkpoint burn and falls steeper for another eight minutes onto Bennu’s surface. About 50 m above the asteroid, the spaceship fires its engines a third time for the matchpoint combustion. This maneuver slows the spacecraft’s rate of descent and adjusts its trajectory to Bennus’ rotation as the spacecraft makes final corrections to target the landing point. OSIRIS-REx will continue to capture images of Bennu’s landmarks for the NFT system to update the spacecraft’s trajectory for an additional three minutes of descent. This brings OSIRIS-REx to its destination, about 40 m from Bennu – closer than ever to the asteroid. After completing the rehearsal, the spaceship burns back, returns its solar panels to their original position and configures the TAGSAM arm back into the parked position.

During the rehearsal, the one-way light time for signal transmission between the earth and the spaceship is approximately 16 minutes, which prevents live control of flight activities from the ground. Before the rehearsal begins, the OSIRIS-REx team links all commands of the event with the spaceship so that OSIRIS-REx can autonomously execute the rehearsal sequence after the GO command has been issued. During the event, the low gain antenna of the spacecraft is the only antenna that points to earth and transmits data at a very slow rate of 40 bits per second. While the OSIRIS-REx team can monitor the vital functions of the spacecraft, the images and scientific data collected during the event are only linked after the rehearsal is complete. The team will experience these circumstances during the actual TAG event in October.

After the matchpoint trial, the OSIRIS-REx team reviews the performance of the flight system during descent, including the fact that matchpoint combustion has accurately adjusted the spacecraft’s descent path for touchdown on Bennu. Once the mission team determines that OSIRIS-REx is working as expected, it will command the spacecraft to return to its safe orbit around Bennu.

The mission team has been preparing for the matchpoint trial over the past few months and maximizing remote working as part of its COVID-19 response. On the day of the rehearsal, a limited number of staff will monitor the spacecraft from Lockheed Martin Space and take appropriate security precautions while the rest of the team performs its duties remotely. The mission implemented a similar protocol during the April checkpoint rehearsal.

On October 20, the spaceship will travel to the surface of the asteroid on its first sampling attempt. During this event, the OSIRIS-REx sampling mechanism contacts Bennu’s surface for approximately five seconds, fires a charge of pressurized nitrogen to disrupt the surface, and collects a sample before the spacecraft retreats. The spaceship is scheduled to return the sample to Earth on September 24, 2023.

Quote: OSIRIS-REx is a sample removed from touching the asteroid Bennu (2020, August 6), retrieved on August 7, 2020 from https://phys.org/news/2020-08-osiris-rex-rehearsal-asteroid- bennu.html