Over the coming “rocky weeks,” hospitals in Houston are preparing for more COVID-19 patients 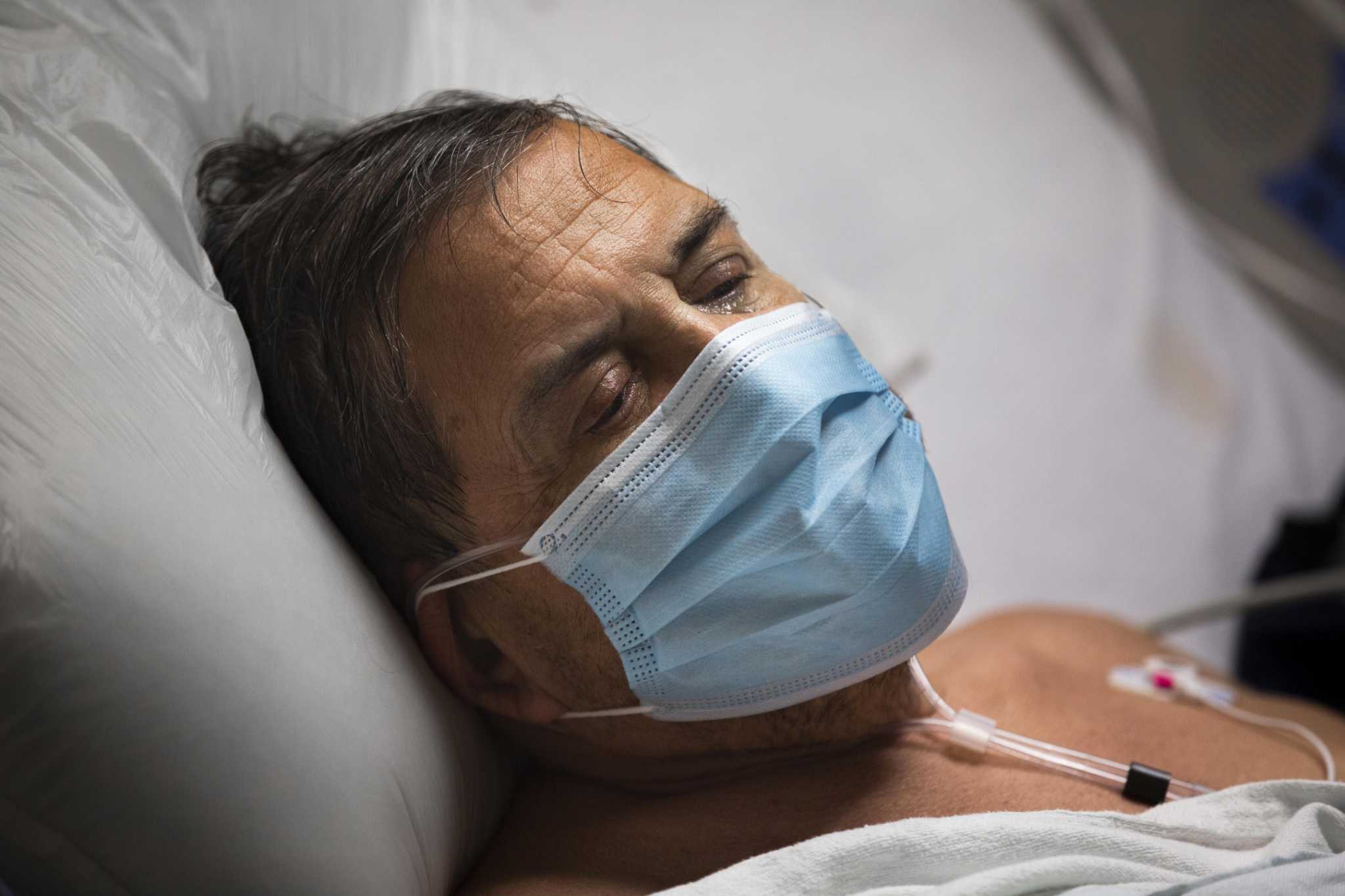 The woman with gray hair cramped on her hospital bed, her arms and legs bent as her chest rose and fell in a quick pump, pump, pump.

She lost a war against the novel corona virus that overtook her body. With the help of an oxygen mask on her face – the woman had rejected a ventilator – the staff at Memorial Hermann Hospital in the Texas Medical Center wanted to make her feel better in the past few days.

Two nurses lifted a blanket over the older woman’s shoulders after giving the strong pain reliever fentanyl. Her frizzy hair stuck out from under the fleece. Her breathing slowed within minutes.

Nurse Ivette Palomeque entered the quiet hall of the hospital̵

7;s COVID 19 intensive care unit and closed the sliding glass doors behind her. Around the horseshoe wing, 21 other patients filled every room.

Palomeque had just returned from New York, where she had volunteered at the severely affected Elmhurst Hospital in Queens. When she left Houston three months ago, the number of cases was low and most residents were instructed to stay at home. In less than a week, she found that she had left one disaster zone to find another.

“It’s hard to see because I know what’s coming,” she said. “This is demoralizing.”

While Memorial Hermann doctors and nurses say they are still prepared for the increase in cases, the beds in the intensive care unit at the hospital are almost full, and all Texas Medical Center facilities are working on a Phase 2 emergency plan to add additional ones use beds in overflow areas. With the plan, the total number of intensive care beds used throughout the medical center is 1,367, including 512 for COVID-19.

According to the medical center, another 840 intensive care beds are available as part of surge plans, and the conversion of beds can create more capacity.

Houston is not yet in a New York situation, the doctors agreed, and they hoped the country’s largest medical complex would not experience a health system breakdown.

Models predict that the disease will peak in mid to late July, almost two months after the cases started to increase with the reopening of the Texas economy and a busy Memorial Day weekend. Texas has become one of the worst places in the nation for the spread, and all eyes are on the state and Houston as leaders of health and government are desperately trying to slow the outbreak.

“It will take a couple of rocky weeks, but we’ll get through this,” said Dr. Luis Ostrosky, infectious disease expert at Memorial Hermann and UT Health. 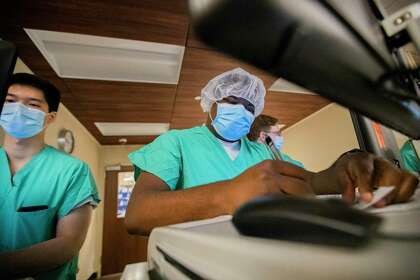 The risk for medical professionals

Dr. Pratik Doshi walked the halls of Floor 8 in the Sarofim Pavilion, a shiny glass building that happened to open in February before the pandemic landed in Houston.

He is the attending physician of the COVID 19 intensive care unit, which takes up half of the landing. In April, only 10 people occupied beds there, but he and his staff saw an increase in numbers: 16 in May, then 22 in June – capacity. The influx forced Memorial Hermann to overflow the patients to the medical intensive care unit on the other half of the floor and to take about three quarters of the 16 beds there on Thursday.

Doshi had just finished his rounds and went past every room that was separated from the hall by an all-glass wall.

A man made the sign of the cross on a bed, kissed his fist and pointed to the sky.

In another, a man leaned forward and made a call.

Other patients were immobile in the surrounding rooms.

Almost every bed was occupied by a patient with a breathing apparatus – at best oxygen support, at worst an extracorporeal membrane oxygenation machine. The device called ECMO takes over the lung function by circulating blood from the body into the body and back into the body, said Dr. Bela Patel, senior medical director for intensive care at Memorial Hermann.

The youngest patient in the unit was a woman who had just given birth to a baby, Doshi said. She was diagnosed with COVID-19 and she is critically ill.

The hospital is quiet despite the circumstances. A week of activity in the unit might fill an episode of the TV show “ER,” Doshi said. After months of working with the disease, they found a surgical pattern that worked for them, even though more and more patients were coming. On Friday, according to hospital data, the hospital was not quite full with 38 intensive care beds and 29 bunk beds for COVID-19. 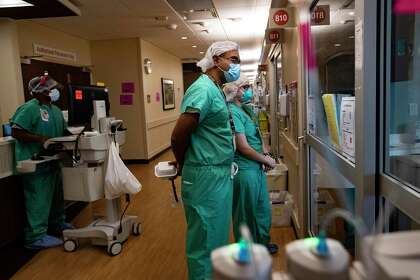 Nurse Robert Luckey said he and his staff had benefited from the fact that they had learned to deal with the coronavirus before the beds filled, which made it feel more stable than the reported numbers.

“I don’t think we can feel the hit with how many cases they report,” he said after he left a patient’s pressure-sealed room that contains the COVID-stained air. “It’s a way of life at this point.”

That doesn’t reduce the severity of the virus, which is approaching a dangerous level in Houston, hospital officials said. However, they repeatedly stated that they felt they had enough space to accommodate the growing number of cases at the Hermann Memorial. In an unused wing, 16 more beds are available on Monday, another 54 are also available.

Seeing that more care is needed in Houston can be frustrating because so much of the spread of coronavirus can be avoided, said Mechele Jenkins, nursing manager.

“Some people don’t necessarily think it’s important to wear a mask because they don’t see what we see every day because they may be a healthy person,” she said. “The person next to you may not be as healthy.”

Caring for a COVID-19 patient is still risky for medical professionals, but Doshi and his colleagues on the eighth floor have their new procedures scientifically. They try to limit the frequency of room visits and can provide patients with pumps that extend outside the door with liquid instead of the usual space at their bed.

They always wear masks and only put on their clothes and gloves when they enter the patient room. They put together to-do lists on the glass, and when a nurse or resident is inside, they can communicate by writing on the wall.

This type of precaution is almost a hesitation that is unknown to doctors.

“I never thought of myself when I looked after patients,” said Doshi. “It’s against everything we’ve ever done.”

“Angels that walk among us”

With an admission of COVID-19 patients that has become more regular, Doshi said he felt happy on Thursday when no one was waiting for an ICU spot in the emergency room. Employees are always looking for openings to move their patients – from the emergency room to the intensive care unit, from the general floor to an ICU overflow, or from the intensive care unit to the general floor.

Jorge Zambra was a person good enough to give up his intensive care bed after eight days in hospital on Wednesday evening. At the medical intermediate station on Thursday, he appeared to be tired, and breathing was difficult due to prolonged speech.

His diagnosis started with the worst headache of his life and led to hospitalization after a sudden drop in oxygen levels.

He had never lost hope, said the 70-year-old, although the experience was a “royal nightmare”.

“In a minute you think you’re feeling better and in the next couple of hours you start driving south again,” said Zambra. “They tell me that the worst is probably over, but the recovery will take a long time. Because I’m exhausted. “ 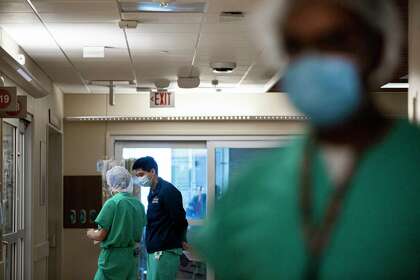 Like everyone who was hospitalized with COVID-19, Zambra’s stories pointed to the human toll of the disease – how he missed the interaction, how the disease temporarily robbed his personality.

Time passes slowly in the hospital. Zambra, a half-tired administrator at the UT Ministry of Health, frequently prays, texting his family and friends, and watching a Memorial Hermann channel on his TV that plays soothing music and shows beautiful landscapes.

After his release, Zambra can’t wait to continue his piano lessons and rehearse the next play by his Spanish theater group on obsessive-compulsive disorder.

He still has a long way to go, but his chest lifts with emotion if he only thinks of the gratitude he owes to the people in the hospital who saved his life.

“The thank you I feel is bigger than the Reliant Stadium,” he said. “I never knew there were so many angels among us.”