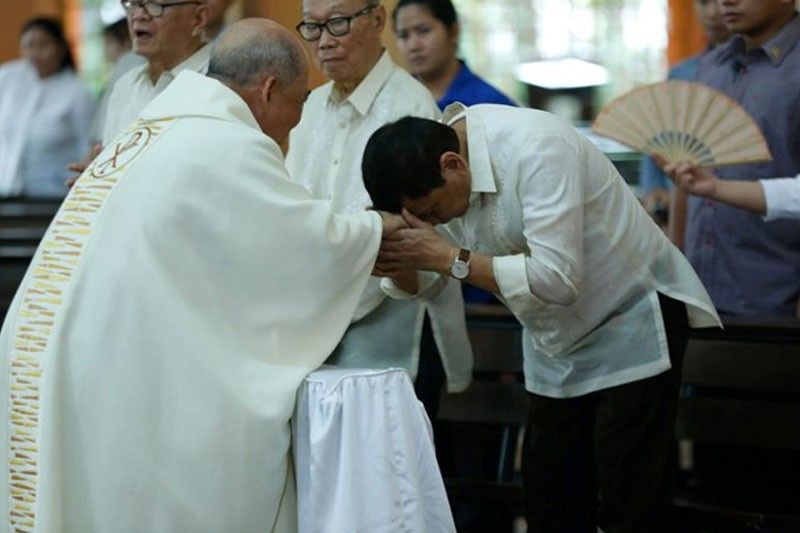 MANILA, Philippines – Malacañang has agreed to a personal meeting between President Duterte and the President of the Catholic Bishops' Conference of the Philippines (CBCP), Davao, Archbishop Romulo Valles, to put things back in the aftermath of the Chief Executive's tirades Catholic Church.

Presidential spokesman Harry Roque Jr., for his part, is optimistic about the outcome of his meeting with the Archbishop of the Apostolic Nuncio, Gabriele Giordano Caccia, last Friday evening, when he represented the President at the Pope's celebration at the papal nuncio's seat in Rome ,

Valles said the one-to-one interview between him and Duterte is being prepared, but there is still no fixed date.

"I understand that the one-to-one conversation is starting, but the timetable has to be set first, it's a matter of timing," said Valles The STAR .

Roque said his meeting with Caccia focused on how the Duterte administration and the Catholic hierarchy should work together for the people.

When I met the papal nuncio last night, it was agreed that both the state and the church should work for the good of the people. It was also agreed that President Duterte will conduct a personal dialogue with the President of the Catholic Bishops' Conference of the Philippines, "said Roque." The papal nuncio also welcomes further meetings with (the president), "said Roque, the director of the four-member panel to dialogue with religious leaders after being outraged at Duterte's remarks that God is stupid.

Malacañang officials are also considering the possibility of a separate meeting between Duterte and Caccia.

President Duterte had formed a committee to engage in dialogue with the various religious organizations in the country after being heavily criticized for his controversial "stupid god" commentary.

Already last Friday, Valles urged Catholic faithful to preserve and preserve faith, despite the recent controversy in the religious sector.

"I hope that we remain faithful, faith that gives our hearts peace and joy, faith based on the strong faith in Jesus who is always with us," said Valles in Visayan in his message the faithful in Davao

Valles' message came amidst the controversial "stupid god" remarks from Duterte, who questioned the Church's teaching on creation.

Earlier this week, Roque said the palace was examining an order made by former President Corazon Aquino, who set up the National Ecumenical Advisory Committee (NECCOM) to ensure that submissions from all religious denominations are forwarded to the administration.

Before the meeting on Friday Saycon said the group hoped to get understanding, tolerance and forgiveness from the Catholic Church.

Saycon met with the executive secretary of the Public Affairs Committee (PAC) of the CBCP. Jerome Secillano last Thursday to discuss the possible dialogue between Church leaders and government officials.

At the top of the government's agenda during the dialogue is to begin the healing process between the government and the church and clear up misunderstandings, Saycon said

He stated that Duterte is not known as diplomatically. Instead, he talks harshly.

Saycon said that 60-year-old Italian Archbishop Caccia had approved the dialogue between Malacanang officials and the CBCP.

Saycon and Abella attended the celebration of the Pope in the Apostolic Nunciature along Taft Avenue. Roque came too late.

Duterte was invited but did not attend the event when he was in Davao.

The celebration of the Pope is an annual event in the Apostolic Nunciature, attended by members of the clergy and some members of the

Among those present was also the former Manila Archbishop Gaudencio Cardinal Rosales.

Saycon said that the few with whom he spoke, including the nuncio, "are very open to the president's initiative to dialogue."

When Saycon was asked if the nuncio demanded anything, he said, " There was no request, in fact, there are no preconditions, and we are very happy and glad that the bishop has welcomed the President 's initiative. "

Blog, said Pabillo, as it was only recently, when the Duterte government announced that it would engage in dialogue with the CBCP, would be perceived by many as damage control by Malacañang.

"There is a call on the part of the government for dialogue with the churches, we welcome the dialogue, it should have been done long before the tirades, and then we can not call people who see this offer for dialogue as a damage control measure for the fierce protests against Duterte and his cohorts, it can only be offered as a face-saving strategy, "said Pabillo.

Sen. Aquilino Pimentel III. He advised the president to keep his favorite Bible verse and limit his thoughts to things unrelated to leading the country to his close friends and allies.

Pimentel said the president's personality, including the language he uses and his often mischievous behavior in public, is something everyone just needs to live with.

But that does not mean that he should not restrain himself from time to time, so as not to offend some areas of society. [1

9659002] The President has said many controversial issues in his two years in office, but the last one, where he called God "stupid" and then spoke of having his own God, drew a lot of anti-Semitic force, especially from members of the Catholics Believe. With Evelyn Macairan, Marvin Sy, Edith Regalado