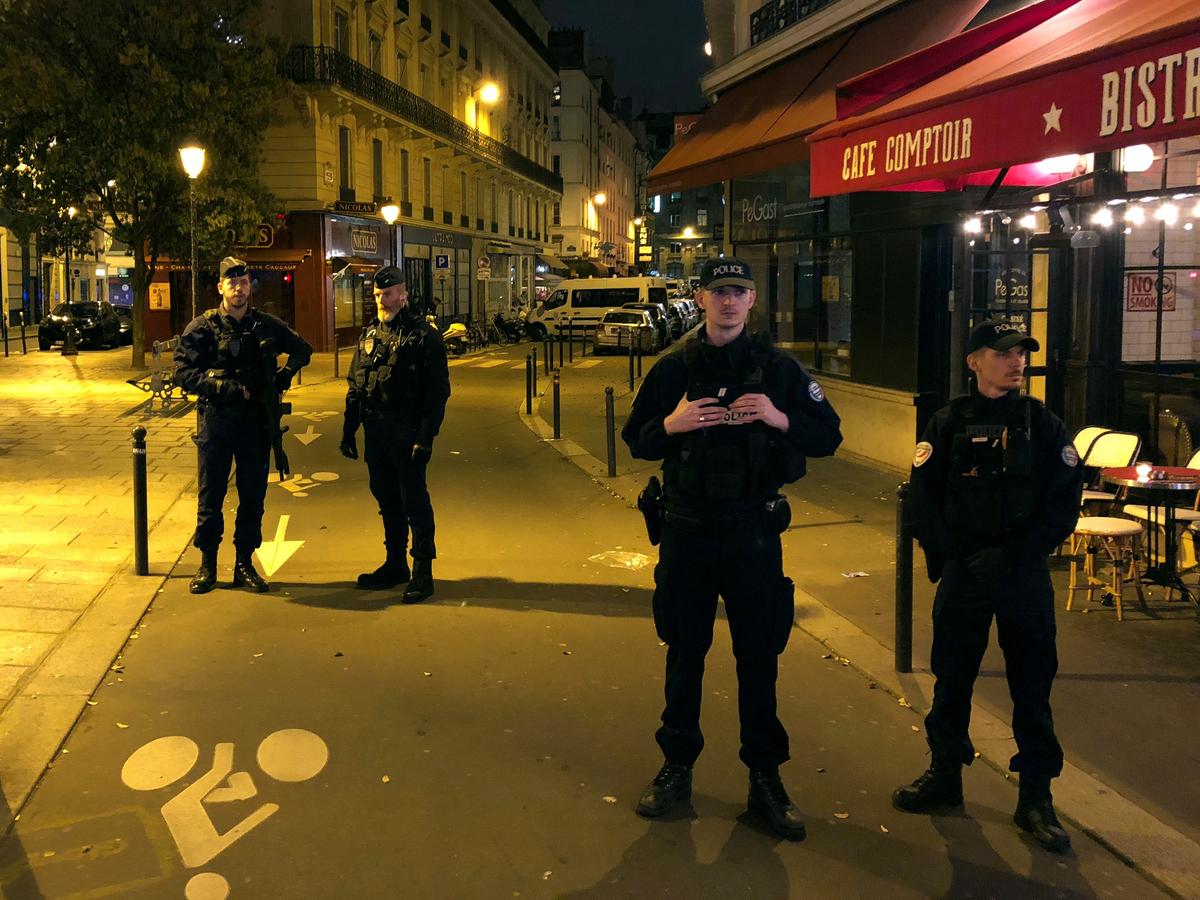 PARIS (Reuters) – Police searched a Chechen-born Frenchman on Sunday who killed a man in a knife attack in Paris while interrogating a 21-year-old's parents and friend about a potential security threat.

The attacker shouted "Allahu Akbar" (God is the Greatest) when he started his brutal rampage on Saturday. He fatally killed a 29-year-old man and wounded four others, including a Chinese and a Luxembourger, before the police shot him dead.

A forensic source called attacker Khamzat A, without giving his full name, to BFM TV and other French media, said Azimov.

The attack took place in the bustling Opera Quarter, known for its many restaurants, cafés and the Opera Garnier.

Since 2016, the attacker had been on an anti-terror watchlist of suspected radicals who could pose a threat to national security, government spokesman Benjamin Griveaux said.

The stabbing once again exposed the difficulty of European intelligence services in keeping an eye on alleged extremists and countering the threat of domestic militants and foreign jihadists.

France has participated in a US-led coalition against the Islamic State in Iraq and Syria and intervened in Mali to repress an Islamist rebellion in the West African state.

His overseas military interventions have exposed him to attacks by militant Islamists in his own country.

The Islamic State took responsibility for the attack on Saturday, but provided no evidence. Griveaux said the claim had not been fully authenticated.

In a video released by the Islamic State's Amaq News Agency, according to the SITE news monitoring group, a young man described the attacker as swearing allegiance to the leader of the Islamic State, Abu Bakr al-Baghdadi.

In French, his face largely obscured by a black hood and scarf, he said "infidels" fighting Islamic State were to blame. "You started killing Muslims," ​​he said.

It was not immediately possible to confirm the identity of the man in the video.

The attacker became French when his mother was granted citizenship in 2010, Griveaux said in a joint interview with broadcasters LCI and RTL and the newspaper Le Figaro.

He rejected the criticisms made by opponents of President Emmanuel Macron that the government was not doing enough to curb such attacks and said, "Zero risk does not exist."

Judicial sources said the attacker's parents and a friend of his were interviewed. The friend, arrested in the East French city of Strasbourg, was born in 1997, it said.

BFM TV said the attacker lived in Strasbourg for a long time before moving to Paris last year.

A local elected official told Reuters that about 40 to 50 Chechen families lived in this area of ​​Strasbourg, not mingling much with other people.

"I have sounded the alarm since 2008/2009, which is a fertile ground for radicalization," said Eric Elkouby, a socialist, about the area he said was impoverished and neglected by the authorities.

"We hid under the table"

Macron said France would "not give an inch to the enemies of freedom" and praised the police for "neutralization" the terrorist. "

In Washington, the White House issued a statement on Sunday condemning the attack and offering thoughts and prayers to the victims and their families.

" We stand in solidarity with the French people and their government against this evil act of terrorism and provide all the necessary support, "says the White House statement.

He was then shot dead by the officers.

" It was scary, "said Emma Klibbe, a 32-year-old outlaw Tralierin, who was waiting to come to a nearby restaurant and see a man pass by who had been wounded in the attack.

"We heard someone screaming, and then a woman screamed," rush in! "We ran in and hid under the table," said Klibbe, who teaches English in Paris.

The four injured were out of danger, Interior Minister Gerard Collomb told reporters.

A picture seen by Reuters showed a young man with a bare chest and beard lying in black sweatpants on the floor and supported by emergency services. A source said he was the attacker.

"We heard rifle fire, two rifle shots," said waitress Sarah Gousse. "The street was filled only with police and firefighters and they tried to revive him (the attacker)."

In a similar incident in October, a man stabbed two young women in the port city of Marseille before he was shot dead by soldiers.

The deadliest attack that has struck France in the past three years occurred in November 2015 in Paris, when 130 people were killed.

The French police secures a street after a man killed a passerby in a knife attack in the heart of Paris and injured four others before he was shot dead by the police, according to the French authorities in Paris on 12 May 2018. REUTERS / Lucien Libert