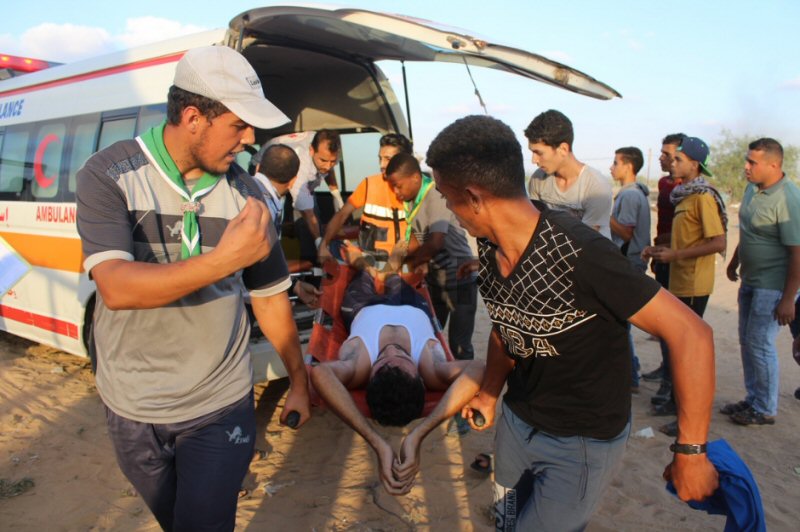 Israeli forces continued their systematic crimes in the Occupied Palestinian Territories (oPt) for the week of 19-25 July 2018.

7 Week after week saw peaceful demonstrations along the eastern and northern border strip in the Gaza Strip. During the reporting period in the Gaza Strip, Israeli forces killed one Palestinian civilian while two civilians died from their previous wounds. In addition, Israeli forces injured 124 others, including 30 children, 4 women, a male journalist and a journalist. 3 of these wounded suffered severe wounds. In the West Bank, Israeli forces killed one Palestinian civilian and injured five others, including two children.

Return and Smash Siege March in Khuzaâ € ™ ah Village. Karam's wounds were described as critical and he was then admitted to intensive care and stayed there until his death. On July 24, 2018, medical sources at the Indonesian hospital in Jabalia in the northern Gaza Strip reported the death of Majd Suhail Mohammed & # 39; Aqeel, 26, from al-Sekkah Street in Jabalia, who sustained injuries sustained on May 14 succumbed in 2018, during his participation in the March of Return and Breaking Siege.

As part of air strikes, Israeli warplanes launched and claimed 23 air strikes against a group of Palestinian civilians burned incendiary bombs; Military sites of Palestinian resistance groups; and empty countries. The Israeli fighter planes, which fired 46 missiles, wounded 25 civilians, including 7 children and 3 women. In addition, 7 Palestinian officers were killed in the Ministry of Interior of the Gaza Strip.

An air raid led to the death of 54 sheep, 60 pigeons and 160 chickens and damaged livestock tools on a farm owned by Majed al-Shaiekh. The farm mentioned above is located in the eastern border, adjacent to al-Hajjah Handah Road, east of al-Shuja & # 39; iyia, east of Gaza City. In addition, al-Nakheel Resort, west of the al-Buriej Camp in the center of the Gaza Strip, suffered partial damage after being attacked.

In the West Bank on July 23, 2018, Israeli forces killed in a new crime of excessive use of lethal force against Palestinian civilians Arkan Mizher (15) and wounded another in the al-Dahish refugee camp south of Bethlehem Arkan was having a living bullet who entered his heart and left his back.

In addition to the above-mentioned wounded, Israeli forces injured 5 civilians, including 2 children

During the period under review Israeli forces led at least 64 military incursions into Palestinian communities in the West Bank and 6 similar in Jerusalem and its suburbs. During these attacks, Israeli forces arrested at least 46 Palestinians, including one child and one woman, in the West Bank. Meanwhile, 13 other civilians, including 2 children and 2 women, have been arrested in Jerusalem and its suburbs.

Following the demolition of homes and civilian facilities, on 19 July 2018 Israeli forces ordered the families Shawamrah and Abu Irmilah allegedly demolished 4 apartments in al-Ashqariyia neighborhood in Beit Haninah village, north of occupied East Jerusalem, to support the Israeli Supreme Court. The Israeli Supreme Court claimed ownership of the land on which the dwellings were built has been owned by Israeli settlers since 1974. The two families built the above apartments in 2000 on an area of ​​1.5 dunums. Al-Shawamrah and Abu Irmilah families purchased the 3-Dunum property from a Jerusalem family before turning to the courts to protect the property and the property built thereon. The two families destroyed their homes costing NIS 30,000 and built a tent that accommodated 30 members, half of whom were children.

On July 25, 2018, Israeli bulldozers destroyed a kindergarten and a women's center in the Bedouin community of "al-Baba Mount" in the southeast of occupied East Jerusalem on the pretext of non-licensing. The 60-square-meter kindergarten consisted of tinplate caravans donated by the EU to the villagers two months ago. The kindergarten served around 28 children. It should be noted that here live about 56 families in the community.

On July 22, 2018, Israeli police secured hundreds of Israeli settlers attacking al-Aqsa mosques in the occupied East Jerusalem Old Town, on the anniversary of the so-called "Temple Destruction". The Islamic Foundation (Awqaf) said that the Israeli forces had established a military block list at the gate of the al-Aqsa mosque and obstructed the worshipers' movement. Eyewitnesses reported that the Israeli settlers attacked Palestinian civilians, journalists and traders in the al-Qataneen market hall, which is located near the al-Aqsa mosque. The settlers also searched some businesses and damaged their contents under the protection of the Israeli police

Use of violence against protest demonstrations against the US President's decision to recognize Jerusalem as the capital of Israel:

Two civilians suffering from their wounds:

Settlement activities and attacks by settlers against Palestinian civilians and property

Feras El-Debs, Head of Media and Public Relation Department in the Islamic Endowments (Awqaf), said that raiding of al-Aqsa Mosque usually happens by entering another group of settlers after exiting the first one from al-Aqsa Mosque, but the Israeli forces allowed all groups to raid the mosque together without waiting for the first to exit al-Selselah Gate. Â He also said that the Israeli police deliberately imposed restrictions on al-Aqsa Mosqueâ€™s worshipers and guards and attacked some of them. He emphasized that groups of Israeli settlers, who were performing prayers at al-Asbat Gate (LionsÂ Gate), obstructed media interviews conducted with the Grand Mufti of Jerusalem and the Palestinian Territories, Sheikh Mohammed Huissen, and the Director of al-Aqsa Mosque, Omar Al-Keswani.

According to PCHRâ€™s fieldworker, few numbers of Palestinian worshipers, who were allowed to enter al-Aqsa Mosque, tried to confront the settlersâ€™ raiding of al-Aqsa Mosque, but the Israeli police prevented them, chased them and threatened them to be arrested. The eyewitnesses also said that the Israeli police arrested Islam Bader Iskafi (14) from al-Aqsa Mosque while raising the Palestinian flag. They also arrested Hamza al-Nabulsi (15) while present in front of al-Asbat gate and Bassam Abu-Nab and Mohammed Abu-Nab while getting out of the mosque.

Furthermore, the Israeli settlers attacked Palestinian civilians, journalists and traders in al-Qataneen Market right, which is located near al-Aqsa Mosque. They raided and searched some shops and damaged their contents under the Israeli policeâ€™ protection. It should be noted that on Saturday, 21 July 2018, the Israeli police closed with steel barriers many roads leading to Jerusalem and the Old City. The Israeli police also provocatively deployed police officer and special Israeli forces in the area to secure the settlers demonstrations, which started from the Old City and headed to al-Buraq Wall.

Recommendations to the International Community

PCHR warns of the escalating settlement construction in the West Bank, the attempts to legitimize settlement outposts established on Palestinian lands in the West Bank and the continued summary executions of Palestinian civilians under the pretext that they pose a security threat to the Israeli forces. PCHR reminds the international community that thousands of Palestinian civilians have been rendered homeless and lived in caravans under tragic circumstances due to the latest Israeli offensive on the Gaza Strip that has been under a tight closure for almost 11 years. PCHR welcomes the UN Security Councilâ€™s Resolution No. 2334, which states that settlements are a blatant violation of the Geneva Conventions and calls upon Israel to stop them and not to recognize any demographic change in the oPt since 1967.Â  PCHR hopes this resolution will pave the way for eliminating the settlement crime and bring to justice those responsible for it. PCHR further reiterates that the Gaza Strip and the West Bank, including East Jerusalem, are still under Israeli occupation in spite of Israelâ€™s unilateral disengagement plan of 2005.Â  PCHR emphasizes that there is international recognition of Israelâ€™s obligation to respect international human rights instruments and international humanitarian law.Â  Israel is bound to apply international human rights law and the law of war, sometimes reciprocally and other times in parallel, in a way that achieves the best protection for civilians and remedy for the victims.

Fully detailed document available at the official website of the Palestinian Centre for Human Rights (PCHR).