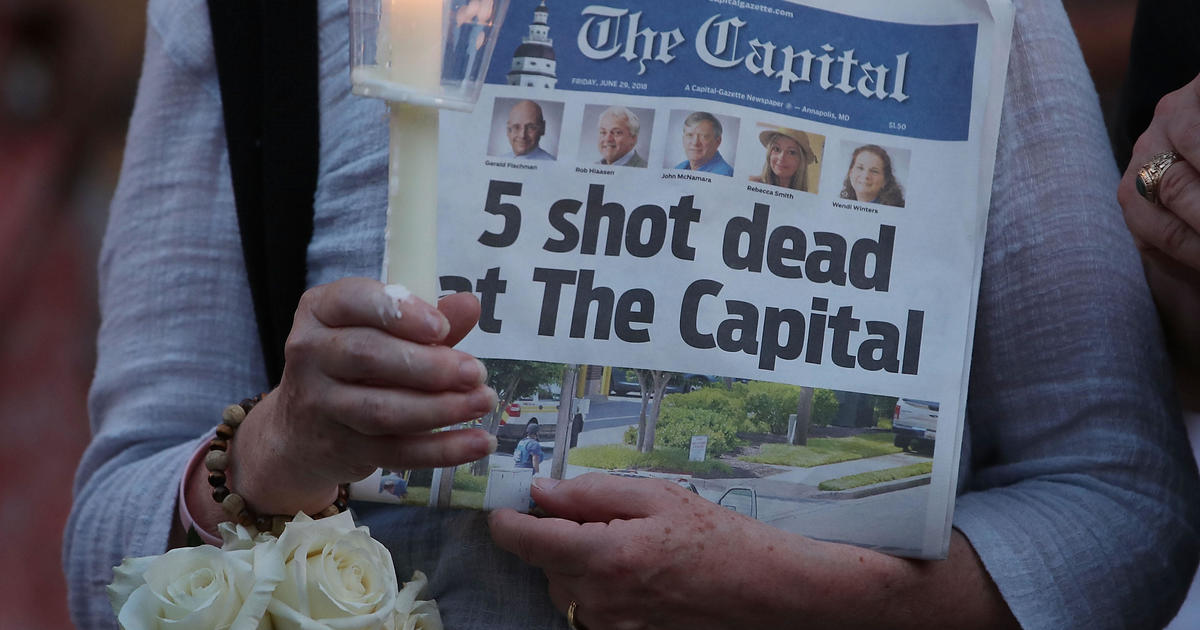 ANNAPOLIS, Md. – Quietly clutching candles or hoisting #AnnapolisStrong signs flocked more than 1,000 people through Maryland's capital, remembering five people working in a newspaper office not only as gatekeepers of the news though as a crucial piece of their close-knit community. Friends, former employees, and people who felt attached to the victims joined a strikingly silent candlelit march on Friday night in honor of employees of the daily The Capital, who had killed one day earlier in one of the deadliest attacks on American journalists had been.

Melissa Wilson, who went to the vigil with her husband Benjamin, their 9-year-old daughter, and their 5-year-old son, said many Annapolis residents have "a degree of separation" from at least one victim.

"The people who made our paper are people we knew we knew, even if we had never met them before," said Benjamin Wilson.

Melissa Wilson's employer has offices in the same building as the newspaper, and her colleagues were there when a gunman methodically pushed through the news room with a 1

The carnage could have been much worse if the police had not arrived and cornered the alleged shooter in less than two minutes, Chip Reid of CBS News reported. They found Jarrod W. Ramos hiding under a table, preventing the police from being his escape plan.

"He was as angry as I've ever seen," said Brennan McCarthy, the lawyer who represented a woman harassed and persecuted by Ramos for years.

McCarthy said the moment he heard about the filming, he knew it was Ramos.

"It was inevitable," said McCarthy. "He wanted to do something violent, the only question was who would he get first."

Ramos was charged with murder in the first instance for murder. The authorities say that he has long had a grudge against the newspaper and is suing him in 2012 after he published an article about him in which he pleaded guilty to harassing a woman. He also sent a flood of menacing tweets that led to an investigation five years ago.

A detective concluded that he was not a threat and the newspaper did not want to file charges for fear of "sticking a stick in a hive".

David Marsters, who worked for the newspaper from 2008 to 2016 and knew four of the murdered employees, said the grief over her death is testimony to the newspaper's special affinity with its readers.

"They were great people who did a great job in the community," he said.

He participated in the march, which ended in a port at the harbor, the "City Dock", where the laughter and the noise of children playing are usually carried by the restaurants, bars and shops. But not on Friday.

"To make it so quiet and so bleak, especially on a Friday night, it's amazing," said Kit O'Neil, describing Annapolis as "a small town with a big heart."

"And the Gazette is their mighty newspaper," she added.

Previously, dozens of mourners gathered in Unitarian Universalist Church of Annapolis to honor community members Wendi Winters and the other victims. The voice of Rev. Fred Muir collapsed as he described the growing fears of Thursday when it became clear that Winters had not survived. He described her as a beloved "pillar of her community".

"Everyone has a story about Wendi Winter, it was a force to be reckoned with," he said.

Muir said the shock and grief had struck Annapolis, a city he described as a small town where many people knew someone who worked in the newspaper.

During the attack, police said Ramos had barricaded the back door of the office to prevent anyone from escaping. His defense lawyers had no comment after he was denied bail in a brief trial. He was put on suicide.

Ramos had repeatedly targeted his employees with angry, profane tweets and launched so many online attacks that then publisher Tom Marquardt called the police in 2013.

"We had given the reception a photo with my personal instructions If anyone who looked like him was coming through the door, they should call 911," he told CBS News.

An investigator held a conference call with a lawyer from the publisher, a former correspondent and editor of the newspaper, the chief of police of Anne Arundel, Timothy Altomare. A police report said the lawyer has produced a lot of tweets in which Ramos mentions "blood in the water, journalists hell, hitman, open season, glad that there will be no murderous shootings, murder career."

The detective, Michael Praley, said in the report that he "did not believe that Mr. Ramos posed a threat to employees" in the newspaper, noting that Ramos had not tried to enter the building and had not sent , direct, threatening correspondence. "

" From this letter, Capital is not prosecuting, "Praley wrote," It's been described as putting a stick in a hive that the officials of the Capital City newspaper do not want. "

Marquardt, the former Publisher said he had talked to the paper's lawyers about getting a restraining order, but not because he and others thought it might make Ramos do worse.

Later, in 2015, Ramos tweeted that he would like to see the paper no longer published, but "it would be better" for two of their journalists to "stop breathing."

Then Ramos became silent for more than two years, Marquardt said. [19659002] "This led us to believe that he had moved on, but for whatever reason, he decided to revive his capital issue yesterday," the former publisher said. "We do not know why. "

The chief of police said new posts were close to killing, but the authorities only knew about them later.

There has been little publicization of Ramos except that he is single, has no children, and lives in an apartment in Laurel, Maryland. He worked for an IT service provider for the US Labor Department's Bureau of Labor Statistics from 2007 to 2014, a department spokesman said.

The rampage started with a shotgun that destroyed the glass door of the open newsroom. Ramos carefully planned the attack and used "a tactical approach to hunt and shoot the innocent people," prosecutor Wes Adams said.

Journalists crept under the desks and described agonizing minutes of horror as they heard the shooter's footsteps and the repeated explosions.

"I was curled up, trying not to breathe, trying not to make a sound, and shooting people around me," said photographer Paul Gillespie, who dived under a desk, The Baltimore Sun, owner of the Annapolis paper ,

Gillespie said he heard a colleague yell, "No!" A firefight followed. He heard the voice of another employee and then another shot.

The boss said Ramos' shotgun was legally bought a year ago, even though he was guilty of harassment. He also wore smoke grenades, the authorities said.