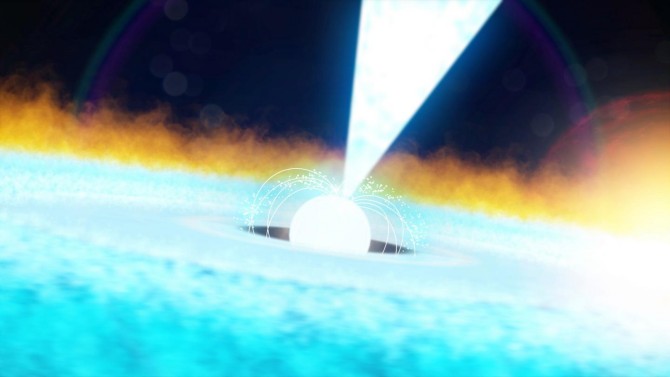 NASA's NICER (Neutron Star Interior Composition Explorer) telescope installed on board the International Space Station discovered a sudden peak in X-rays from space on August 20. The trigger of the eruption was a thermonuclear flash on the surface of a pulsar, the crushed remnant of a star that has long exploded like a supernova.

NICER's brightest X-ray source was from SAX object J1808.4-3658. The observations reveal many phenomena that were never seen together in a single outbreak. In addition, the decreasing fireball briefly increased its brightness for reasons that astronomers still can not explain.

According to Peter Bult, an astrophysicist at NASA, a brightness change was observed in two stages, presumably due to the ejection of separate layers from the surface of the pulsar.

The explosion, which astronomers classify as X-ray explosions, released as much energy as the sun in 20 seconds in almost 1

A pulsar is a kind of neutron star, the compact core that remains when a massive star runs out of fuel, collapsing and exploding by its own weight. Pulsars can spin very fast and host hot spots emitting X-rays at their magnetic poles. As the object rotates and these hot spots pass in front of our point of view, we receive regular pulses of high-energy radiation.

J1808 is located in 11,000 light-years distance in the constellation Sagittarius. It spins at a speed of 401 revolutions per second and is part of a binary system. His companion is a brown dwarf, an object larger than a giant planet but too small to be a star. A continuous flow of hydrogen gas flows from the companion to the neutron star, which accumulates in a huge reservoir structure called the accretion disk.

Every few years discs around pulsars such as J1808 become so dense that a large amount of the gas is ionized. This makes it difficult for the light to move through the plate. The trapped energy then begins an inexorable heating and ionization process that captures even more energy. The gas becomes more resistant to on-streaming and begins to spiral toward the star, eventually falling over the pulsar.

Hydrogen raining on the star surface forms an ever deeper hot "sea". At the base of this layer, temperatures and pressures increase until hydrogen nuclei merge into helium nuclei that produce energy.

Helium accumulates and forms its own layer. Once this ice sheet is a few meters deep, the helium nuclei can fuse under the given conditions to carbon. Then helium explodes and releases a ball of thermonuclear fire on the entire surface of the pulsar.

However, the stars can endure a maximum radiation intensity (Eddington boundary) before they expand through this radiation. And this point depends heavily on the composition of the material that is on the emission source.

In the observed X-ray pulse, the Eddington border appears to be visible for two different compositions. NICER data shows that the x-ray brightness has stabilized for almost a second before slowly increasing again. It was at that moment that the energy of the explosion gathered so much that the hydrogen layer of the pulsar exploded and was thrown into space. The fireball rose for another two seconds and then reached its peak, causing the helium layer to explode more massively. The helium expanded faster, penetrating to the hydrogen layer before dissolving, slowing, stopping and falling back to the surface of the pulsar. After this phase, the pulsar returned briefly to increase its brightness by about 20 percent, but for reasons we still do not understand.