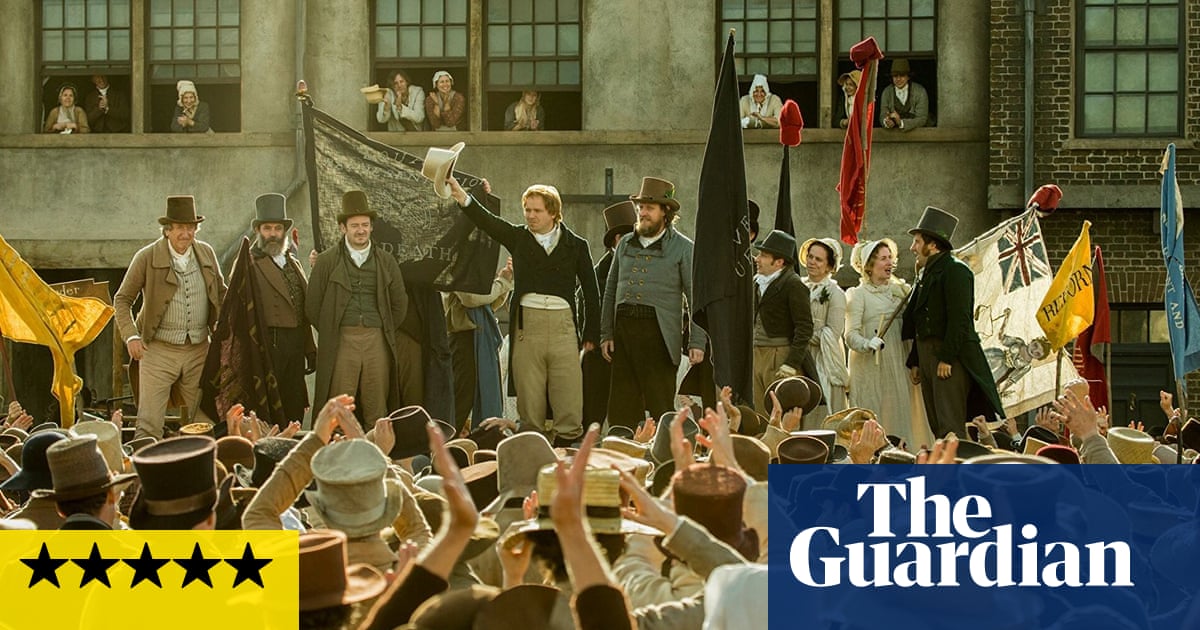 M Ike Leigh brings an overwhelming simplicity and rigor to this historical epic that begins with rhetoric and ends in violence. There is power, sharpness and above all sense for purpose; a sense that the story he needs to tell is important and real and that it just needs to be heard. The film has an uncompromising sincerity, similar to George Eliot's novel Felix Holt as Shelley's The Masque of Anarchy, the poem inspired by Peterloo

6, 1819, what we would today call a pro-democracy demonstration in St. Peter Field, Manchester, an excitable gang of cavalry and yeomanry – whose commander had descended for a day at the races airy – laden with sabers drawn into a crowd of 100,000 unarmed people, many of whom did not escape the enclosed space could. The soldiers killed 18 and injured hundreds more.

It was Britain's mixture of Sharpeville and Hillsborough in the 19th century. The government was very pleased with the result and not dissatisfied with the nickname "Peterloo" as it felt like a repeat of their victory over Napoleon, the creature of something he continued to fear intensely: the French Revolution.

Peterloo was The germ of reform and the eradication of political mendacity and bad faith that underpinned the massacre inspired a new wave of national journalism that spawned the ancestor of this newspaper, the Manchester Guardian. Leigh has complained that Peterloo is not sufficiently taught in the schools and he could be right. There is not much space between the Tudors & n & n; Nazis. I would say that something about Peterloo is not understood much, even if it is not taught. The demonstrators complain about taxation without representation: it was not just the French Revolution that tried to wear down the hussars on St. Peter's Field, but also the American Revolution, which had shown that it was possible for the British To defeat the government. And these people were crazy about hunger anyway, because the grain laws had banned the import of cheap grain from the continent. In 2018, our government plans to store food (and medicines) in case of similar trade restrictions.

Leigh creates a huge, crowded screen, dark in the opening scenes and then colorful for the spectacular and brutal climatic mass sequences. No single story or character outweighs, not even the conceited orator and agitator Henry Hunt, coolly played by Rory Kinnear, who came from London to Manchester with some condescension to the star rotation at the fateful St. Peter's Field Meeting be. "Bring me a light meal!" He says on his arrival to the gaping maid, who whispers, "What's that?"

Hunt is in his own way the dramatic mediator between the government and the ruled, the tyrants and the tyrants. He is the reformer, the radical, but also the rich liberal and middle man. Maxine Peake plays Nellie, the tough Manchester worker who is the mother of Joseph (David Moorst), a young soldier who was stumbled around in the opening scene of Waterloo. With PTSD beaten, he finally comes home to his family and is to find a terrible parallel fate in Peterloo.

Leigh gets rid of Peterloo's great and terrible scene with all his terror, panic and strange, disgusting excitement

Karl Johnson plays the contentious and arrogant Home Secretary Lord Sidmouth, who has a paranoia-inducing network of Spies and provocateurs rule; Robert Wilfort is the treacherously boring Prime Minister, Lord Liverpool, and Tim McInnerny brings a gruesome black comedy into the role of spoiled, bloated Prince Regent. A potato being thrown in his car is being shot by Sidmouth as an attempt to assassinate the abolition of habeas corpus and the renunciation of civil rights.

In Peterloo there are great, magnificent theater moments: especially the Commons and Lord's debates. But that's generally a stern, even grumpy movie. It's about talking: talking, talking and talking in barren rooms and joyless parlors. Political agitation was about speeches; Oratorium was the fuel that led the campaign, or the oxygen that would catch the flame. But without this conversation, the explosive plot would not make a dramatic or emotional sense. Leigh lets himself be torn from the big and terrible scene of Peterloo: with all his fear, panic and his strange, disgusting excitement. Peterloo is like something between Ken Loach's Land and Freedom and Ava DuVernay's Selma. A director like Paul Greengrass might have made the massacre of Peterloo more violent, kinetic and disorienting. Leigh and his cinematographer Dick Pope keep a clearer, calmer look, but it's no less impressive or immersive. David Lean might have been proud to have shot the sequence.

In scenes outside Manchester, Leigh finds an unexpected, even pastoral sadness and beauty. The demonstrators gather in Saddleworth Moor to drill and march – important for maintaining a good order. These men and women, whose lives have been completely transformed and urbanized by the new technology, are moving strangely. They gather in a field and resemble the workers of centuries ago. Two women quietly listen to the eerie, sad music of three violinists. With this richly intelligent, passionate film, Mike Leigh has performed a brilliant retreat on the political battlefield of history.