Photos highlight strong differences in the approaches of Trump and Obama 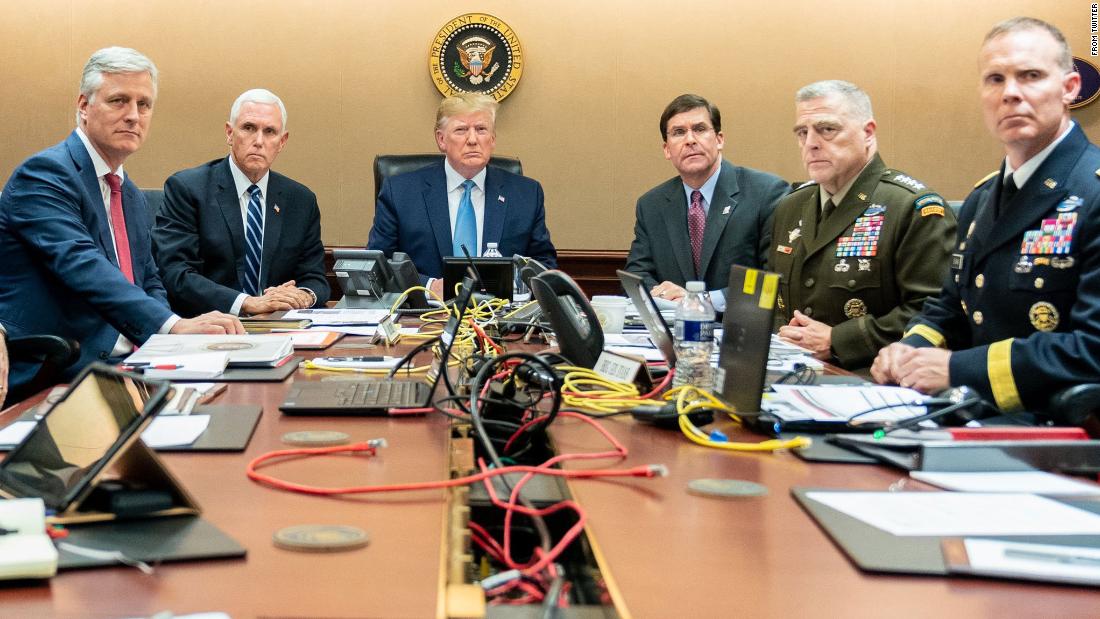 How every leader dealt with the crucial moment says as much about his thinking as about his foreign policy. Before, during, and after the raids that killed two hired terrorists, Obama and Trump took different paths and met with different reactions from the American public.

Both, however, recognized the weight of moments for their heritage. And both wanted it to happen.

"As if you were watching a movie," recalled Trump on Sunday, having announced the death of the ISIS leader graphically in detail.

"We basically observed what was happening in time," Obama told CNN in 2016, five years after Navy SEALs shut down the September 11 mastermind.

It is easy to understand the impulse. The raids that took place in the third year of their presidency pose the possibility of justification and the risk of devastating failure. The legacy of Jimmy Carter, whose mistreatment of an important foreign policy issue ̵

1; the Iranian hostage crisis – could have cost him a second term.
Obama then exercised caution and avoided disclosing details of the raid. Trump endeavored to annoy the news and himself provided much of the detail. And while Obama and his aides were anxious not to ignite Bin Laden's followers, Trump endeavored to end Baghdadi's last moments with a deceptive description of "Whimpering and Crying and screaming all the way "to color.

[19659002] Photos of the two moments capture the leaders on the sidelines. Trump, with a stony face and formal suit and tie, sits at the head of a long situation room table and is surrounded by similarly heavy advisers, some in military uniform, while the raid is carried out on large screens. The literal and symbolic central figure, Trump, projects the sense of authority he often longed for as Commander-in-Chief.

The President's rigid posture and imposing seal contrast with Obama's photo in a polo shirt and a windbreaker. He leaned forward as his team crowded around laptops when Abbottabad heard word that "Geronimo" – the code name given to Bin Laden – had been killed. Obama lying with his corner chair slightly out of center is not the natural focus of the eye.

The photos are taken from different rooms: Trumps was recorded at the John F. Kennedy conference room, the famous command post, which is reproduced in movies and TV programs that inform presidents about highly classified missions.

Obama was briefed in advance of the bin Laden raid from the same location where Trump watches the Bagdadi mission. He was sitting there when Admiral William McRaven, commander of the Joint Special Operations, reported the mission from an outpost in Afghanistan.

Later, as the news spread, he and his team could better see down the hallway to the smaller conference room, where a video feed was played on the General's laptop. There the tableau – overcrowded with others, including Hillary Clinton, who jumped from hand to mouth – was snapped.

If both presidents wanted to see the operations they had personally ordered and fought the most wanted terrorists of their era, there was little else they had in common, such as deciding on the high wire and then increasing the success of the Missions went around.

When Obama took office, Obama made it clear to his first CIA director Leon Panetta that finding Bin Laden was paramount. Nine months before the attack, Obama was informed for the first time that the US had tracked down terrorists on a site in Pakistan. But without certainty Obama remained the choice.

"I was inclined to take the shot early in the discussions, but you hold back the decision until you have to do it, and in the end, what I appreciated was the extent to which we conducted an honest debate," Obama said to CNN in 2016. "In this way, it was a symbol of the President's decision that you always work with probabilities."

Obama At least part of the preparations for the bin Laden mission to fine-tune jokes for this year's White House Correspondent Dinner – including beating Trump, whose relentless and racist quest for Obama's birth certificate had prompted Obama to publish this week. He approved the mission later that week.

As a tuxedo, Obama trashed an uninvited trump for his decision in the reality show – "You fired Gary Busey!" – His team made the final preparations for the raid, which would start in a few hours.

In the meantime, Trump began discussions about possible operations to eliminate Bagdadi in recent weeks, when surveillance revealed that the ISIS leader was on a site near Idlib, Syria. He was presented options for a raid on the site last week and he made the decision to move on.

On the day of the raid, he woke up at Camp David after holding a jubilee celebration for his daughter and son-in-law, and played golf with his Senator Lindsey Graham and Major League Baseball commissioner at his golf course in Virginia and returned at around 4:30 pm Watch back to the White House ET. The group gathered in the situation room 30 minutes later.

Unlike Obama, who returned to the White House residence to play cards when the Navy SEAL team flew from Afghanistan to Pakistan and only returned when they were down, Trump stayed for the duration of the mission in the situation room.

When asked on Sunday to describe the difficult choices he had to make on his way, Trump said, "Well, only death."

"I send a large number of brilliant fighters – these are the greatest fighters in the world," he said.

On Saturday night – when the US commandos safely returned from the mission to the US – an unidentified base – Trump offered a cryptic tweet: "Something very big has just happened " Shortly thereafter, the White House said he would have a "big announcement" the next morning.

"This was to tell you that you have something big this morning so you would not play golf or tennis or otherwise be dissatisfied," Trump later said.

There was a debate among his national security advisors about whether it was too early to win, as there was iron evidence that it was Bagdadi who died in the mission. Trump itched, however, to announce the news. And media reports soon appeared about the mission in Syria and its destination.

Ultimately, Trump was convinced by the advisors that the announcement of Baghdadi's death would attract more attention on Sunday at 9:00 am – at the beginning of weekly political programs. It also gave US officials more time to check the destination.

Obama's aides also discussed whether to announce the bin Laden raid in the evening or the next morning. Almost everyone supported the wait – including Obama, who wanted additional confirmation that Bin Laden had been killed.

After McRaven had told him one of the SEALs on the mission, the same size as bin Laden, he lay beside the body to confirm her size, Obama wanted more evidence: he told him to get a tape measure ,

Eventually news reports about a US helicopter crash in Pakistan emerged, whose government called on the White House to announce the news. With a few hours to go, Obama delivered a nine-minute speech announcing the "targeted operation" in Pakistan but announcing only a few details.

"Today's performance is proof of the greatness of our country and the determination of the American people." he said from the White House cross hall with the long red carpet behind him. Cheering crowds gathered in front of the White House.

Trump's prepared utterances were of similar length but wildly different tone. Trump described Baghdadi as a "sick and corrupt man" who died "running and weeping" and bluntly finished his prepared section.

He died like a dog. He died like a coward. The world is now a much safer place. God bless America. Thank you, "he said, before asking questions in the White House diplomatic reception area for more than 40 minutes, and there were no cheering crowds outside the White House, and Trump was booed when Trump joined Game 5 of the World Series that evening. [19659002AmongthephonecallsObamaplacedafterbinLaden'ssuccessfulraidwashisownpredecessorGeorgeWBushwhoatesouffleswithhiswifeinLondonDallaswhenitbecameknownthatObamawastryingtoreachhim[19659002] "Good name," Bush said to his successor, after hearing details about the mission that killed the terrorist he spent most of his presidential hunt for.

Trump According to Aides, he has no similarity Called Hogan Gidley, a White House spokesman, said he was "not aware of any communication about the Bagdadi mission between Trump and Obama." An Obama spokesman not erte need to do.

Trump offered little reconciliation on Monday during his remarks in Obama's hometown.

"He should have been killed years ago," he said of Bagdadi during a speech to police chiefs in Chicago. "Another president should have had him."