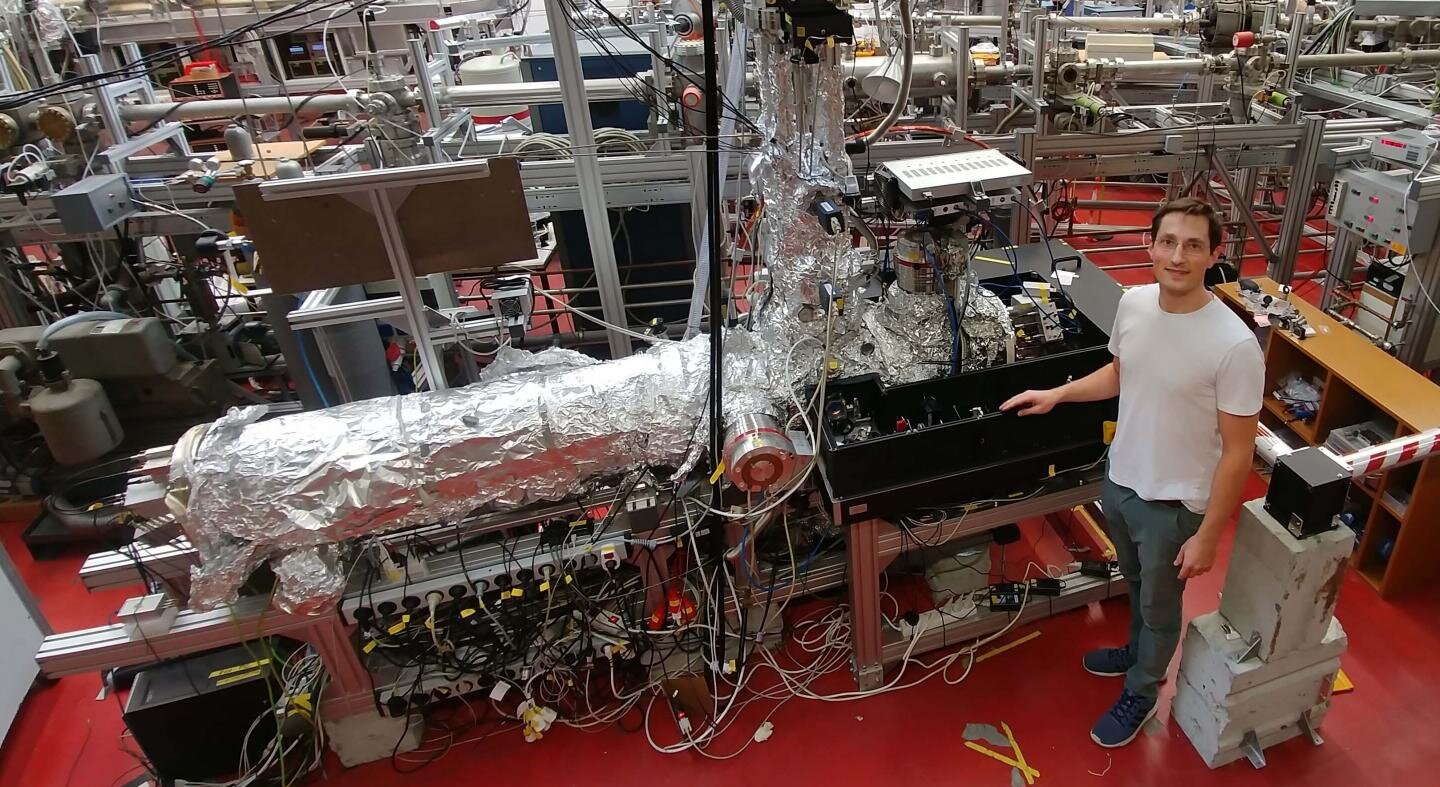 Albert Einstein received the Nobel Prize for explaining the photoelectric effect: in its most intuitive form, a single atom is irradiated with light. According to Einstein, photons that transfer only quantized energy to the atom of the atom. If the photon's energy is sufficient, it hits the electrons out of the atom. But what happens to the photon's momentum in this process? Physicists at Goethe University are now ready to answer this question. To do so, they have developed and constructed a new spectrometer with previously unattainable resolution.

Doctoral student Alexander Hartung became a father twice during the construction of the apparatus. The device, which is three meters long and 2.5 meters high, contains approximately as many parts as an automobile. It is located in the Experiment Hall of the Physics Building on Riedberg Campus, surrounded by an opaque black tent inside which is an extremely high performing laser. Its photons collide with individual argon atoms in the apparatus, and

The device is a further development of the COLTRIMS principle that has been invented in Frankfurt and has meanwhile spread across the world: it consists of ionizing individual atoms, or breaking up molecules, and then precisely determining the momentum of the particles. However, the transfer of the photon momentum to electrons predicted by theoretic calculations is so tiny that it was not possible to measure it. This is why Hartung built the "super COLTRIMS."

When photons from a laser pulse bombard at argon atom, they ionise it. Breaking up the atomic power consumptions the photon's energy. The remaining energy is transferred to the released electron. The question of which reaction partner (electron or atom nucleus) conserves the momentum of the photon has occupied physicists for over 30 years. The simplest idea is this: as soon as the electron is attached to the nucleus, the momentum is transferred to the heavier particle, ie, the atom nucleus. explains Hartung's supervisor, Professor Reinhard Dörner of the Institute for Nuclear Physics. This would be analogous to wind transferring its momentum to the sail of a boat. As long as the sail is fixed, the wind's momentum propels the boat forward. The instant the ropes tear, however, the wind's momentum is transferred to the sail alone.

However, the answer that Hartung discovered through his experiment is-as is typical for quantum mechanics-more surprising. The electron not only receives the expected momentum, but also one third of the photon momentum that actually should have gone to the atom nucleus. The sail of the boat therefore "knows" of the impending accident before the cords tear and steals a bit of the boat's momentum. To explain the result more precisely, Hartung uses the concept of light as an electro-magnetic wave: "We know that the electrons tunnel through a small energy barrier." the laser, while the magnetic field transfers this additional momentum to the electrons. "

Hartung uses a clever measuring setup for the experiment. To ensure that the additional momentum of the electron is not accidentally due to an asymmetry in the apparatus, he had the laser pulse from the two sides: either from the right or the left, and then from both directions simultaneously, which was the biggest challenge for the measuring technique. The new unexplored role of the magnetic components of laser light in atomic physics.