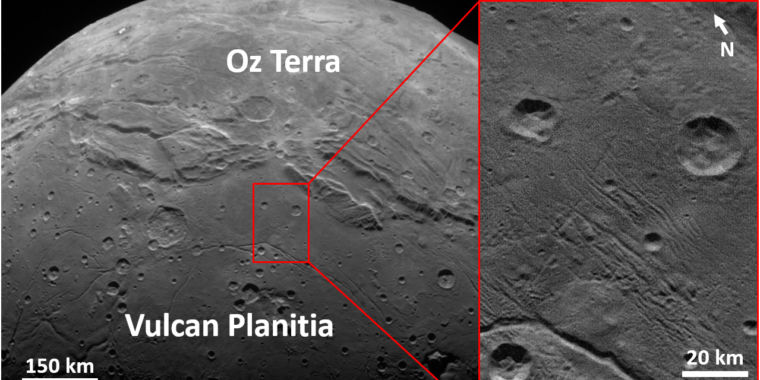 What did the first bodies of our solar system look like and what was their fate? It is difficult to say, because it is not clear that there are any. Much of the earliest material was turned to the planets. Many of the smaller bodies left are the result of multiple collisions and may have formed and reshaped several times ̵

1; some are little more than heaps of debris hardly held together by gravity.

Without knowing anything about what these bodies looked like It is difficult to determine if our models of early solar physics are correct and if similar processes are likely to be involved in exosolic systems.

Now, some researchers have found a way to determine the size of existing objects in the early solar system: looking at the craters they left behind when they met Pluto and Charon. The results point to a shortage of objects less than 2 km in diameter, suggesting that much of the material in the Kuiper belt has been quickly swept up into larger objects, avoiding smash into each other and releasing a new generation of smaller fragments.

It is relatively easy to model the behavior of the dust and ice particles that orbited around our then-forming sun. A key factor in their possible accuracy is the ability to shape planetary objects, knowing that this was the ultimate fate of the solar system. But it's harder to understand the Kuiper belt because there are no big planets and our telescopes are not good enough to get a good feel for how many small objects there are.

Kuiper belt formation models are not much help. Depending on the original assumptions, they sometimes create many small to medium sized objects, which are often fragmented by further collisions. Change the assumptions of the model, and you get the rapid growth of large bodies, reducing the likelihood of collisions and limiting the presence of smaller bodies. Without a sense of the size distribution of today's Kuiper Belt objects, it is difficult to find which of these models is closer to the right.

One way to control the size of objects is to look at the marks they leave on other objects. Larger objects will leave larger craters behind when smashing into a planet or a moon. So, if you check the size of the crater, you can see what's in the immediate vicinity. We've done that with the moons of Jupiter and Saturn, but both have probably seen implications for both the Kuiper Belt and asteroid objects. Everything that has an obvious surface in the solar system is largely a pixellated blur.

That changed as New Horizons swept past Pluto, delivering the first detailed images of him and his moons. Many of them were high enough to allow a detailed crater count, so a huge team of scientists could now take a look at what hit the dwarf planet and its largest moon, Charon.

One The challenge of the project is that Pluto is geologically active. Sputnik Planitia, Pluto's heart-shaped airplane, is a mass of slowly swirling nitrogen ice; There are essentially no craters at all. In contrast, Charon's Vulcan Planitia seems to have seen extensive cryovolcanism. However, this happened early enough in the history of the body, so the area is full of craters. To cope with these types of differences, researchers conducted several analyzes, each for a single-terrain area. If one of these craters destroys craters of a certain size, it should stick out.

Regardless of where they looked, the same general trend was obvious: there were not enough small craters. From a distance of about 10 km, the crater speed is what you would expect for a smooth distribution of impactor sizes (ie you expect less large objects). But under 10 km, things are pretty dramatic.

The researchers went back and looked at the kind of processes that could selectively erase small craters and came to nothing. The freezing of gases from the atmosphere could fill Pluto with smaller craters, but Charon has no atmosphere. In a region of Pluto, there are fewer small and partially filled large craters, but not the rest. Cryovolcanism appeared to have originated in Charon's early history, but was stopped fast enough that the volcanic areas have a large collection of craters.

Overall, however, the lack of small craters seems to be real. As you move from the size of the crater to the impactor, fewer than expected Kuiper belt objects appear to be less than one kilometer in diameter. A group of bodies that are in "collision balance" – that is, they shatter enough to produce an even size distribution – would have many more small objects. The crater count thus seems to indicate that most of the objects in the Kuiper belt will be original; They have survived unscathed since the beginning of the solar system. This, in turn, means we're likely to get a picture of the early solar system at each comet sampling.

The analysis also implies that the processes that built objects of the Kuiper Belt effectively transported the mass to larger objects. There are models that do this by starting with an uneven distribution of the starting materials, which is amplified by the gravitational forces they generate. And although these results are specific to the Kuiper belt, it is likely that similar physics will be applied to other areas of the solar system.