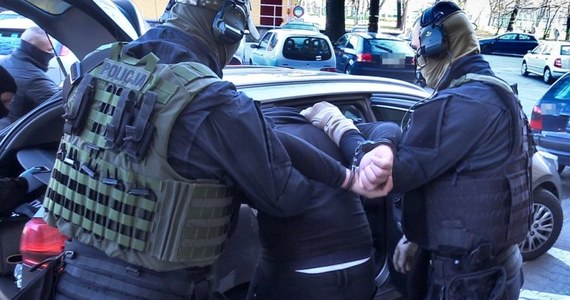 The District Court in Krakow has made a decision on a temporary 13-person detention center linked to the environment of the hooligans of Wisła Sharks – she learned from PAP. It is a group of people detained by the Central Bureau of Investigation. Among them is the former Vice President of Wisła Kraków.

Photos of the action to stop hooligans.
/ Police

The Central Bureau of Police Investigations was arrested on Tuesday.

As the PAP found out in the press office of the Cracow district court, the district court ordered on Thursday a three-month detention center for 1

2 people from this group. A second person was detained for two months.

Among the detainees were Damian D., former vice-president of the Wisła Kraków Club, which is responsible for the administration of an organized criminal group.

Over 170 officials participated in the Tuesday action organized by police officers from the Central Bureau of Police and Police Headquarters in Krakow. The activities were supported by police officers from the Office of Anti-Terrorist Operations of the Police Headquarters and anti-terrorists from the provincial capitals Rzeszów, Wrocław, Katowice, Lublin, Białystok, Radom, Olsztyn and Bydgoszcz

According to the media, imprisonment was possible because he decided to work with the police as leader of the hooligan gang of Wisla Krakow Paweł M. ps. "Misiek", imprisoned in Italy at the end of September

M. he has already heard allegations of managing an organized criminal group and drug offenses, as well as robberies with a dangerous tool in the form of a thug and machete and two blows with serious bodily injuries. "Misiek" did not plead guilty; He has a prison term of up to 15 years. He is currently in custody and has been extended until mid-July. The media report that thanks to cooperation with the police, they can expect an extraordinary reduction in punishment.

A special group to solve the case of hooligans appointed a police chief. The Spec group consists of police officers from the Central Investigation Bureau of Police and the provincial police headquarters in Krakow. These police officers, along with prosecutors specializing in organized crime, collected all the information and analyzed it thoroughly – PK informed.

It has also been recalled that current research suggests that members of the criminal group could operate between 2007 and 2018 "sharing the benefits of crime according to the hierarchy established in the gang". At that time, they were likely to produce amphetamine and distribute it as well as cocaine and marijuana in almost the entire country. Despite the hermetic nature of the group, the police found that the detainees were able to administer a large number of different drugs. – added

As a result of the activities supervised in May 2018 by police officers of the Bureau Board in Krakow, eleven people were arrested one organized criminal group and another wanted for another case), and in Małopolskie voivodeship A total of 13 sites were searched, including the premises of one of the sports clubs.

The text published on Wednesday by the Onet.pl portal recalled earlier offenses. In 2000, hooligans were supposed to admit. As determined by journalists, 15 people lost their lives, including fans of Wisła and Cracovia as well as completely random victims. These people mainly died from blows with a knife or an ax or were tortured to death.

One of the high-profile cases was the fatal blow to Connc's followers Cracovias, Tomasz C., ps. Man. The 30-year-old was attacked in 2011 in one of the Krakow settlements, where about a dozen people who came by car, waiting for him. When the victim came with a car, the assailants followed. During the escape, Tomasz C. lost control of the vehicle and hit the building; He wanted to run away on foot and tried to hide in the cabin of the garbage truck. There he was caught by the attackers and stabbed with a knife, machete, pitchfork and clubs. Due to wounds he died shortly after transport to the hospital. More than ten people heard the case.

Minister of Defense: The KOD in front of the Tomb of the Unknown Soldier is an absolute scandal