Breaking News
Home / Poland / Four people are dead after the storm of Thursday, 34 are still in hospitals

Four people are dead after the storm of Thursday, 34 are still in hospitals 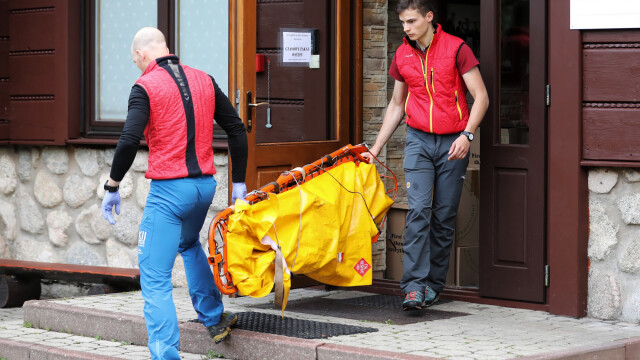 Four people are dead, 157 are injured, 34 are still in hospitals. This is the record after the violent storm that hit the Tatras on Thursday. From the morning 16 people were searched. Everyone found each other.

Drama in the Tatra …

On Thursday after the storm, 157 people were helped in several hospitals. – This is a huge scale, which was not recorded in the mountains and with the exception of earthquake catastrophes probably never – says Jan Krzysztof, head of the voluntary Tatra emergency service.

He reported that all the needy were overthrown in four hours.

This is a situation that can be compared to a terrorist attack. A large group of random people was hit. There were a number of people, including children. Burns, broken legs, wounds all over. In a short time it is possible to control it with the help of all services – he emphasized.

Among the victims, there is, among other things, a man who has revived another under one of the mountain ranges. – When the next dismissal took place, he was crushed. Nothing happened to him. Despite the dramatic situation, these people rushed to help others – says Tomasz Wojciechowski, on-duty TOPR savior.

34 people are still in hospitals

34 people are still in hospitals in Krakow, Nowy Targ, Zakopane, Limanowa and Sucha Beskidzka. Her injuries vary from trauma, such as skull burns, to multi-organ injuries.

According to Dr. Małgorzata Czaplińska, deputy director of the Zakopane Hospital, was treated at the Zakopane hospital in 5-6 hours as many patients as it normally does on one day. They were treated by 90 people, including 40 doctors.

– The biggest difficulty was transferring patients to other facilities. It went smoothly. All services worked – stressed.

Most patients are in good general condition.

– There are still 22 people in our wards. You are in general surgery, paediatrics, cardiology, orthopedics, internal medicine. We still have five people in the emergency department of the hospital. You will probably be fired within 24 hours, "said Czaplińska.

The parents of two deceased children are in the hospital. – They are in psychological and pastoral care – said Czaplińska.

"It was a great challenge"

– This action was a big challenge – admits Jan Krzysztof, head of TOPR. Up to 80 TOPRs were involved in the campaign, most in the Giewont region, as well as members of the GOPR Podhalańska group and firefighters. – We estimate that about 180 people participated in the action. The entire campaign was coordinated from the outset by TOPR. That was our job. Other services that helped us did our best. It was a very good cooperation. I'm proud of the rescuers – said Jan Krzysztof.

The action involved five helicopters – one TOPR working in the highest parts of the mountains and four Air Rescue. The TOPR helicopter was still working during the storm when it flashed. – The risk of working near Giewont was very high. Fortunately, none of them happened – admitted Krzysztof.

He reported that the Hala Kondratowa Animal Shelter became a huge hospital where patients were selected and wounded. – The restaurants have delivered the meals themselves. This support was important to us. We had so much work that all our free hands were filled – handed over to the head of TOPR.

It is still being checked if missing persons are present. – We hope that the four people who died yesterday, including two small children, are the last to die – said Krzysztof.

They Searched for 16 People

How the voivode of Małopolska informed Piotr Ćwik in the morning on Radio Krakow In the evening and at night the owners of Podhale leisure centers reported that 16 people were not returning to them. We have already managed to contact everyone. [194559]

– We must be ready for any action. In the morning I saw many busy people go to the mountains … – said Krzysztof.

And reminded to check the weather forecast before using the mountains and to use the applications available on the mobile phones. – There are tools that you only need to use for your own safety. We hope that conclusions will be drawn after yesterday's events – he said.

A special hotline has been set up on telephone numbers (18) 201 71 00 and (18) 202 39 14, which you can call on victims. – These phone numbers also provide psychological help. Psychological support can also be obtained in the hospital in Zakopane – says Joanna Paździo, spokeswoman for the voivode.

The tourist trail to Giewont has been closed until further notice.

A bus accident with children in Pomerania. More than a dozen people were injured

Biden says how much “nuns inspire him”. At the same time, he plans to blame the little sisters of the poor

Ombudsman in the Sejm: These changes call into question our future in the European Union