Breaking News
Home / Poland / Krystian Markiewicz, head of justice over Łukasz Piebiak, who is said to be behind the hatred of the judges

Krystian Markiewicz, head of justice over Łukasz Piebiak, who is said to be behind the hatred of the judges 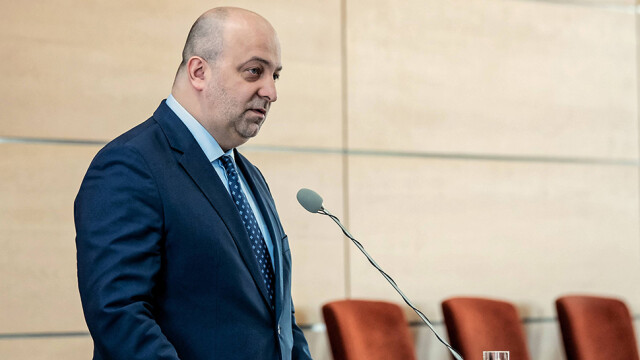 It is inconceivable that the Deputy Minister of Justice, with the consent of Justice Minister Zbigniew Ziobra, did, accepted or encouraged such things – said Krystian Markiewicz on TVN24, chairman of the Union of Polish Judge "Lady Justice". In this way, he commented on the results of Onet, which revealed that the Deputy Minister of Justice Łukasz Piebiak "arranged and controlled the action", which should discredit among others Markiewicz.

A SPECIAL EDITION AT ANTENNA TVN24

Judge Krystian Markiewicz becomes a guest of "Facts after Facts" at 19:25 on TVN24

Onet has noted that Deputy Minister of Justice Łukasz Piebiak is behind an organized hatred of judges, who criticize the changes introduced by the United

One of the measures was to discredit the head of "Iustitia" Krystian Markiewicz. According to the findings of Onet, a woman named Emilia, who worked with Piebiak, was responsible for sending compromise material (the Onet editorial staff knows their name, but does not publish it). READ MORE >>>

Markiewicz: For me it's absolutely scary

– I'm sorry that my former colleague, with whom we've done many good things, behaves like this – Krystian on TVN24 added to Markiewicz.

– On the other hand, it is absolutely alarming to me that in the Ministry of Justice a certain system has been established in the state aimed at destroying certain persons and persons you want for them Rule of law, fight for justice – he stressed.

He estimated that "it is unbelievable that something happens in Poland in a democratic constitutional state".

He stressed that it is unthinkable that "personal data will be removed" about me, perhaps from the district court to share with third parties, that later part of the hate correspondence not only to my home, comes to me after several In fact, hundreds or thousands of judges in Poland are sent to "Lady Justice" everywhere.

Markiewicz pointed out that "we do not know the extent of the case". – We know from these statements that the activity involved at least 20 judges, and the question is how many we do not know – he added.

– This is pathology. It resembles acts that were known in Poland's worst years of communism – judges judge.

In an exchange of letters with deputy minister Piebiak, mentioned by Onet, the woman wrote:" I will talk to journalists and send letters. Anonymous, via e-mail. But also letters. The only problem is that I have no addresses I will do everything I can, as always. I will not vouch for the result, but I will try. I hope they do not use me.

Lukasz Piebiak should answer her: "We are not committed to doing good. "

– I think the judge (Piebiak – ed.) Has forgotten that he is still a judge, because possibly the so-called" planting "is not about the Ministry of Justice, but about courts, even if The Ministry would like to see this differently – judges Krystian Markiewicz.

– What we have been doing for many years as a "justice lady" is the fight for the rule of law, guaranteeing everyone the right to a court and not one or the other Politician decides whether he destroys one's life or not – he stressed.

Video: tvn24 Markiewicz: Since "Putten" is not the Ministry of Justice, but there are courts

Onet: We have evidence of the consent of the Deputy Minister [19659036] In order to discredit with the chairman of the "Lady Justice", should be called the "Emilia" Woman pass on information about his personal life, which slandered him, to the branch offices of the association and the media. According to Onet's publication, the letter should also be sent to Markiewicz himself at his home address, which he received from Piebiak.

Onet assures that he has evidence that the Deputy Minister "fully approves this plan before its implementation". According to the portal, information about Markiewicz "was based on an anonymous history of rumors, rumors and conjectures about his private life, including intimate contact with women and opportunities to build his position in the judiciary."

The portal published two screenshots of visible messages exchanged between Emilia and Piebiak, as he writes. In an interview with Onet, Emilia admitted that "she is very ashamed of what she did and her actions could have hurt at least 20 judges".

“There is a visible reduction in the number of severe coronavirus cases.”

Elections in the PO club: it is known who will replace Borys Budka

15 hours of hearing a parliamentary expert. He wrote about the premiere